HARRISBURG — More than 70 Republican lawmakers including leaders in the Pennsylvania House are asking the state’s congressional delegation to reject electors for Joe Biden after conceding the General Assembly could not appoint its own.

GOP lawmakers signed a letter addressed to the state’s U.S. representatives and senators, arguing that actions by Gov. Tom Wolf’s administration and Department of State have “undermined the lawful certification” of its Electoral College voters.

The effort is just the latest among many by GOP members to cast doubt on the integrity of Pennsylvania’s new vote-by-mail process and the November election. Both state and county election officials say it was conducted with no major irregularities or issues.

To start the process of rejecting electors, at least one U.S. House member and one U.S. senator would have to sign an objection, according to the Congressional Research Service. In a statement to the Associated Press, Republican Sen. Pat Toomey’s office said he “will not be objecting to Pennsylvania’s slate of electors.”

Pennsylvania’s other senator, Bob Casey, is a Democrat.

With bipartisan support, the legislature in 2019 approved no-excuse mail voting as part of a long-awaited update to the Election Code. November was the first general election during which universal mail voting was an option in the state. 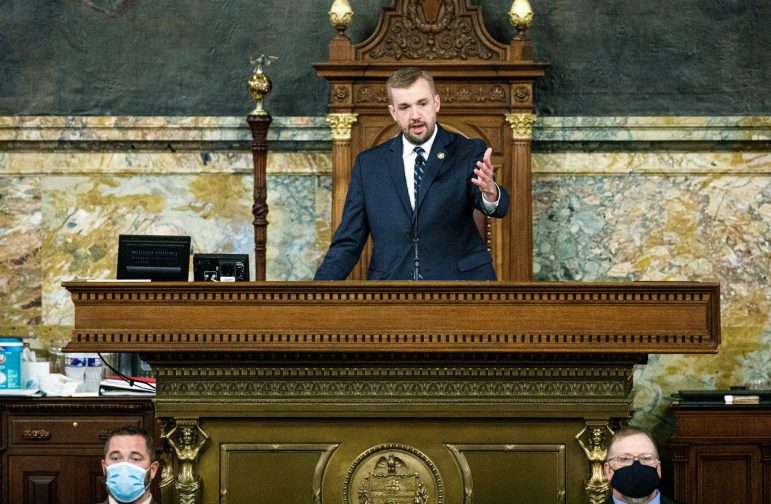 In the letter, the lawmakers claim guidance from the Department of State and Secretary Kathy Boockvar on how to treat mail ballots with some sort of issue–like a missing signature or secrecy envelope–undermined the intent of the law.

They also note that, by law, mail ballots must be received by 8 p.m. Election Day in order to be counted. But at the request of state Democrats, the Pennsylvania Supreme Court extended the deadline by three days, citing possible delays with the U.S. Postal Service and an anticipated surge in voter turnout.

Republicans say the Democrat-controlled court legislated from the bench and usurped lawmakers’ power.

Pennsylvania’s electors for Joe Biden were certified on Nov. 24, and Gov. Tom Wolf prepared a Certificate of Ascertainment for the national archivist with the names of the appointed electors and the number of votes cast for each candidate. Biden defeated Trump by 80,555 votes.

Electors are typically state and local elected officials, party leaders and others who traditionally have strong connections to the party. Attorney General Josh Shapiro and Democratic state Reps. Malcolm Kenyatta and Jordan Harris are on the Democratic list of Biden electors.

They are scheduled to meet in their respective capitals at noon on Dec. 14. In Harrisburg, 20 electors are expected to cast their votes for President-elect Biden and Vice President-elect Kamala Harris.

According to the National Conference of State Legislatures, each elector votes on their own ballot and signs it. Copies of those ballots go to the president of the U.S. Senate–Vice President Mike Pence–the Pennsylvania secretary of state, the national archivist and the presiding federal district judge in Harrisburg by Dec. 23.

A spokesperson with Boockvar’s office said details of the electors’ meeting in Harrisburg are still being worked out to adhere to safety protocols related to COVID-19.