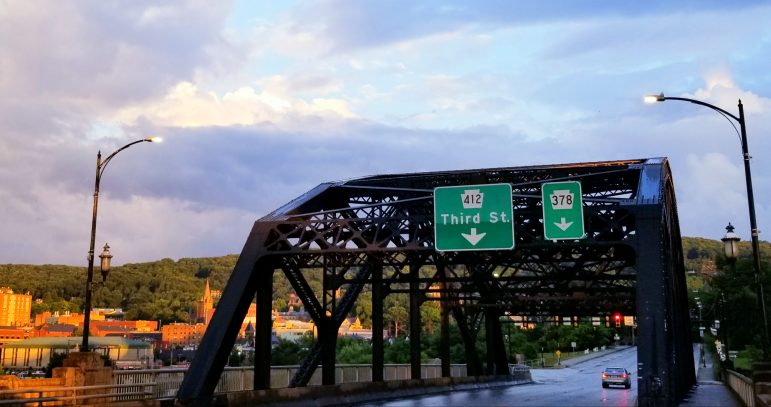 The nearly 100-year-old Hill-to-Hill Bridge in Bethlehem is in need of rehabilitation and expansion. PennDOT planners have proposed constructing a second, partial span to the east of the current bridge, which carries more than 55,000 vehicles a day.

Earlier this month the department announced the start of planning and design work on a rehabilitation and expansion project for the Hill-to-Hill Bridge, which carries State Route 378 over the river, connecting the “spur route” highway section with Wyandotte Street.

Repairs are needed due to the age of the bridge, which was constructed over a period of three years, from 1921 to 1924. Planners also want to address concerns related to heavy congestion on the bridge, where traffic backups have become frequent in recent years.

“The bridge carries more than 55,000 vehicles per day and is a critical transportation feature for both the region and the City of Bethlehem,” PennDOT planners said during a virtual public meeting that was held recently.

They then presented four alternatives they considered during the planning process.

They also considered the potential impact to historic features of rehabilitating the bridge.

The Hill-to-Hill Bridge is eligible for inclusion on the National Register of Historic Places due to some of its defining architectural features, such as its closed-spandrel arches and two Hudson Truss spans. The iconic Fritch Fuel Company time and temperature sign along the east side of the bridge is also eligible for inclusion in the National Register.

Planners said they want to leave these defining features intact if possible. 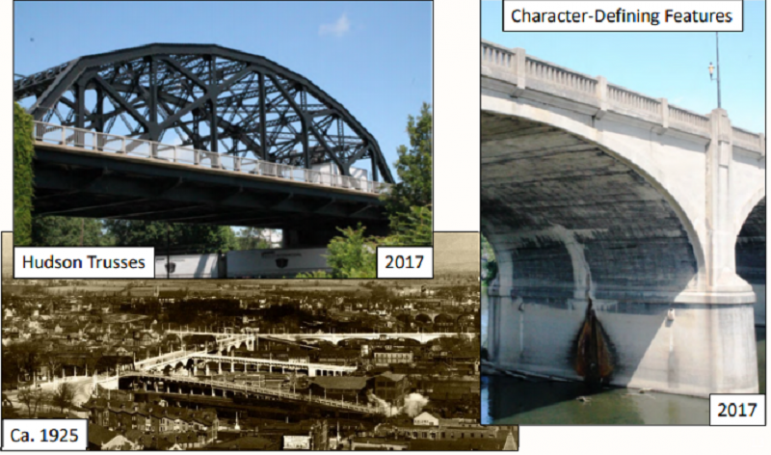 The Hill-to-Hill Bridge’s two humpbacked Hudson trusses, as well as other defining architectural features, make it eligible for inclusion on the National Register of Historic Places. PennDOT planners want to leave these defining features intact.

Ultimately, planners said they preferred an alternative solution which would involve constructing a new partial span on the southern end of the bridge.

The new span would attach to the east side of the existing bridge, adjoining it to the Second Street ramp.

“The new eastern structure would be constructed to support two northbound travel lanes and a sidewalk,” planners said during the virtual meeting. “The new structure would taper back and tie into the existing structure just before the northern truss.”

Planners favored this alternative for its balanced approach between accomplishing the project’s needs and minimizing effects on the surrounding land, features and resources.

The plan addresses traffic congestion issues by adding a left turn lane to the Second Street ramp as well as a right turn lane to westbound Third Street.

“Based on our preliminary traffic analysis, these are the most impactful ways to address the congestion need,” planners said.

The plan includes structural improvements such as repairs to the existing trusses and a concrete overlay on the roadway. The new structure will also feature a six foot-wide sidewalk for pedestrians and cyclists.

Planners also favored this alternative for its limited impact on historic features. The partial span allows both trusses as well as the Fritch Company sign to be maintained.

A drawback to the favored plan is that the new structure would require additional piers and abutments to be constructed, which would affect the U.S. Army Corps of Engineers levee, Sand Island Park and the Lehigh River. 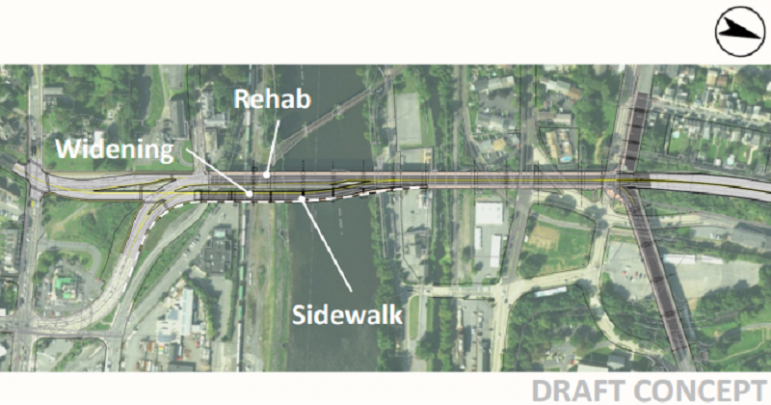 An aerial draft plan shows the proposed new partial span on the southern end of the Hill-to-Hill Bridge. The new span will connect to the Second Street ramp at the bridge’s south end, and will support two northbound travel lanes and a sidewalk.

Planners also strongly considered an alternative plan to construct a new span running the entire length of the current Hill-to-Hill Bridge. This alternative would have resulted in each bridge carrying travel lanes in opposite directions.

Although a complete second span has advantages, planners noted that it would have the greatest impact on nearby private property as well as the greatest potential to affect the appearance of the bridge.

A complete second span would also result in the removal of the Fritch Company sign and silos, and would cost nearly twice the estimated cost of the partial span alternative.

“The project is currently projected to be funded with 80 percent federal dollars,” said Ron Young, PennDOT’s press officer for Engineering District 5. “The cost estimate is around $74 to $75 million, of which an estimated $56 to $60 million will be for construction.”

Young said the project team had not studied how the new span would impact traffic south of the Hill-to-Hill Bridge, where motorists traveling to and from the Saucon Valley region via Rt. 378 (Wyandotte Street) often deal with traffic backups in the area of Five Points.

Anyone wishing to pursue a project in that area would need to propose it to the Lehigh Valley Transportation Study.

The project plans will remain on display through May 7. The public is invited to view them and provide input, questions or concerns until then. 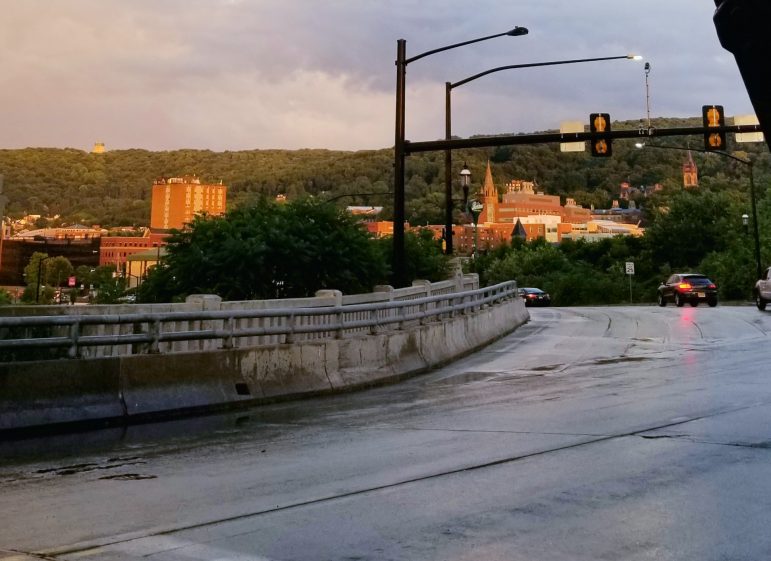 The design of the Second Street ramp to the Hill-to-Hill Bridge in Bethlehem, above, would be altered by PennDOT’s plan to expand the bridge with a second, partial span just to the east of and adjoining the current structure. The nearly 100-year-old bridge is overburdened by carrying more than 55,000 vehicles a day; far more traffic than it was built to handle in the 1920s.