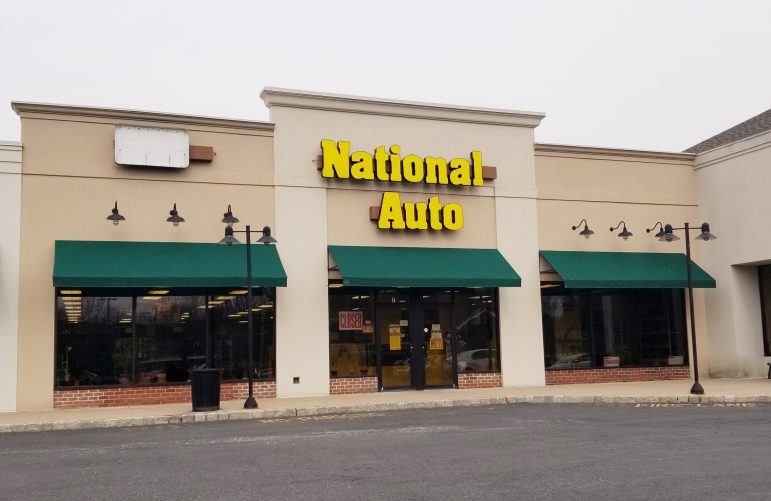 The National Auto Store in Hellertown is closing Friday. The store is currently holding a Going Out of Business sale.

The closure of a Hellertown auto parts store later this week will mean yet another vacancy in a local shopping center that already has a high vacancy rate.

National Auto Stores will permanently close its store in the Shoppes at Hellertown on Main Street this Friday, according to a sign on the front door.

The sign didn’t specify whether all National Auto Stores are closing Friday, but an employee confirmed that they are and other evidence suggested that to be the case.

The National Auto Store at 1814 Tilghman Street, Allentown, had a “store closing” sign identical to the one at the Hellertown store taped to its front door. 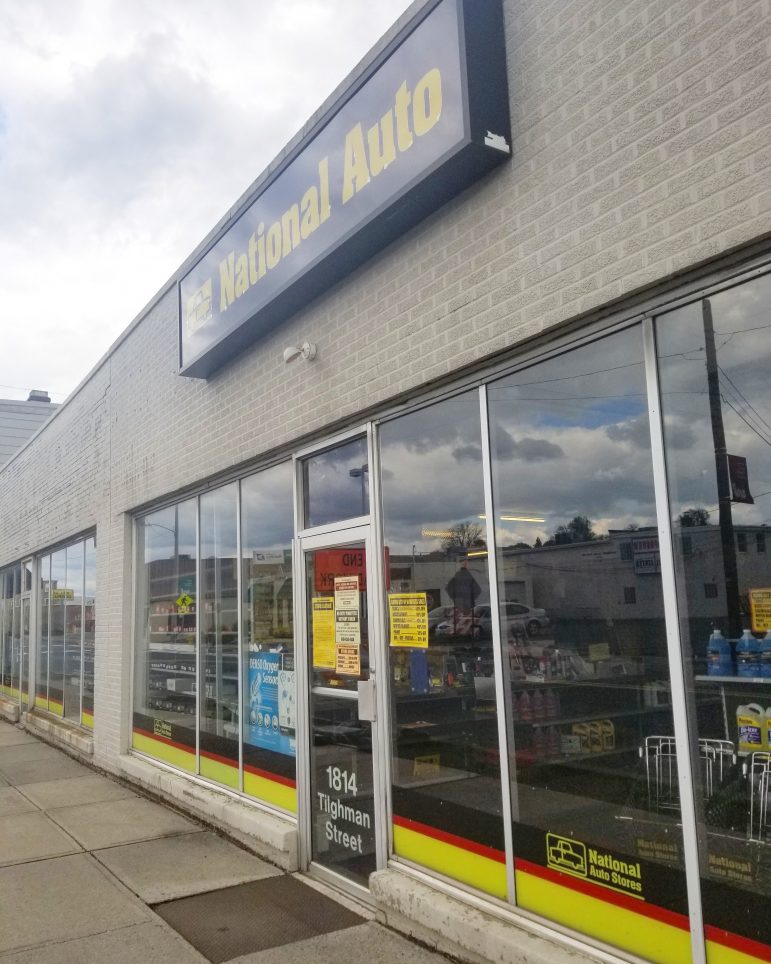 The National Auto Store on Tilghman Street in Allentown is also closing permanently.

“Sadly, Friday, April 30th will be our last day of business,” the signs read. “It is impossible to summarize adequately the things that have led us to this point. Looking back on over 50 years in this business we have seen many companies leave the marketplace and seen others fill the void, allowing the industry and commerce to evolve. This is the way of business and of life itself.”

The signs didn’t highlight any other reasons for the stores’ closing, and a company representative said Monday that he had “no comment for the record.”

“Please accept our apologies for any inconvenience this may have caused,” the signs state. “Finally, we would like to extend our deepest gratitude and appreciation to you and sincerely thank you for your patronage over the years. It has been a pleasure to serve you and your automotive needs and we wish you and your families good health, happiness and every success in the years to come.”

As of Sunday, neither the company’s website nor its linked social media accounts made mention of store closings. 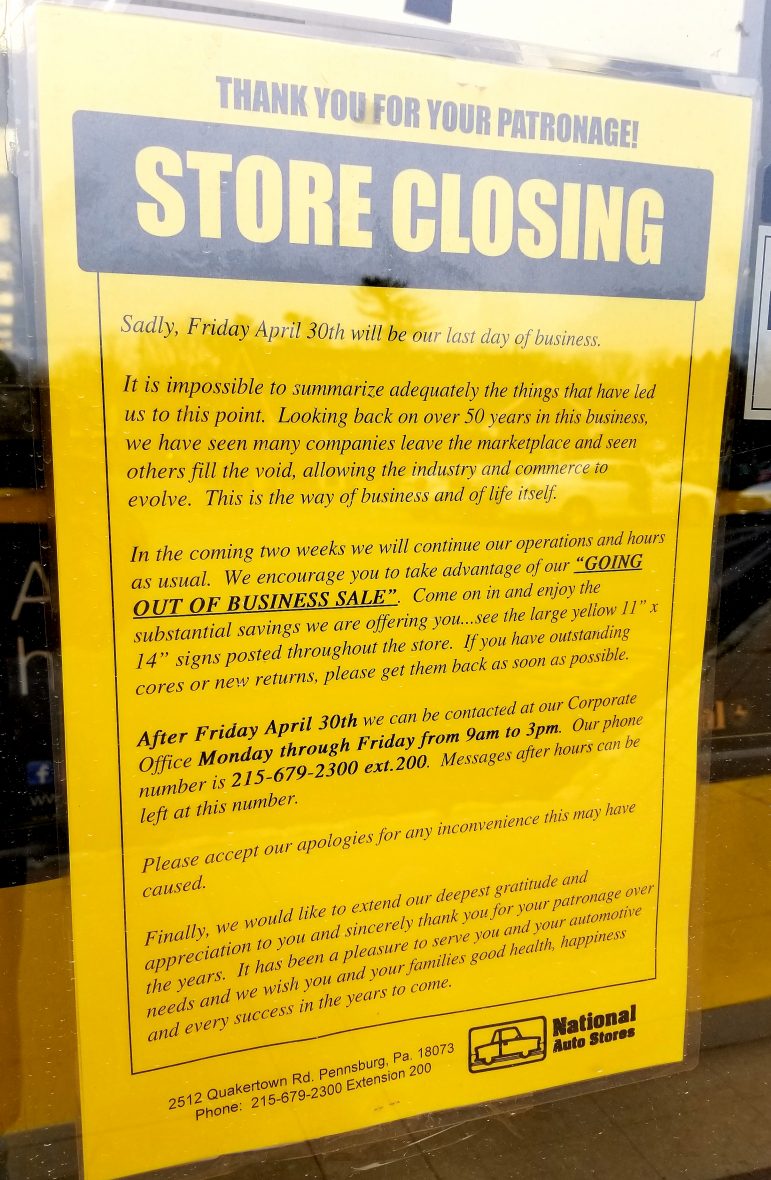 Many U.S. retailers have been challenged by the economic impacts of the coronavirus pandemic over the past year. The pandemic has hit brick-and-mortar businesses particularly hard, in spite of government aid programs created to help sustain them.

The national auto parts chain Pep Boys announced last month that it was closing at least some of its retail locations, though not its service and tire garages. The Philadelphia Inquirer reported that some of its retail outlets may reopen under a different brand.

As part of the impending closures, National Auto Stores is selling off inventory and advertising a “Going Out of Business” sale at both the Hellertown and Allentown stores.

During the sale, tools and accessories are 50 percent off, chemicals and wiper blades are 40 percent off, paint is 35 percent off and motor oil/filters are 30 percent off, according to the signs, which specify that the discounts do not apply to sale or clearance items and that all sales are final. Only cash and credit card payments are now being accepted. 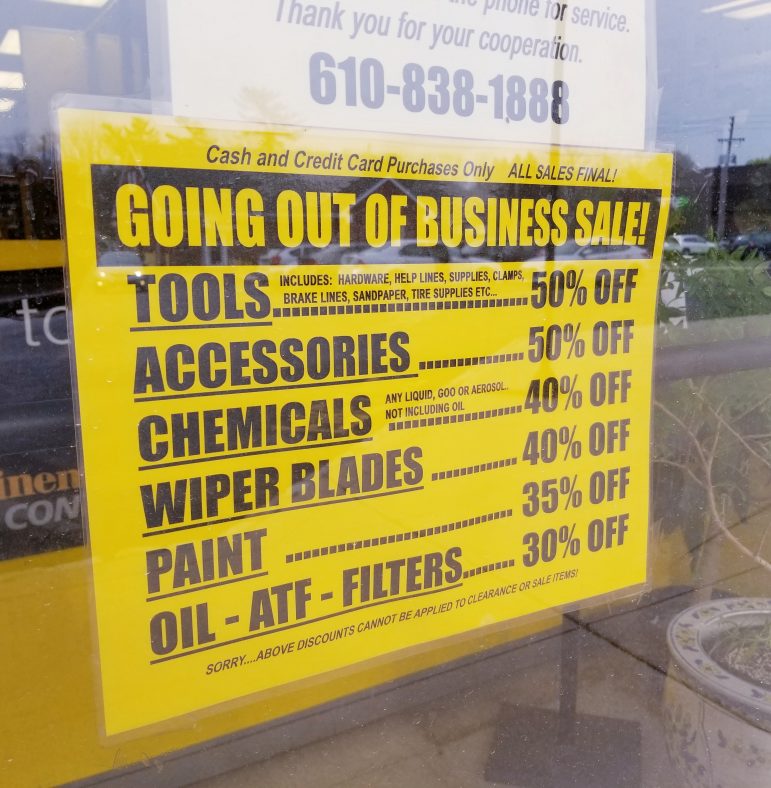 In addition to the store at 7 Main Street, Hellertown, and the Allentown location, National Auto has stores in Bangor, Blakeslee, East Stroudsburg, Easton, Kutztown, Northampton, Pennsburg, Shillington and Warminster, according to its website.

The company is headquartered in Pennsburg, Montgomery County, and has been serving eastern Pennsylvania since 1969, according to its website.

The Hellertown National Auto Store is open from 8 a.m. to 6 p.m., Monday through Friday. For other locations’ hours, visit NationalAutoStores.com.

As of Sunday, at least five other retail storefronts in the Shoppes at Hellertown were vacant. They included units that housed the former Spring Hill Cleaners, a frozen yogurt shop which closed in 2016, a cell phone store, a martial arts studio and a bank.

Starbucks has announced that is opening a store with a drive-thru in the former Bank of America, which is located near the corner of Main Street and Polk Valley Road, within the shopping center parking lot.

Another storefront in the Shoppes at Hellertown is home to Tower Health, which has been temporarily closed since last year.