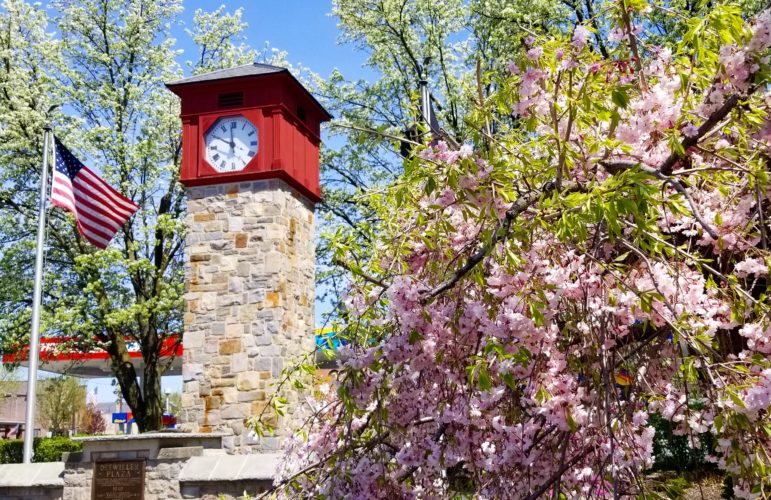 Built of stone, the plaza clock tower is a symbol of strength for the people of Hellertown, as well as visitors to the borough. Standing tall above the fountain, the sight of it has become a reminder of “home” for anyone who hails from Saucon Valley.

Editor’s Note: This story was first published in May 2018. It is being republished in tribute to Joseph C. “Joe” Delfoe, whose vision and determination helped turn a plan for beautifying Hellertown’s Detwiller Plaza into reality in 1987. Joe died Feb. 17 at the age of 89, and the clock tower is just one part of the legacy he leaves behind. Tributes to him are being shared by the local organizations he assisted and the friends he made during 60-plus years as a borough resident and a devoted volunteer. The funeral procession for Joe Delfoe will pause next to the plaza around 10:45 a.m. on Tuesday, Feb. 22.

The clock tower in Hellertown’s Detwiller Plaza has become a beloved borough symbol that appears on everything from Christmas cards to the patches worn by Hellertown police officers. But do you know anything about how it came to be there?

The clock tower is the plaza’s proverbial keystone, and was the brainchild of Joe and Eleanor Delfoe, who in 1987 built it with other local volunteers. The following year it was dedicated “to all whose contributions and labor have made a dream become a reality.” 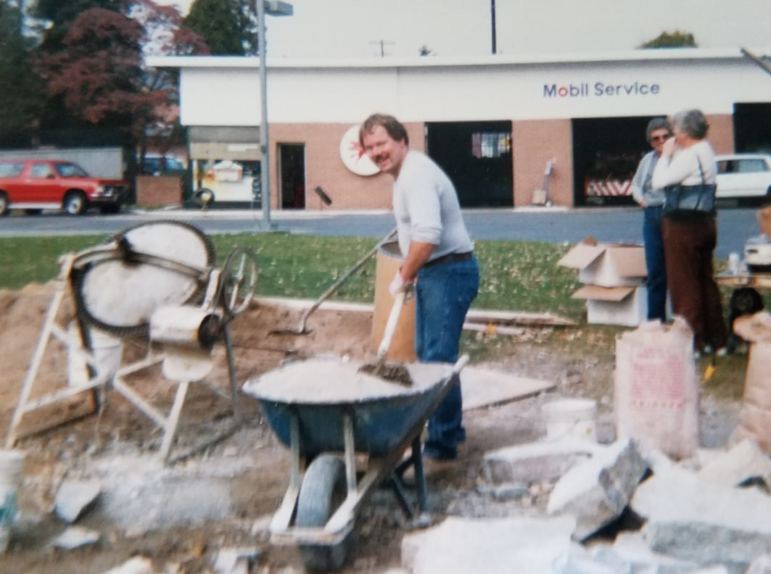 Bill Henick mixes concrete in a wheelbarrow. Behind him is the plaza gas station, which in the late 1980s was a Mobil station. (Photo courtesy of Eric King) 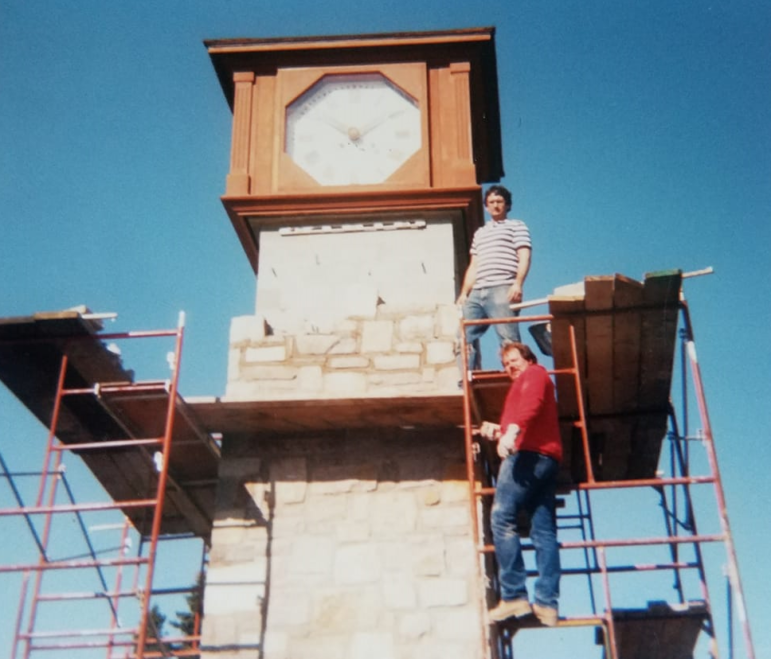 Jeff King (above) and Bill Henick (below) stand on scaffolding during the construction of the plaza clock tower in 1987. (Photo courtesy of Eric King)

The fountain at the center of the plaza is quite a bit older than the clock tower and dates from the early 1940s, when the small park at Easton Road and Main Street was created. 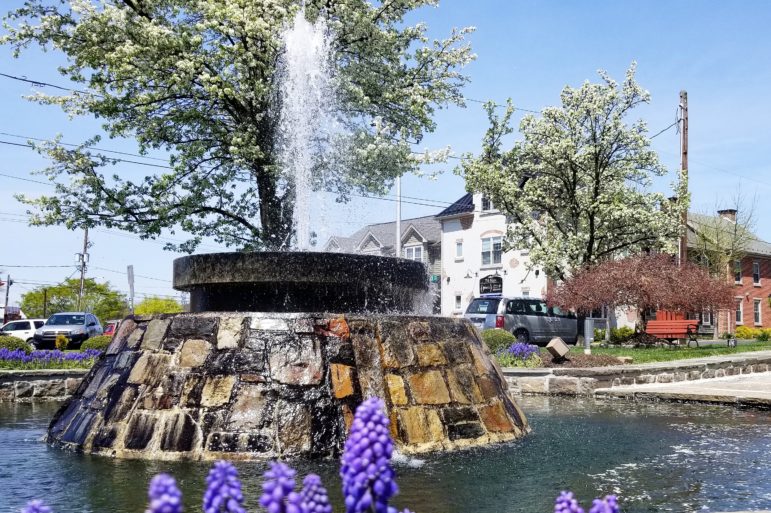 The beloved fountain in Detwiller Plaza was built in the early 1940s and incorporates lighting from the General Electric display at the 1939 World’s Fair in New York City.

The following history of the plaza’s development and the fountain’s construction appears in the book, “Hellertown, Pa., Centennial, 1872-1972.”

Upon the death of Dr. William F. Detwiller (in 1907), the site of the Plaza was bequeathed to another nephew, Dr. Albert Knecht Detwiller of Bell Harbor, Long Island. He in turn donated the area to the Borough for public use and as a memorial to his distinguished grandfather.

Prior to the construction of the Plaza, the site was occupied by two old landmarks–a stone building facing Main Street which at one time served as a post office and an adobe building which for nearly a half century was the Weisel harness and saddle shop. The latter was well frequented by the town’s menfolk in the same manner as the country store with its cracker barrel. 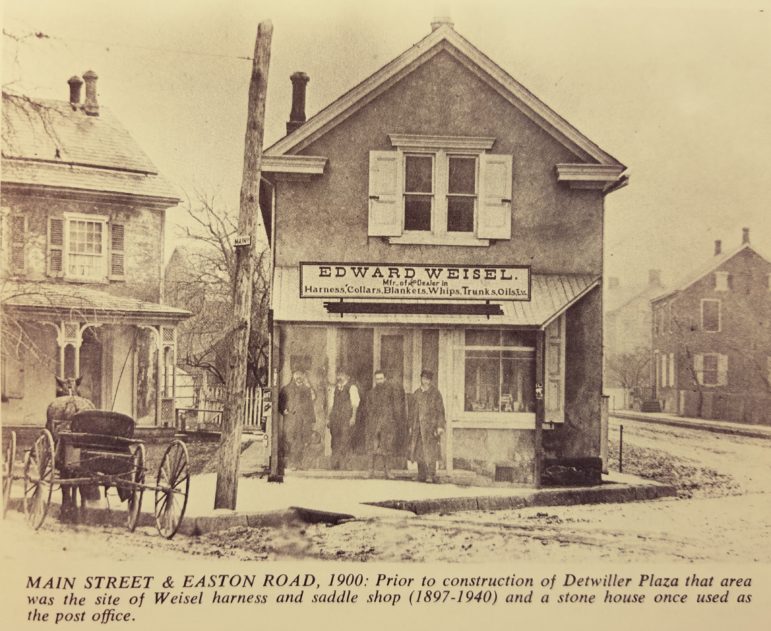 Before the fountain and long before the clock tower was built, a stone house and Edward Weisel’s harness shop (pictured above, c. 1900) stood on the site of what today is Detwiller Plaza in Hellertown.

The fountain, pool and base of the flag pole are constructed with stone from the razed buildings and from flagstones which formerly served as sidewalks on Main Street and Easton Road.

The water in the plaza is circulated by a turbine from a spring which was located in the cellar of the old stone house. The submerged lighting fixtures were used in the General Electric Company’s display at the 1939 World’s Fair at New York.

Today this lovely spot enhances the beauty of the Borough during the entire year. Winter brings the aesthetic ice formation on the fountain artistically accented by the colored lights, and in summer the beauty of the lighting and the sounds of the flowing water attracts young and old.

Detwiller Plaza, with its illuminated fountain and stones of the past should continue to light the way for progress by future generations and keep us mindful and thankful of the work done by those early Hellertonians who lived and worked here before us. 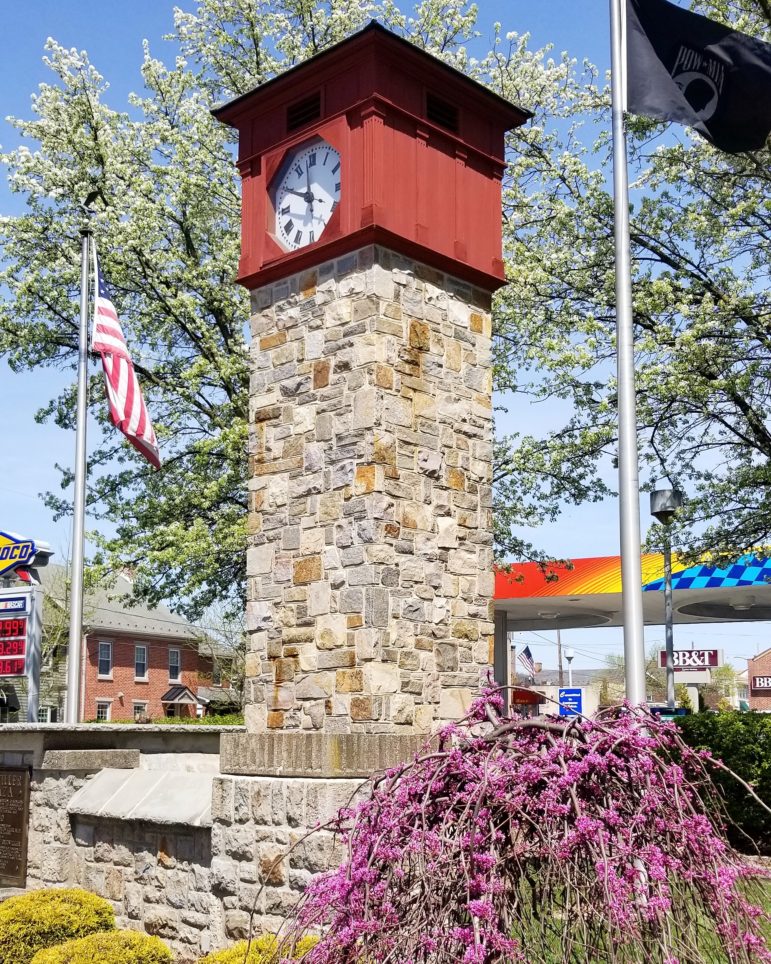 Certainly, the construction of the clock tower 15 years after the borough marked its centennial was undertaken as part of a long community tradition of volunteerism.

In this writer’s opinion, residents of and visitors to Hellertown–now and in the future–will always owe a debt of gratitude to the Delfoes for their vision, and to everyone who donated time and money toward the construction of what is truly a Hellertown gem.

The next time you see it or hear the echoing of its chimes, take a moment to think about what Hellertown would be like without the plaza clock tower and the generosity of the late Joe Delfoe.

>>VALUE OUR REPORTING? HELP SUPPORT IT BY BECOMING A SAUCON SOURCE MEMBER TODAY. 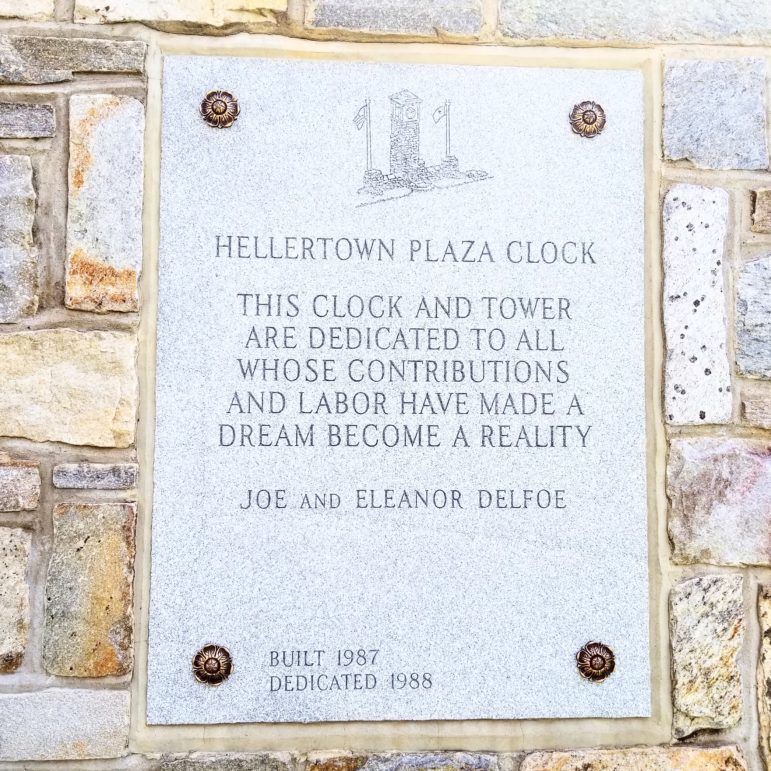 This plaque is located on the west side of the plaza clock tower. 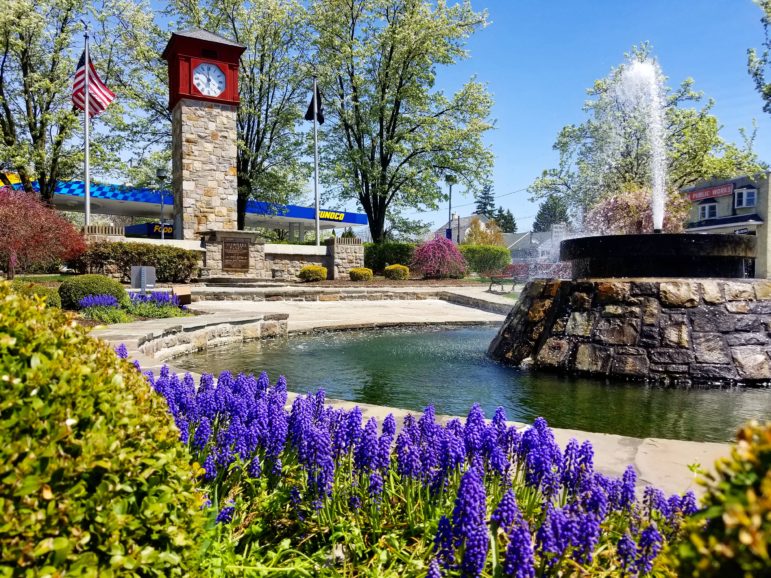 The plaza is always a sight for sore eyes but is particuarly enchanting in the spring, when flowers bloom around the fountain. 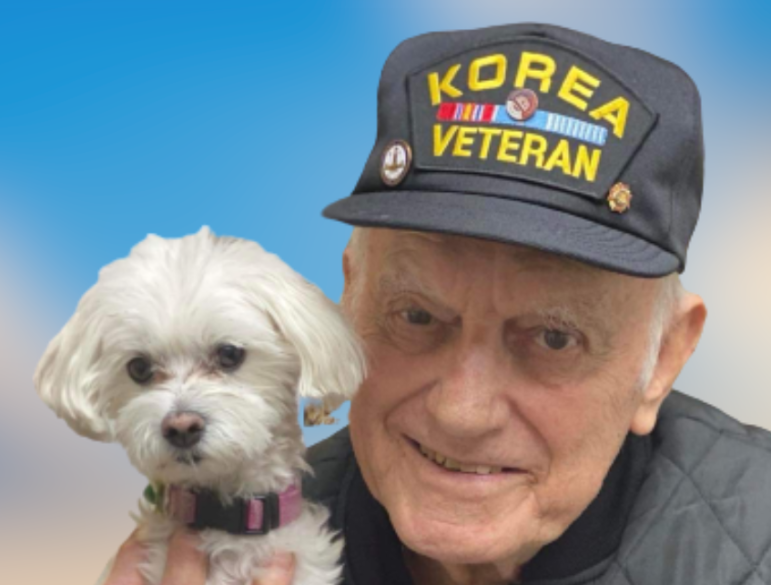 Joseph C. “Joe” Delfoe (1932-2022), with his family and other volunteers, formed the Plaza Clock Tower Association and turned a dream for beautifying Hellertown’s Detwiller Plaza into reality in the late 1980s. Today, the striking clock tower that was built as part of that effort is the most widely recognized symbol of the borough of Hellertown.