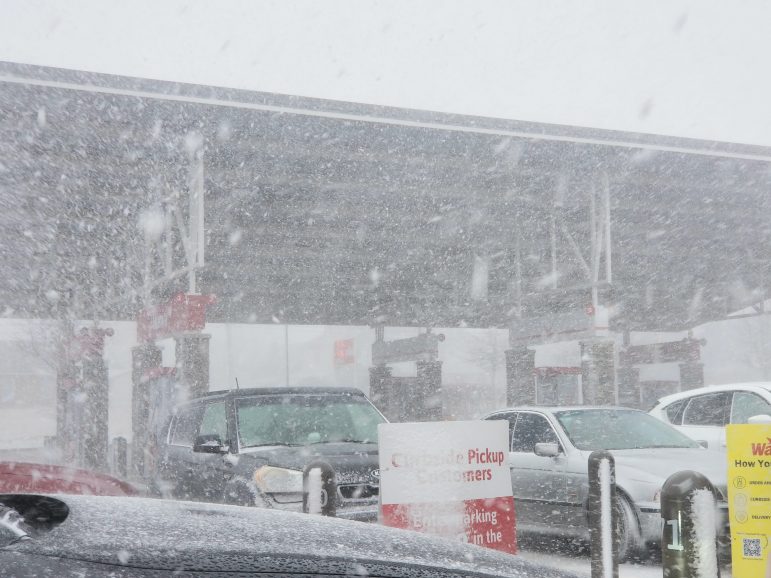 Intense snow squalls aren’t particularly common in the Lehigh Valley, especially in February, when atmospheric conditions don’t normally favor their formation. So a snow squall warning that was issued by the National Weather Service around 1 p.m. Saturday was easily ignored by area residents in a hurry to complete their weekend errands.

What couldn’t be ignored, however, were the near whiteout conditions that soon developed as a strong squall line with the appearance on weather radar of summer thunderstorms moved rapidly into and across Lehigh and Northampton counties. 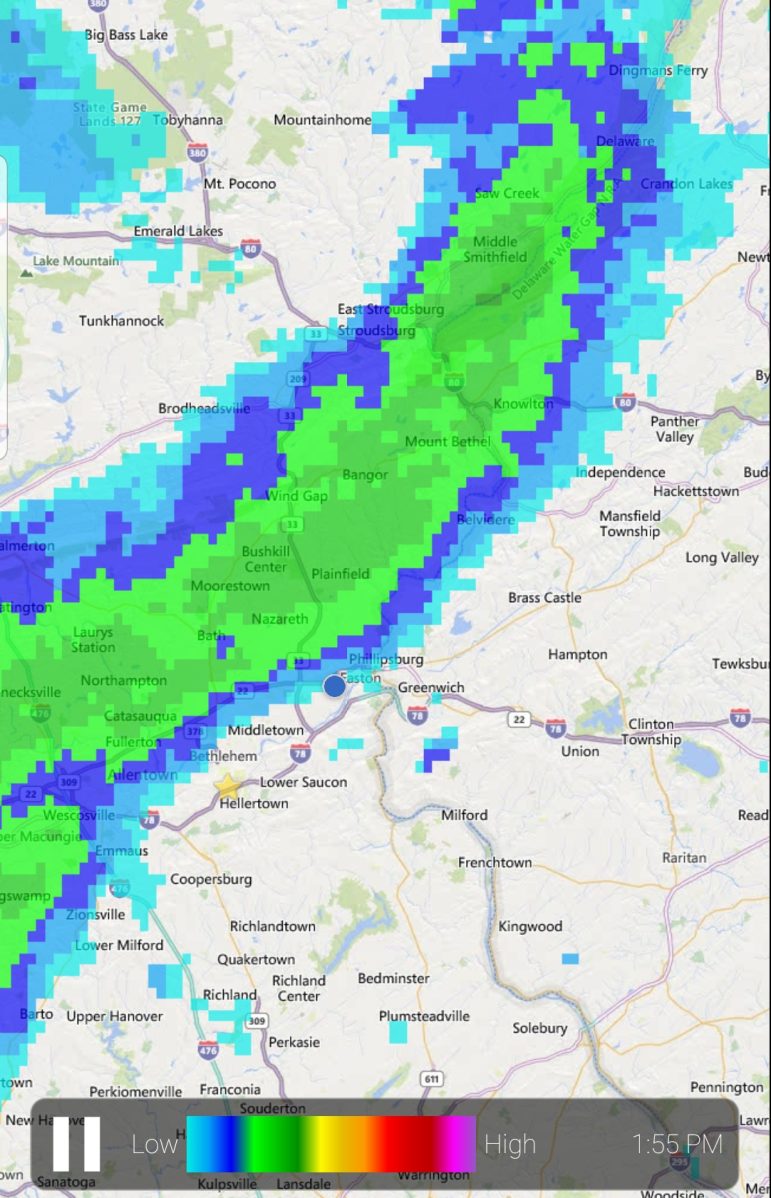 The approaching snow squall line bore the appearance of a line of summer thunderstorms on weather radar. The National Weather Service issued a snow squall warning for the Lehigh Valley as the line of precipitation approached from the west.

When the squall arrived, it was accompanied by winds that blew the falling snow horizontally, and made it difficult to remain upright if one was out walking at the time.

Some motorists aseemed to be caught off guard by the burst of snow, which left cars and street signs shellacked and turned what had been a barren landscape into a winter wonderland.

Others sought shelter in stores such as the Wawa on 25th Street in Palmer Township, where only cash purchases were possible after the storm knocked out satellite communication, crashing its POS system. 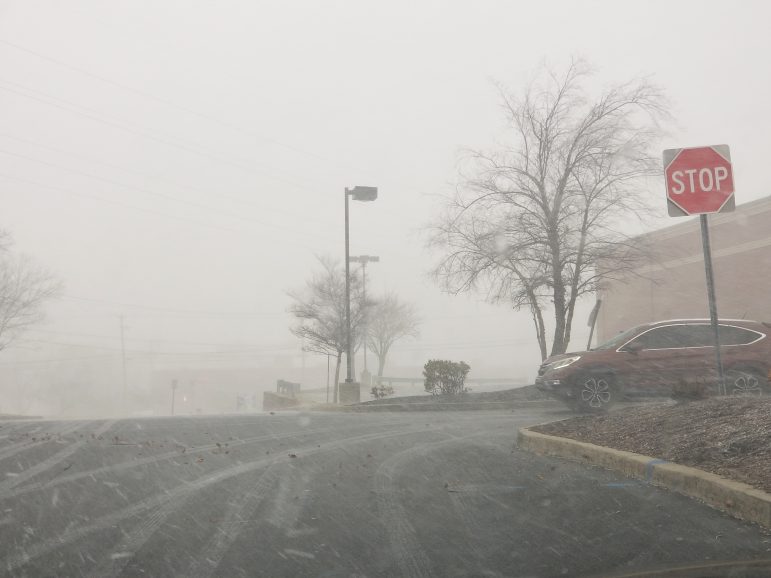 A driveway entrance to the Wawa store at 25th Street and William Penn Highway in Palmer Township, near Easton, became difficult to see as visibility rapidly deteriorated during Saturday afternoon’s intense snow squall.

The snow seemed all the more unusual because of unusually warm temperatures the area just enjoyed. After bottoming out at 1 degree on Tuesday, the mercury soared into the 60s Thursday and Friday, before crashing back to below normal levels on Saturday.

Strong winds that accompanied a frontal passage early Friday knocked out power to thousands of Lehigh Valley residents, some of whom didn’t get it back until last night.

The unusual rollercoaster thermometer ride is forecast to continue at least for the near term, with lows in the teens expected on Sunday, but highs in the 50s and 60s again on Monday, Tuesday and Wednesday.

By Thursday and Friday, however, there will be another chance of snow, according to the latest National Weather Service forecast for the Allentown area. 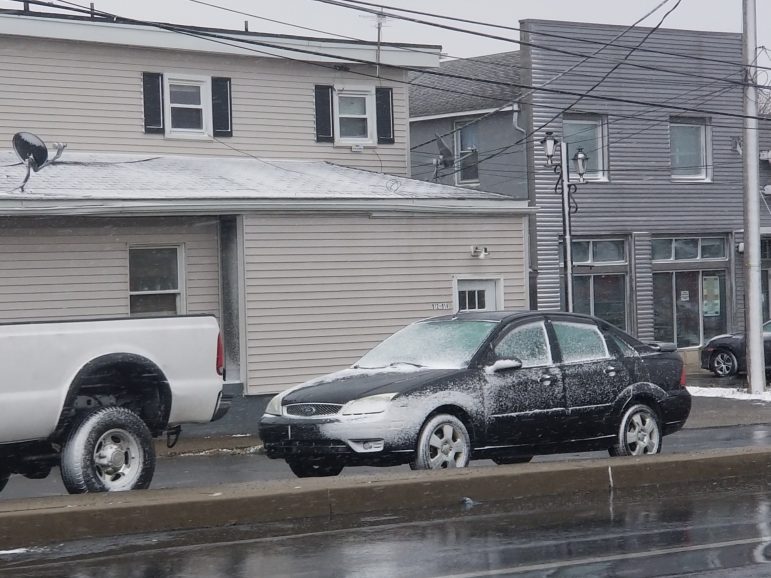 Vehicles were shellacked by the heavy snow that was blown horizontally by wind gusts which accompanied the squall. 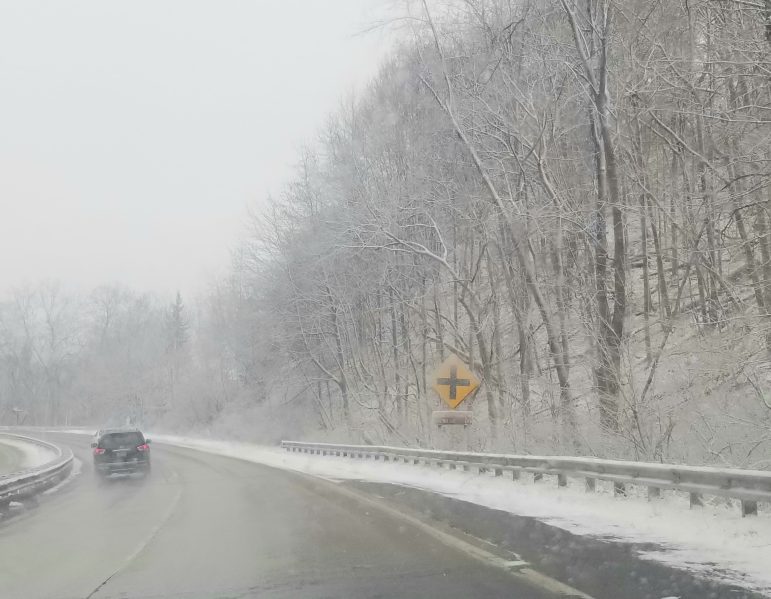 What half an hour had been a barren landscape was left coated in snow. With a duration similar to that of a thunderstorm, Saturday’s unusual snow squall only lasted about 20 minutes. 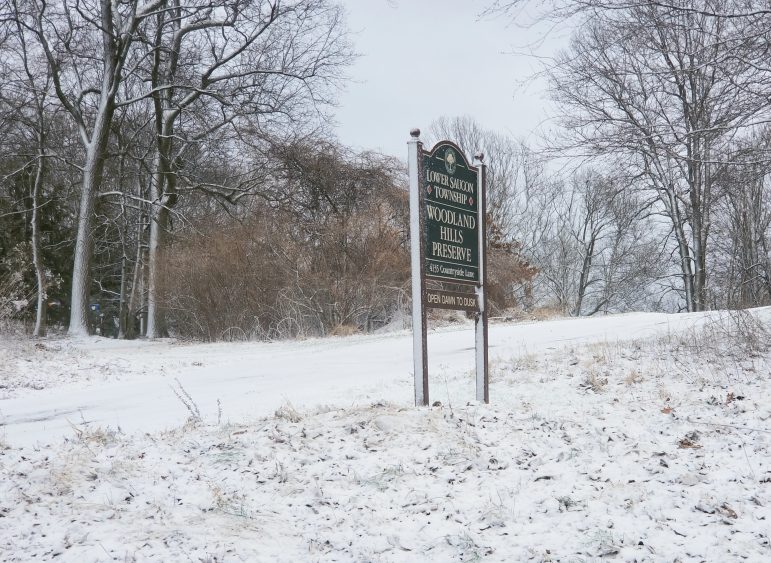 More than half an inch of snow–enough to completely cover the ground in many places–fell during Saturday’s unusual squall. Pictured above is the entrance to Woodland Hills Preserve on Countryside Lane in Lower Saucon Township.