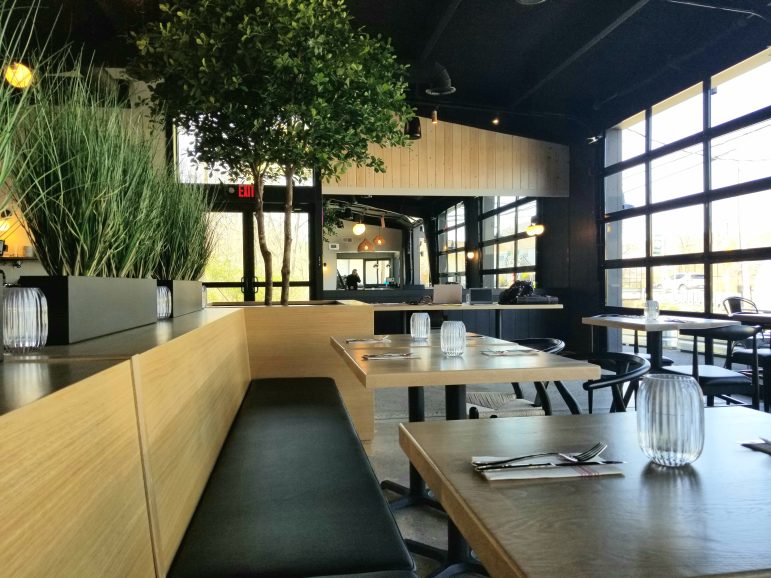 PA House will open by the end of April, according to owner Franco DiCarlo. The new Hellertown restaurant will serve an Italian-influenced menu in an indoor-outdoor setting, which he hopes will become a gathering place for the community.

“When’s that new place opening?” is a question that has frequently been heard around Hellertown for months, as curious residents have eyed the remarkable conversion of a former garage at Front and Water streets to an ambient dining destination overlooking the Silver Creek, the Saucon Rail Trail and beyond.

The “new place” is PA House, and it’s the creation of owner Franco DiCarlo and his family, who have spent years living in both New York City and Saucon Valley. They now spend most of their time in Lower Saucon Township, but it’s from the prior period that the restaurant’s name is derived.

If they were in Pennsylvania they would talk about “the city,” he explained, but when they were in New York they referred to their Saucon Valley home as their “PA house.”

“This has been my full-time project,” he said, adding that his wife still works full-time in the New York fashion industry, where he also spent decades. 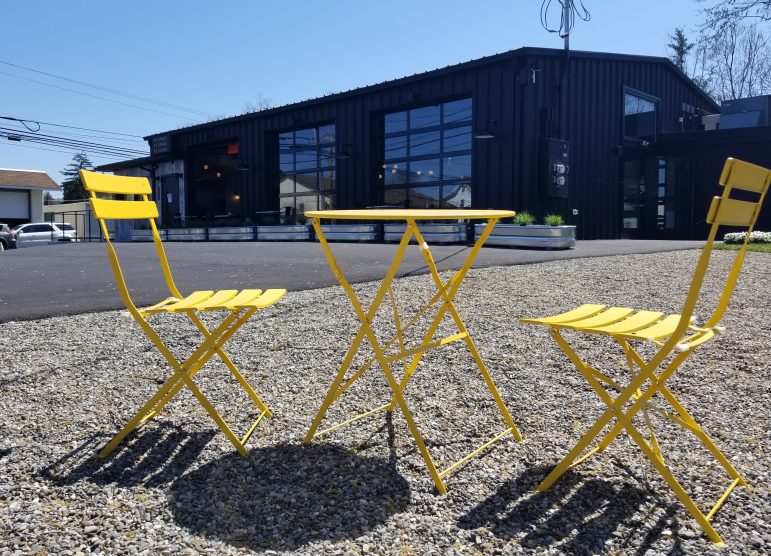 The former garage that is now PA House is located at 662 Front Street–at the corner of Water and Front streets–in the heart of Hellertown borough. In addition to inside seating, there are a variety of outdoor seating options customers will be able to utilize on sunny days, including bistro tables and Adirondack chairs overlooking the adjacent creek and rail trail.

DiCarlo first won approval for his PA House plans nearly two years ago, but his vision has taken time to come to fruition, in part because of pandemic-related supply chain issues.

With an open-concept design and garage doors that can be rolled up to bring the outside in, DiCarlo’s vision for PA House is that of an intimate local gathering place; one in which he hopes patrons will be as comfortable as they are in their own homes and workspaces.

Thanks to technology, in many cases work now takes place wherever the worker is, he noted. Routines may be different, but as a result of more Americans working from home there’s more of a desire to get out and socialize now than perhaps at any time before.

Much of the open, airy design concept for PA House predates the COVID-19 pandemic, and while largely utilitarian, it also draws on urbane influences for its aesthetic.

The former garage ceiling has been painted a matte black and its concrete floor has been polished to help create what DiCarlo called a “durable, honest” ambience. 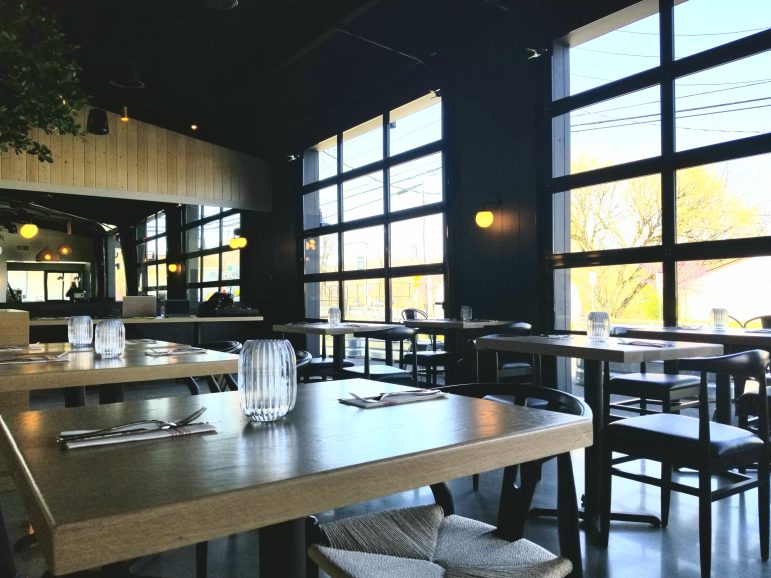 The building that has been transformed according to PA House owner Franco DiCarlo’s vision is still identifiable as a former garage. In creating an “honest, durable” ambience, DiCarlo kept key building features like a concrete floor that has been polished to a dull shine.

Born in Italy, raised in Michigan, and a citizen of the world as a frequent business traveler from New York to Europe during his career in the fashion industry, there is also an eclectic aspect to PA House’s design, which is perhaps most evident in its versatility.

In addition to indoor and al fresco dining–and bar seating–PA House has a corner window for takeout and ice cream purchases. The unique service area will permit trail users–or anyone on the go–to easily purchase a cold treat during the warmer months.

Customers on the go are also the target market for the DiCarlos’ Hello Joe coffee trailer, which will open in the PA House parking lot when the restaurant does later this month.

Staff inside the gleaming Airstream will serve espresso, cappuccino, lattes, cold brew on tap, frozen fruit smoothies and baked goods to passers-by from 7 a.m. to 4 p.m., seven days a week, from early April to early December. 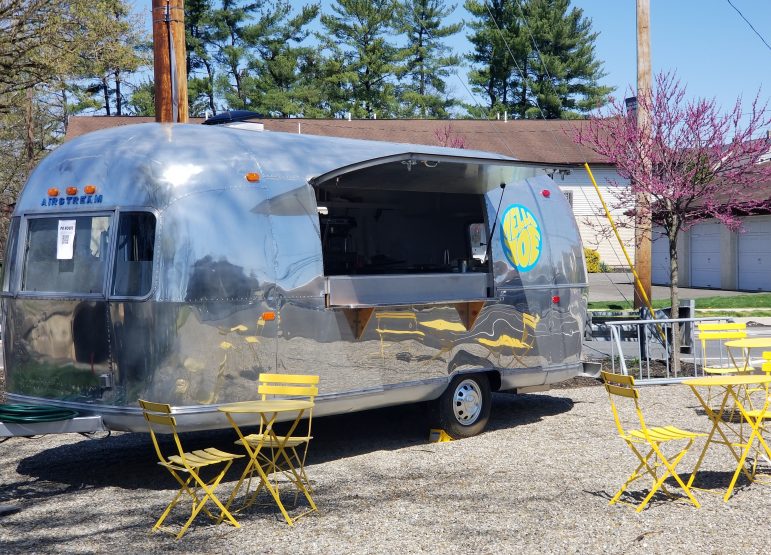 The Hello Joe coffee bar is housed in an Airstream trailer and will be open seven days a week beginning later this month (through Dec. 1). Owner Franco DiCarlo said his wife developed the concept for the coffee bar trailer, which will remain parked outside PA House. Staff inside it will prepare cappuccinos, espressos, smoothies and other drinks for passers-by, including walkers, joggers and bicyclists coming off or entering the Saucon Rail Trail at Water Street.

PA House will be open from around 11 a.m. to 9 or 11 p.m., depending on the day of the week. It will be closed Mondays and Tuesdays, partly to maintain quality standards.

“We just want to ensure that what we do we execute well,” said DiCarlo, who is no stranger to the local food scene. Previously, he owned and operated the ice cream shop Maggie Moo’s, which was located in the Promenade Shops at Saucon Valley.

The PA House menu is still being finalized, but won’t be huge for the same reason, he said.

There will be a focus on small, shareable plates–think roasted cauliflower or charcuterie boards featuring freshly hand-sliced mortadella and prosciutto–that come out of the restaurant’s open kitchen quickly, along with artisanal pizzas baked in a wood-fired oven imported from Italy. In addition to a handful of both red and white pizzas, the restaurant will offer specials in the pizza department, as well as pizzas made with a gluten-free crust. 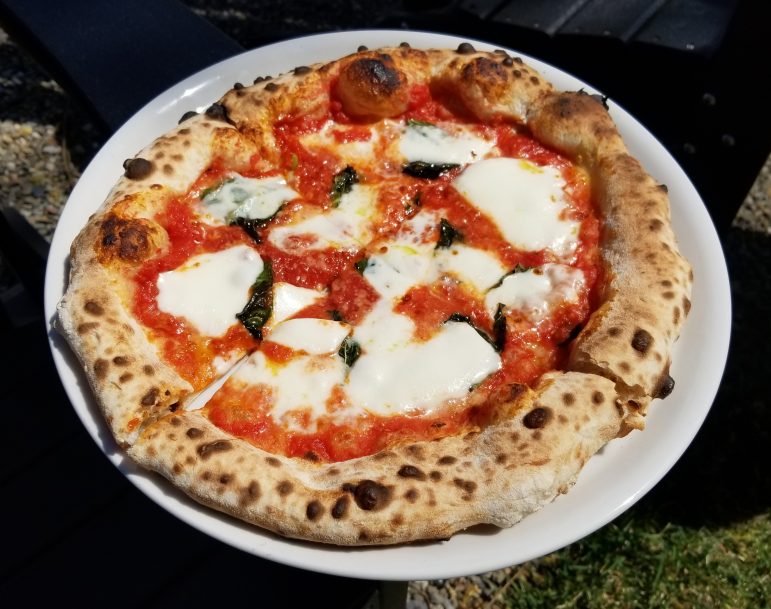 A margherita pizza from PA House is one of a number of traditional and non-traditional varieties of pizza that will be baked in the eatery’s Italian-imported oven.

DiCarlo said PA House will be “gluten-free friendly,” and will also have options for vegan and vegetarian palates.

Hand-cut French fries, garlic bread made using the restaurant’s signature pizza dough, salads and entrees such as Chicken Milanese–along with desserts such as artisan, house-made donuts–will round out the lunch and dinner menu and contributed to an overall dining experience that DiCarlo envisions as “low-key but premium.”

At the PA House bar, patrons will be able to choose from a selection of lighter-style aperitivos in the Italian tradition to add to that experience. Often prepared with Campari, an aperitivo is “the celebration of the beginning of the night,” DiCarlo explained, as opposed to an American-style happy hour which celebrates the end of the work day.

With a lower alcoholic content than traditional cocktails, aperitivos should complement the PA House setting because–as their name suggests–they help stimulate the appetite.

A variety of beers will also be available on draft and PA House will have an extensive wine list, as well as prosecco on tap. In addition to wines by the glass and the bottle, there will be a carafe option that–when poured–will equate to approximately three glasses. 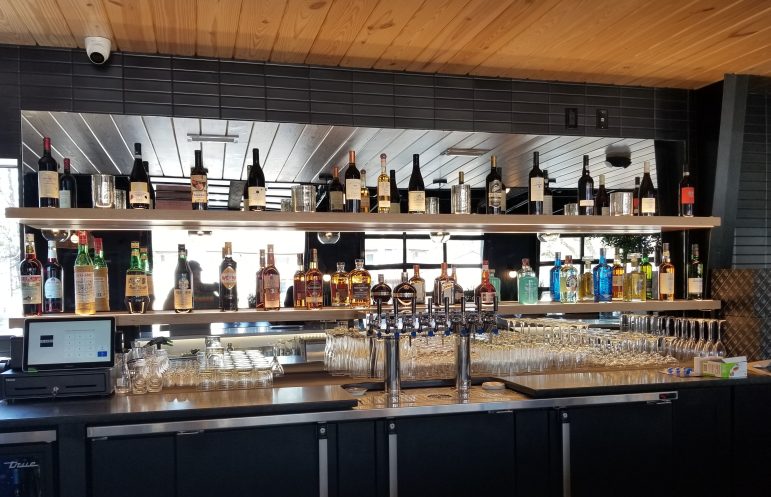 The mirror-backed bar inside PA House is unlike anything else in Hellertown. Owner Franco DiCarlo said the bar menu will also be unique to the area by featuring things like a selection of aperitivos (light before-dinner drinks) and prosecco on tap.

DiCarlo said he has been able to hire an experienced complement of staff for the opening of PA House, which he expects to take place in the April 27-28 timeframe, following a soft opening. Some positions are still being filled, and anyone interested in applying should direct message the PA House Instagram account (@thepahouse) or call 484-851-6662.

A website (ThePAHouse.com) that will feature online ordering is under development, along with a reservation system for parties of six or more. As DiCarlo explained, everyone else will be seated via a first come, first served waiting list that will be rolled out soon.

He said reactions he has received so far have been extremely encouraging; a statement evidenced on Friday by enthusiastic passers-by asking when the restaurant would open. 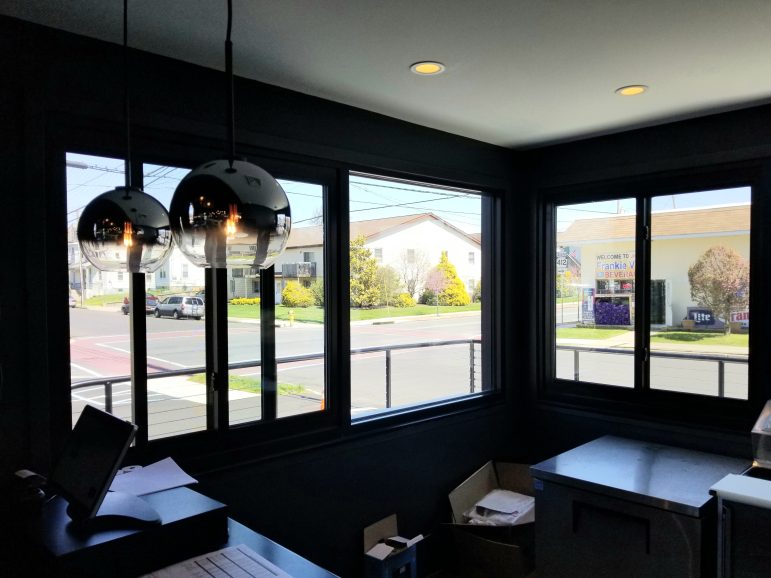 A corner window at PA House will double as a pickup window for takeout food orders and a service window for soft-serve ice cream during the warmer months.

DiCarlo also praised the Borough of Hellertown and its staff for their assistance and support all throughout PA House’s development.

He also said he has used local vendors and tradespeople in bringing his concept to life, as much as possible. One example of that can be seen in the wood tables and other woodwork at PA House, which were made by Maple Street Woodworking of Hellertown.

“Come by car, come by foot, come by bike,” he said, noting that PA House is the latest addition to what he believes is a thriving Lehigh Valley restaurant scene.

DiCarlo said the restaurant will be dog-friendly, with water available for pooches outside.

There is also a bike rack for riders coming off or preparing to enter the nearby trail to use.

“I want us to be this informal gathering place,” DiCarlo added. “Hopefully we will offer something that fills that.” 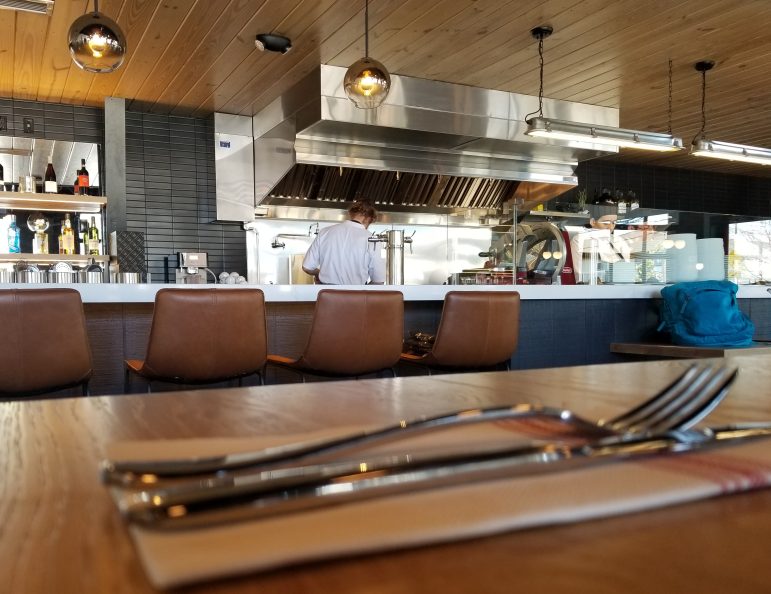 PA House in Hellertown is expected to open by the end of April. Housed in a former garage at Front and Water streets, the eatery will serve an electic Italian menu in a modern atmosphere that takes full advantage of the building’s location next to Silver Creek, overlooking the Saucon Rail Trail and Water Street Park. Menu items will be prepared in an open kitchen.

The lighting inside PA House as viewed from outside its distinctive garage doors has drawn the attention of passing motorists in recent weeks. The restaurant is expected to open to the public by the end of next week. 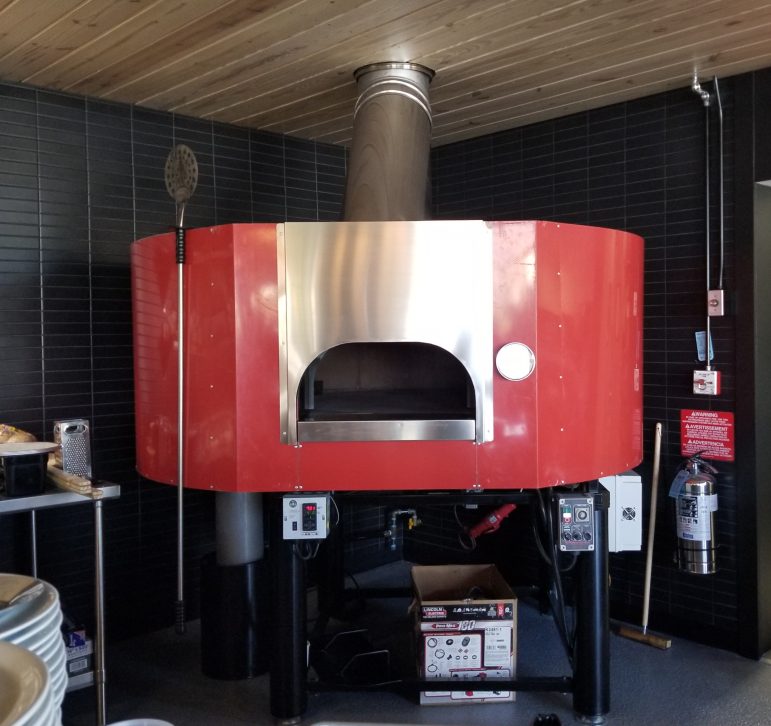 One piece of equipment in PA House that is almost as aesthetically-pleasing as it is functional is the restaurant’s Italian-imported pizza oven. 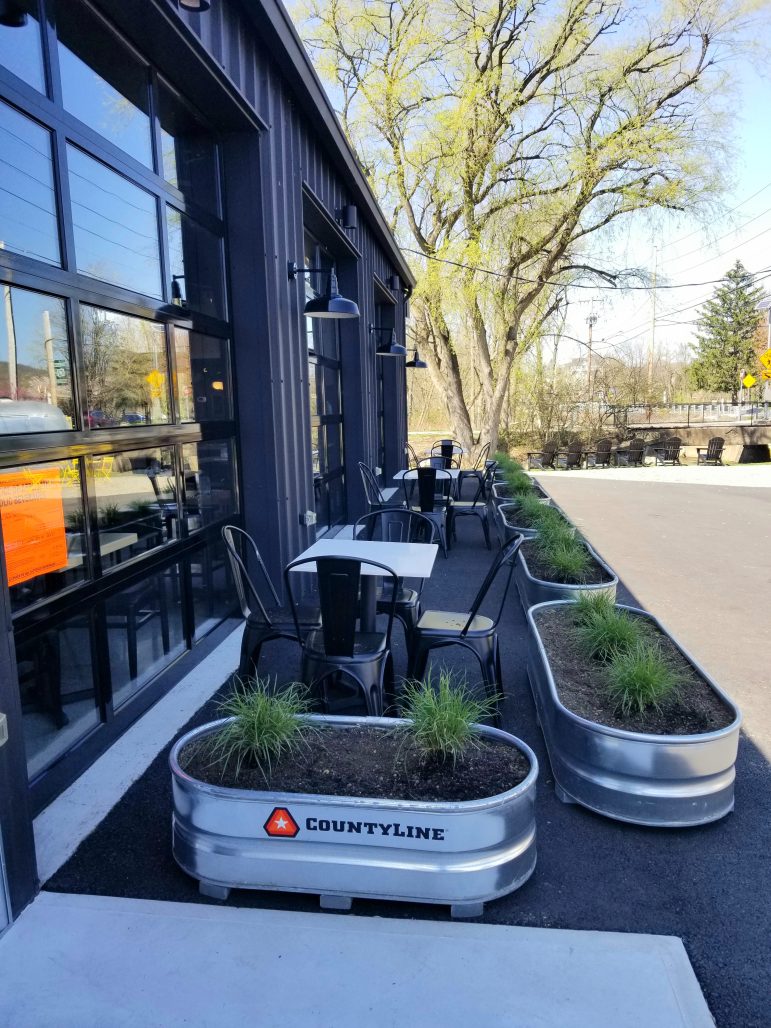 Galvanized metal troughs have been repurposed as planters along the Water Street side of PA House in Hellertown. 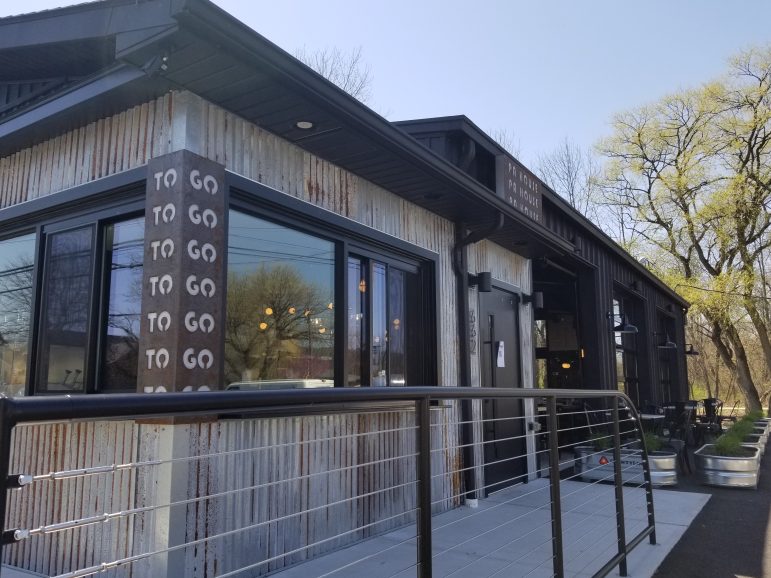 Above. the corner to-go window and main entrance to PA House, which will open in Hellertown at the end of this month. 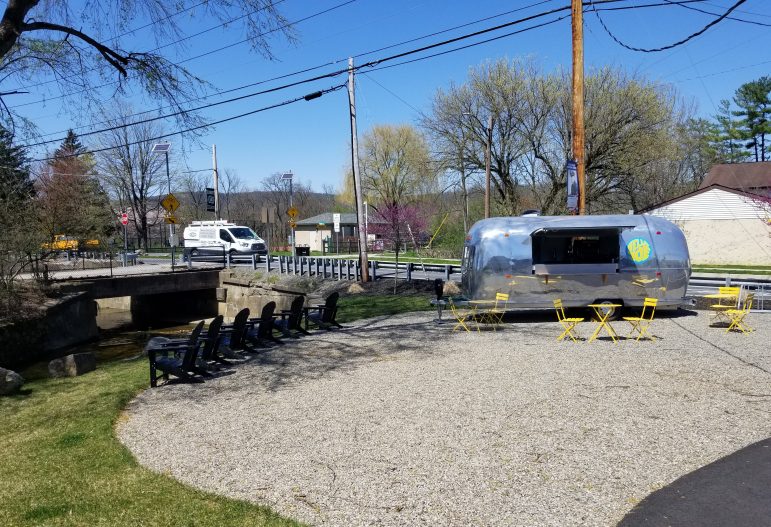 Adirondack chairs overlooking the Silver Creek line the edge of a gravel-lined area between PA House and the Hello Joe coffee bar trailer. Owner Franco DiCarlo has created an outdoor ambience that is already drawing praise from passers-by. 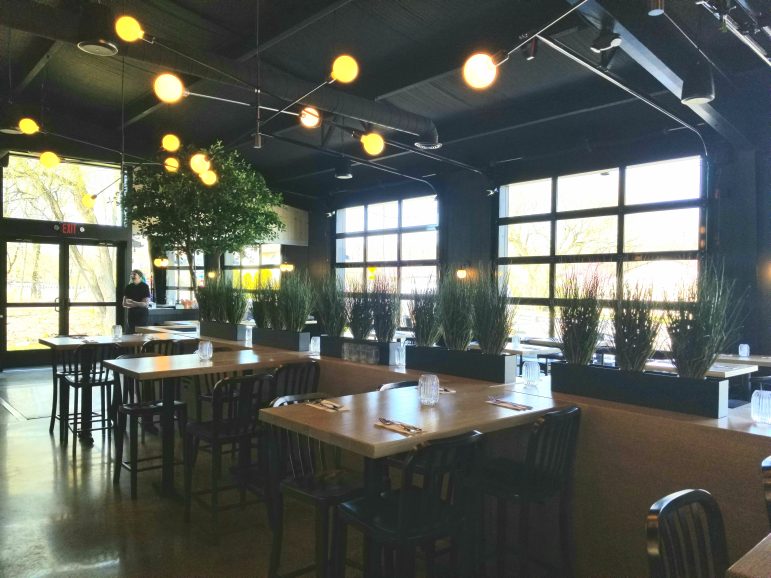 Inside the restaurant, tables that are lower than traditional “high-tops” line a low wall that separates the main dining area from the bar area.