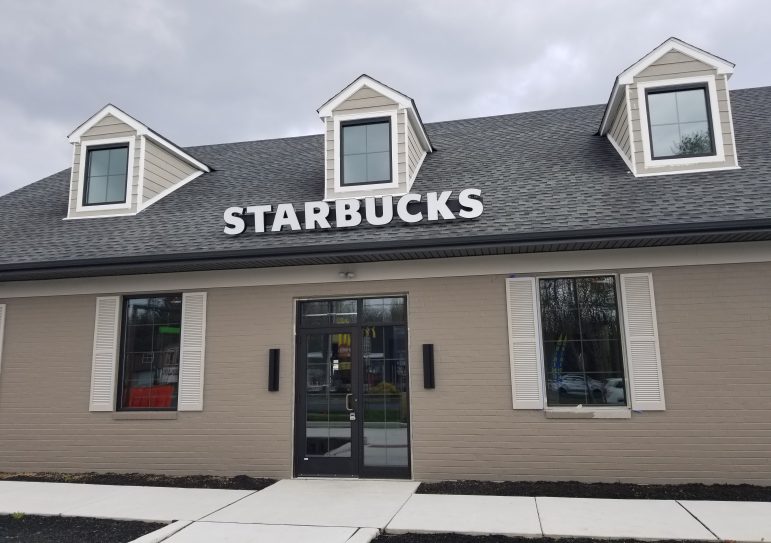 The area’s newest Starbucks will soon open at Main Street and Polk Valley Road in Hellertown. The coffee shop is housed in a former Bank of America branch that has been transformed, both outside and inside, into a very different type of business.

Local residents who remember what a former borough bank branch looked like inside may be surprised to see how contractors have transformed it into the area’s newest–and possibly also its swankiest–Starbucks. And they won’t have to wait much longer to see it.

The manager of the new Starbucks at Main Street (Rt. 412) and Polk Valley Road in Hellertown confirmed Friday that after nearly two years of growing anticipation, it is expected to open to the public on Friday, April 29 at 5:30 a.m.

Sara Wessel and another employee were at the store on Friday afternoon to put some finishing touches on what Wessel said is the nicest Starbucks she has ever seen.

Although it wasn’t possible to tour the store Friday, Wessel said a soft opening for friends and family will be held shortly before it opens to the public.

A Hellertown area native and Palisades High School graduate, Wessel said her career in the food service industry has come full circle, since she once worked at the grocery store that was formerly located in the shopping center that will now be home to Starbucks.

Superfresh operated a store in the Shoppes at Hellertown–then known as the Spring Hill shopping center–from the 1980s until it relocated to the Saucon Valley Square shopping center in Lower Saucon Township in 1999, according to the site AP-Preservation.com.

The east side of the former bank branch is where the drive-thru pickup window will be located. Starbucks store manager Sara Wessel said Hellertown will have the largest drive-thru of any Starbucks, company-wide.

To accommodate what is expected to be a sizeable rush hour crowd, Wessel said the new Starbucks will have the largest drive-thru of any store company-wide, and that the company has plans in place to address any traffic issues that may arise after it opens.

In order to open the store, significant modifications to the surrounding parking lot and nearby intersection were mandated by PennDOT officials. Those modifications are now largely complete, which is why the borough last week issued the store a temporary certificate of occupancy, codes and zoning enforcement officer Kris Russo confirmed.

The store is fully staffed for its upcoming opening, but hiring is continuing and Wessel encouraged anyone who is interested in a position with Starbucks to consider applying.

Wessel said there will be some “surprises” in conjunction with the opening of the new store at 5 Main Street in Hellertown.

The weekend of April 28 promises to be a significant one for Hellertown foodies, as another long-anticipated opening–that of PA House on Front Street–is also planned.

For information about how to advertise your business on Saucon Source and reach thousands of local residents each week, please click here.