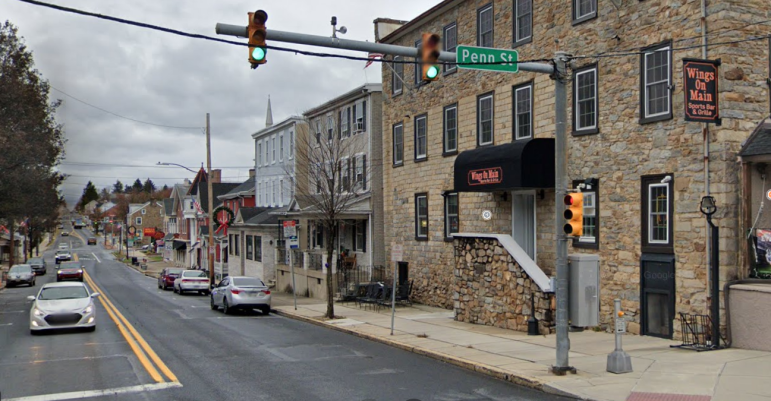 A 15-year-old girl was injured when she was struck by a bus while crossing in the 600 block of Main Street Saturday, borough police have confirmed. Pictured above is a view of the 600 block looking north from the intersection of Main and Penn streets. (Credit: Google Maps Street View)

A 15-year-old girl suffered moderate injuries when she was struck by a Lehigh and Northampton Transportation Authority (LANTA) bus in the 600 block of Main Street in Hellertown Saturday at around 8 p.m., according to a borough police officer who shared an update on the accident with a local mediat outlet Tuesday.

Lehigh Valley Live cited Cpl. John Donato of the Hellertown Police Department in reporting that the girl was not near a crosswalk when she entered the street and was hit by the bus, whose driver Donato said tried to avoid striking her.

The girl was transported to a local hospital for treatment and neither the bus driver nor three passengers who were on it were injured in the accident, the news site reported.

In the 600 block of Main Street, there are crosswalks at two intersections that have traffic lights: Water Street and Penn Street.

With a high daily volume of vehicular traffic, Main Street has been the cite of a number of pedestrian accidents as well as various studies that have led to some safety improvements in recent years.

The most recent pedestrian death occurred in June 2020, when a Hellertown woman was struck by a vehicle in the 1200 block of Main Street.

Kenneth M. Schuebel, of the 2000 block of Leithsville Road, Lower Saucon Township, was later charged with being high on methamphetamine when he allegedly struck 74-year-old Frances Miller as she crossed Main Street in a crosswalk near Linden Avenue.

According to court records, Schuebel’s trial on homicide by vehicle, involuntary manslaughter, DUI-controlled substance and other charges was scheduled to begin earlier this month in the Northampton County Court of Common Pleas in Easton.