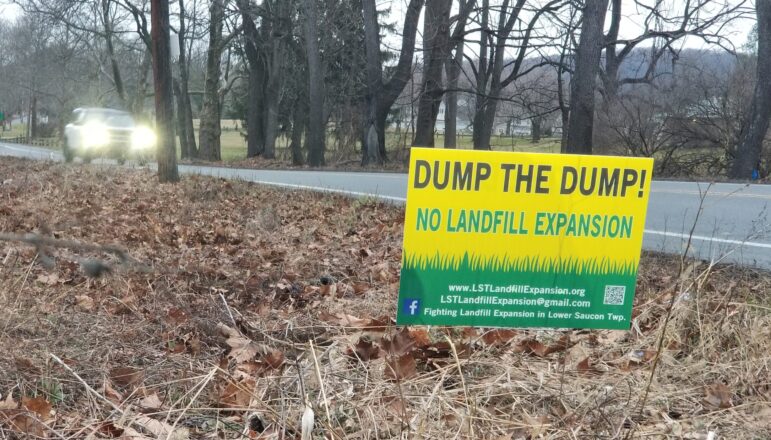 Above, a ‘Dump the Dump’ sign is staked next to Friedensville Road in Lower Saucon Township. Opponents of a proposal to expand the Bethlehem Landfill by approximately 275 acres are fighting a rezoning amendment approved by council last month that would allow for it. The signs are part of a new campaign they hope will increase public interest in the issue.

Opponents of a proposed landfill expansion in Lower Saucon Township are taking their case to the motoring public by planting yard signs asking them to “Dump the Dump” along busy local roads and at intersections.

The green-and-yellow signs are along thoroughfares such as Rt. 378, Mountain Drive North and Friedensville Road, which carry thousands of vehicles in and out of the township daily, most of which never pass near the Applebutter Road trash disposal site.

In smaller text underneath the words “No Landfill Expansion” the signs list the website, email address and Facebook page for a group of residents that became active in the fight against the proposed plan late last year, shortly before Lower Saucon Township Council voted 3-2 to approve a rezoning amendment that paved the way for it to become a reality.

Council’s decision occurred during a five-hour meeting and followed a hearing in which dozens of residents cited quality of life issues, health concerns, the township’s reputation, stress on infrastructure and other reasons they said the rezoning should be nixed.

Lower Saucon Township currently receives more than a million dollars a year in hosting fees from the company that owns Bethlehem Landfill, but some opponents of the expansion have pointed out that it has also been running a surplus nearly equivalent to the amount it receives; an accounting synchronicity they believe debunks a belief others have long held that should the landfill cease to exist, township property taxes will go up.

In fact, the township council approved a reduction in real estate property taxes and the township fire tax last year, which WFMZ reported was due to the elimination of debt.

In addition to yard signs, opponents have also challenged council’s rezoning decision by filing an appeal in the Northampton County Court of Common Pleas.

On Tuesday, some of those same residents plus others filed an appeal with the township’s zoning hearing board challenging the validity of the zoning ordinance that was adoped Dec. 21.

“The adoption of the…Ordinance imposes actual harm to property owners abutting or in close proximity to the 275.7 acres rezoned, affecting health, safety and welfare of Apellants and the Lower Saucon Township community,” the challenge says. It also makes many of the same claims that the suit filed in county court last week does.

Easton attorney Gary Asteak is representing both groups of appellants.

Although it remains unclear whether the landfill could receive all of the necessary approvals for its proposed expansion by November, the issue has already become central to the campaign being mounted by three candidates for Lower Saucon Township Council.

There will be a township council meeting Wednesday, Jan. 18 at 6:30 p.m. at the township building. Among the items on council’s agenda are a discussion about setting a date for a conditional use application by the landfill and a discussion about establishing procedures for that hearing.