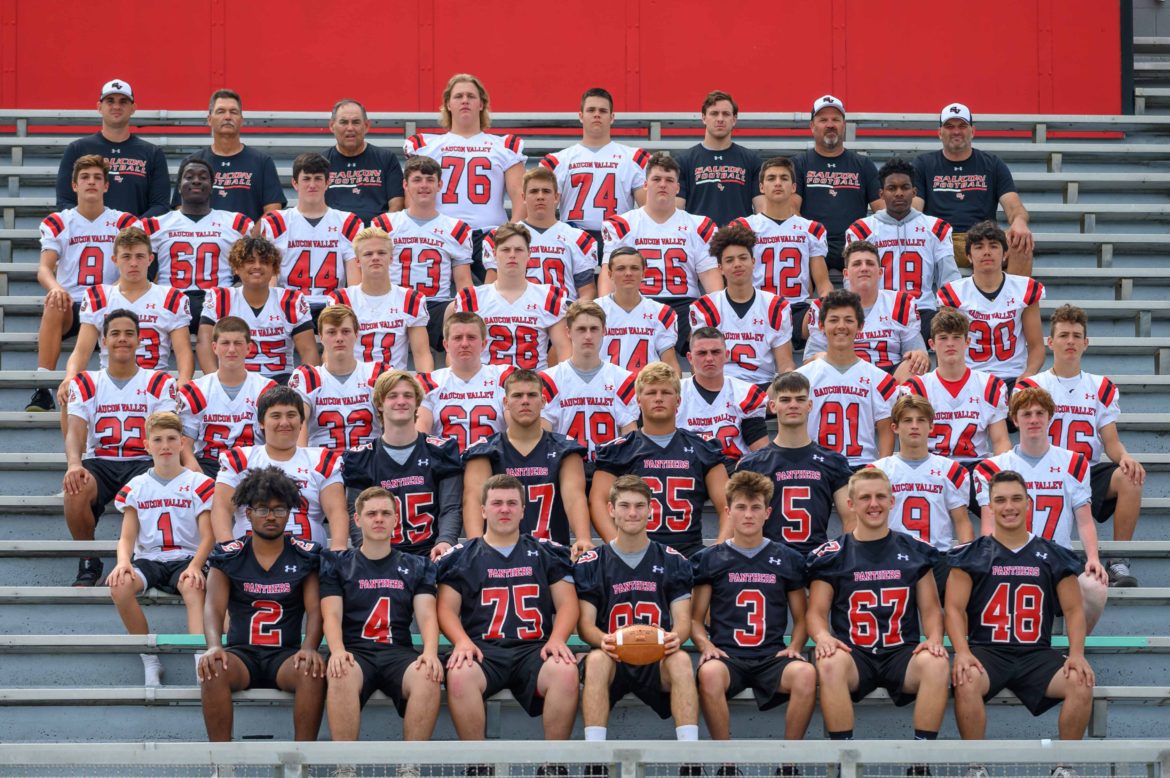 The Saucon Valley Panthers are ready to get the 2019 football season started.

In preparation for next Friday’s 2019 Colonial League opener against the Southern Lehigh Spartans, new head coach Brad Trembler and the 2019 Saucon Valley Panther football team hosted the Fleetwood Tigers in a preseason scrimmage.  It was a very steamy Saturday morning, but a nice crowd was on hand to get their first glimpse at the 2019 Panthers.  With each team getting their first real taste of live action in the 2019 season, it seemed as if both offenses were just a little bit ahead of their respective defenses in their development.

The Panthers started with the football and ran ten offensive plays.  Saucon Valley mixed a little run and pass to advance the ball deep into Tiger territory.  Saucon, however, hit some red-zone woes.  The Panthers were unable to get onto the scoreboard.

About half way through Fleetwood’s ten offensive plays, the Tigers connected on a long pass down to the Panther 6-yardline.  The Saucon Valley defense stiffened, but on play #10, the Tigers pounded the middle and were just able to cross the goalline with a little extra effort. 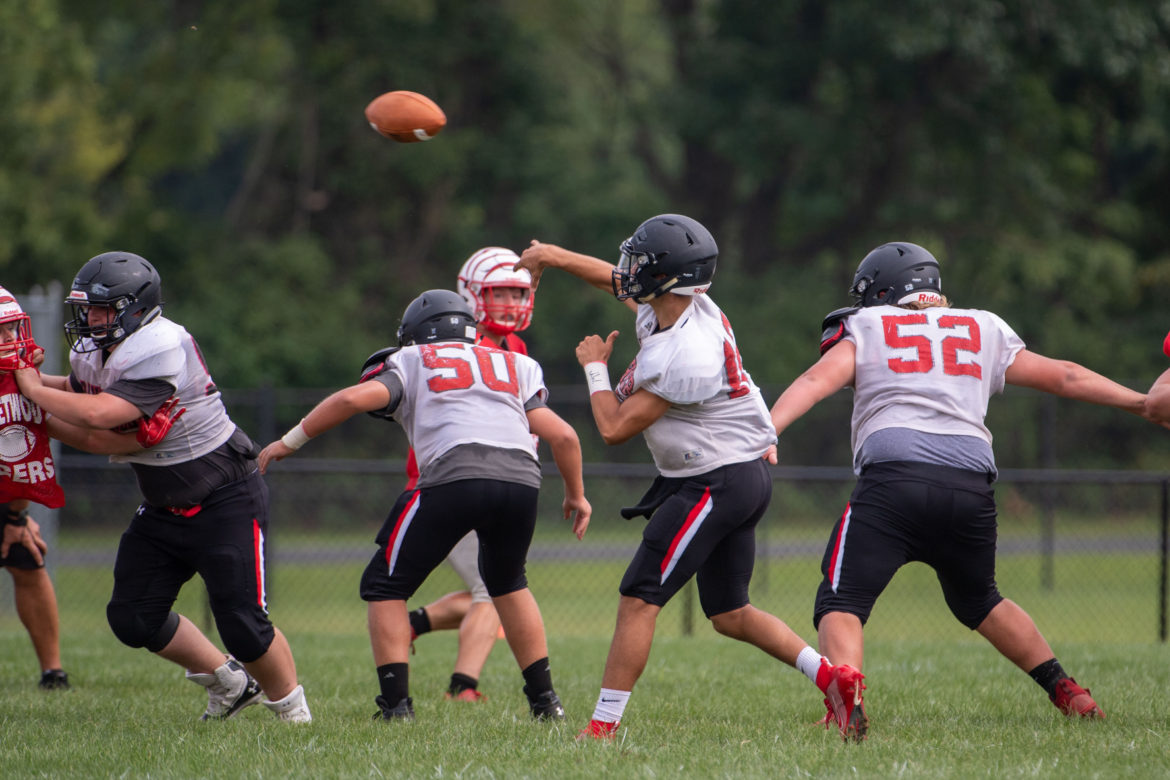 The teams then played a regulation, twelve-minute quarter.  Starting from their own 20-yardline, Saucon Valley advanced for a touchdown in only seven plays.  The drive was highlighted by a couple of passes from Dante Mahaffey to Ty Csencsits that were good for a total of 44 yards.  Running back, Damian Garcia chipped in with his highlight run off right tackle that popped for an 18-yard gain.  Garcia, Csencsits and Mahaffey are all sophomores.  Senior running back, Ramel Moore, capped the drive with a 2-yard touchdown run up the gut.

Fleetwood came right back for a TD.  On the Tigers’ seventh play, they were able to convert a 4th & 7 from the Panther 30-yardline to keep the drive alive. Then, two plays later, the Fleetwood quarterback rolled to his right and rifled a touchdown pass into the endzone for the score.

Saucon Valley got the ball back with just over four minutes remaining on the clock.  The Panther offense, once again, manufactured a scoring drive that resulted in another touchdown.  This time, Saucon went 80 yards in eight plays.  Freshman running back Josh Torres showed a little wiggle when he ran for a 16-yard gain off tackle on a 3rd & 1.  Two plays later Mahaffey found sophomore wide receiver Anthony Orlemann open downfield for a 35-yard gain.  Then, after a couple of power runs by Ramel ‘Rah-Rah’ Moore, Mahaffey scrambled to his left and patiently bought a little time while sophomore Eternal Aris worked to shake free from his defender.  Mahaffey connected with Aris for a 12-yard touchdown pass with ten seconds remaining in the scrimmage. 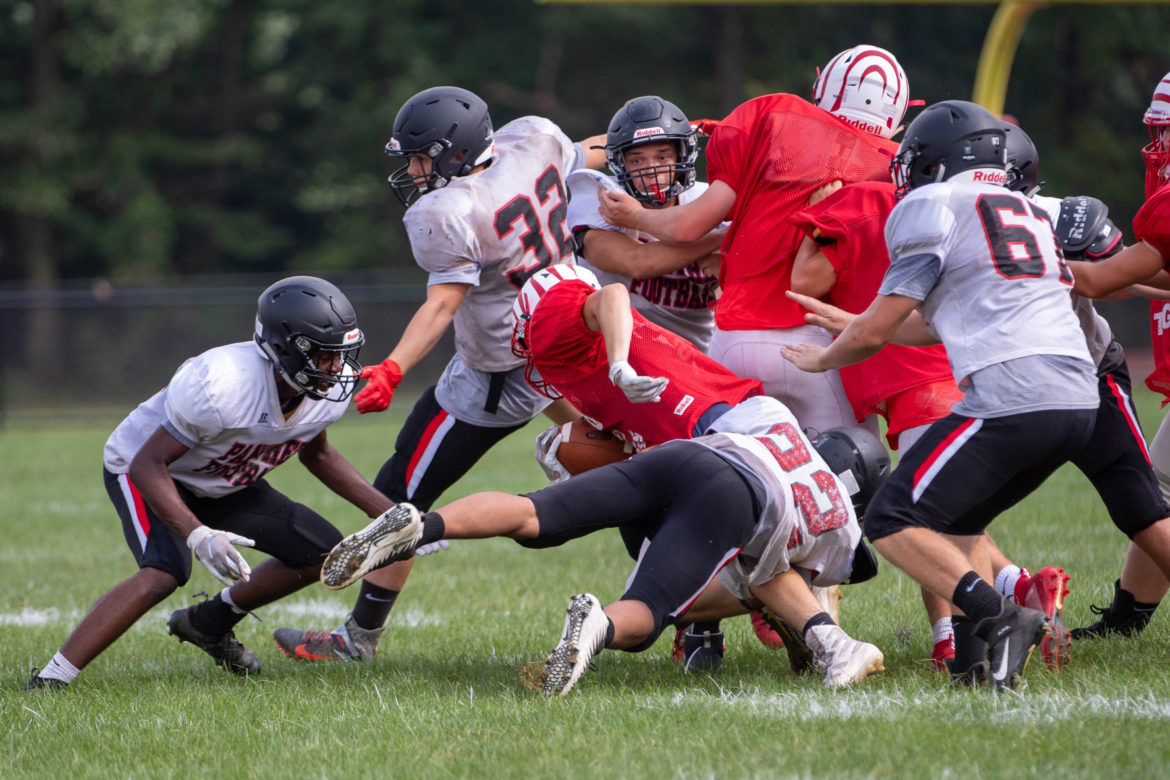 The coaches decided to add three minutes to the clock for the Fleetwood offense to operate.  After a couple of plays, the Panthers gave up a 40-yard bomb allowing the Tigers to advance all the way down to their 30-yardline.  However, following a pair of sacks by Aiden ‘Stonewall’ Renninger and one by David Osman, the Tigers were faced with a 4th & 20 from the Panther 40-yardline. With seconds remaining on the clock, Fleetwood’s ‘Hail Mary’ pass was broken up by Dante Mahaffey that closed out a very competitive scrimmage. 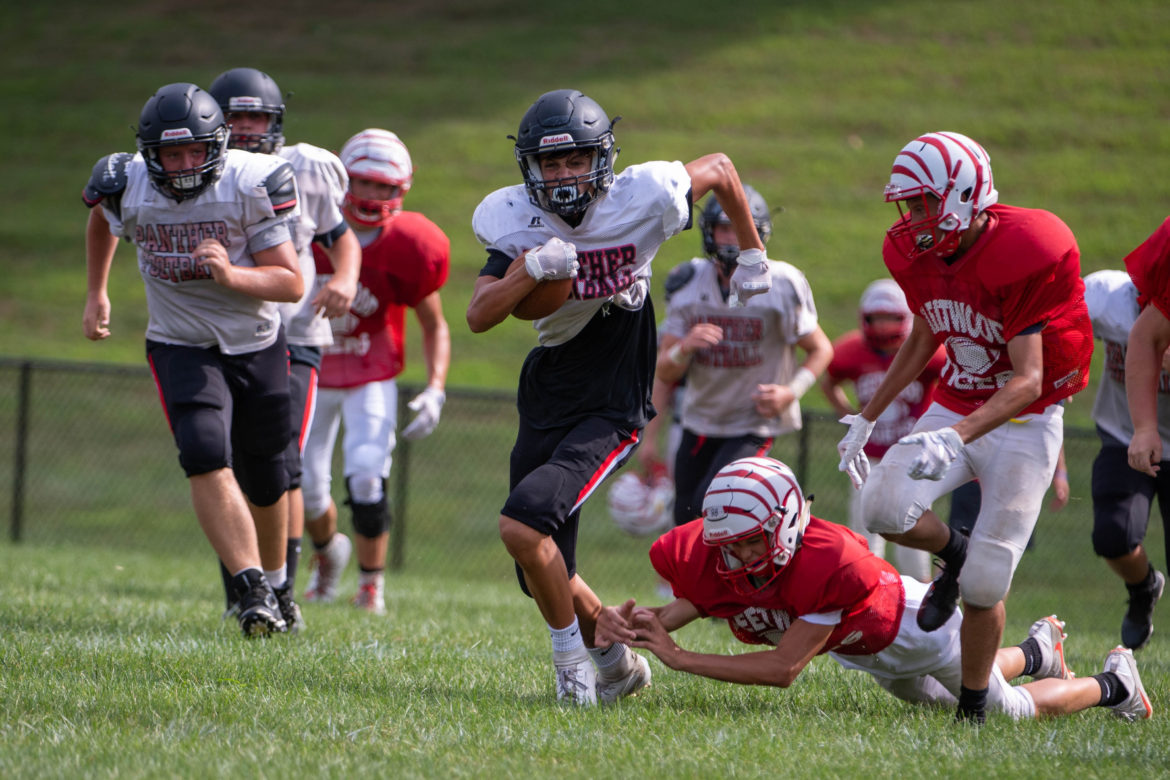 Panther freshman Alex Magnotta getting up field after securing a catch.

The young and inexperienced Panthers do have a handful of returning starters including Evan Deily (OL/DL), David Osman (OL/DL) and Dante Mahaffey QB/CB).  Mahaffey is only a sophomore who is credited with over 900 yards passing and almost 400 yard rushing during his freshman campaign.

When Mahaffey throws, he has a stable of excellent receivers to choose from that include sophomore Ty Csencsits and senior Chris Orlemann. Csencsits earned his way into the Panther lineup late last season while Orlemann returns after sitting out his junior year.  Both of these guys can catch the football and will bring many highlights to Panther fans. 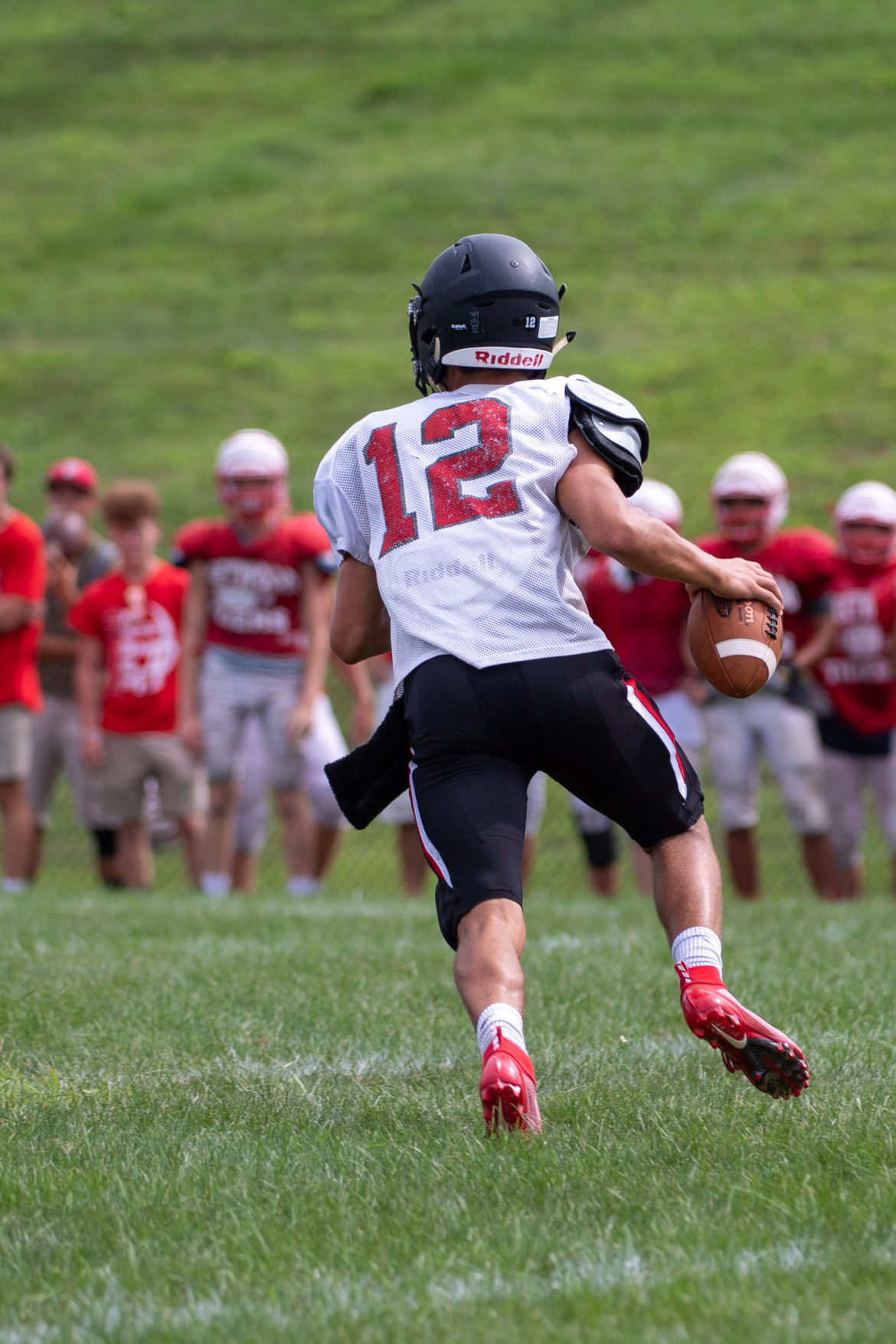 Dante Mahaffey looking to throw on the run against the Fleetwood Tigers.

Sophomores Eternal Aris and Anthony Orlemann along with freshman Alex Magnotta are also playmakers from their wide receiver positions. Senior Aiden Renninger has had a great preseason after exchanging his backup quarterbacking duties to take over as the Panthers new tight end.  Renninger has proved to be consistent and reliable. The Panthers have a quality stable of pass catchers.

When the Panthers pound the football at their opponents look for Ramel Moore, Damian Garcia and Josh Torres to be carrying the load.  Moore is a transfer from Nazareth who is a punishing runner. Garcia is a sophomore with a nice blend of size and speed while Torres is a very capable freshman.  Saucon Valley will break in a new fullback due to the departure of Christian ‘Mongo’ Alling.  Junior Chris Mann and freshman Tyler Pfizenmayer looked to replace Alling who is now playing at King’s College. 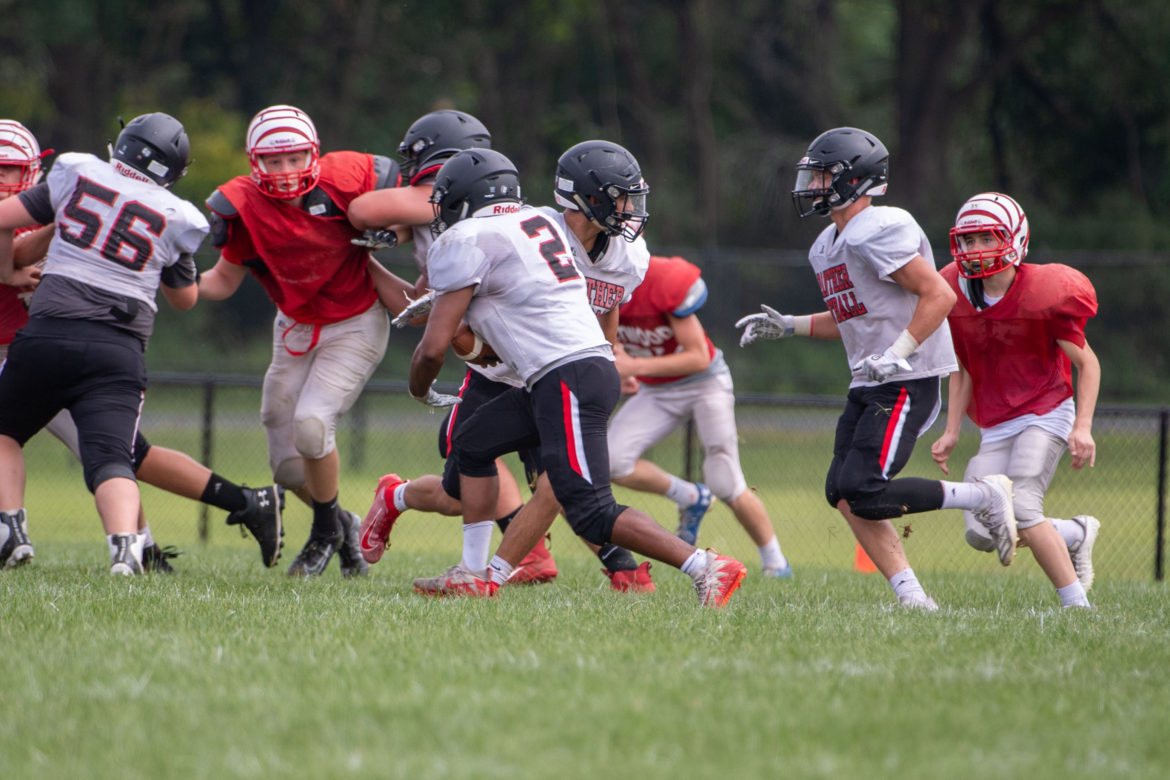 Other offensive newcomers that will catch your eye are juniors Eli Deily and sophomore Cody Swinney.  Deily tips the scales at 6’4, 290 and will play along the offensive and defensive lines while Swinney is getting a look at the Center position with Osman possibly bumping to guard. 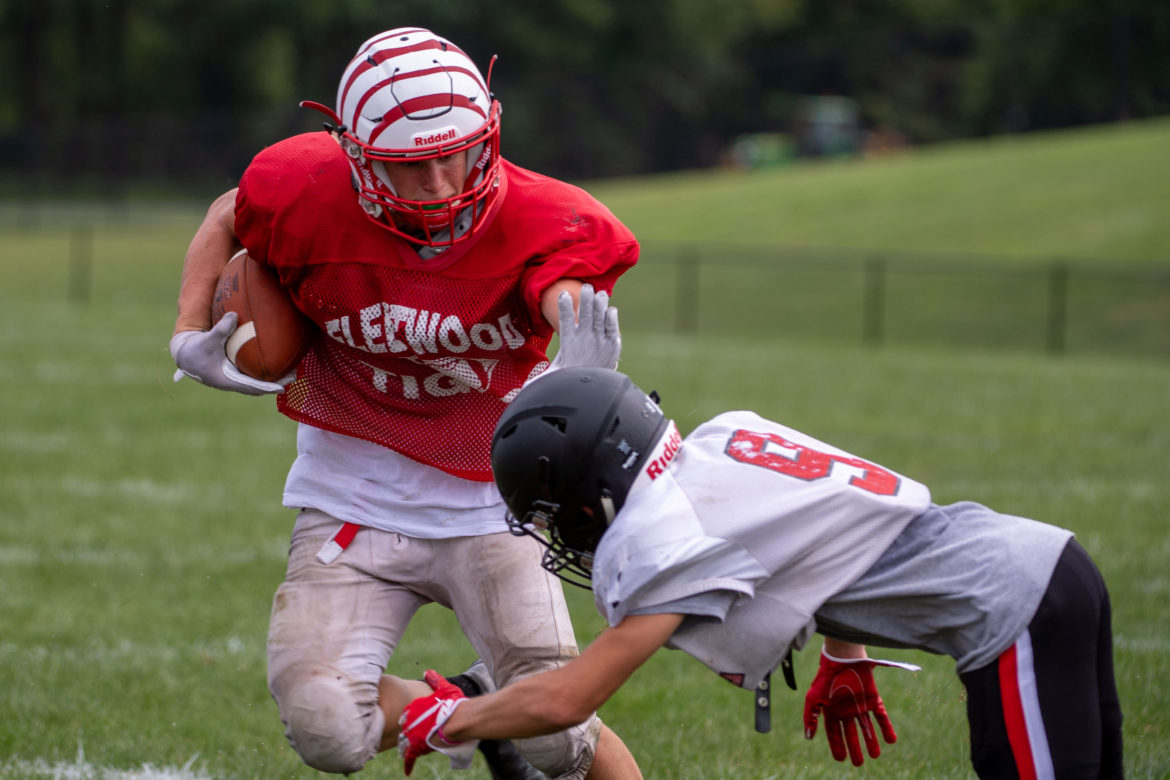 Sophomore Anthony Orlemann extends to bring down the Tiger receiver.

Defensively, it looks like the Panthers will alternate between an odd and even front.  ‘Big Tim’ Weaver is now cutting his teeth in the Big-10 at Indiana University, but the Panthers return some of their Hogs in senior Evan Deily and junior David Osman.  Evan’s bigger, younger brother Eli  along with Nick Warnke bring quite a bit more beef to the party.  Eli is a junior and has had a great preseason while Warnke, a senior, is looking much quicker and faster.  Warnke played behind Weaver last season and is a very good football player.

Like most of the team, the Saucon Valley linebacking corps is young and inexperienced.  But, hard-nosed play should be expected from Chris Mann, Ramel Moore, Greg Nolf, Tyler Pfizenmayer, Aiden Renninger and Josh Torres.  ‘Phizzy’ and Torres are both freshmen who have been making plays throughout the summer sessions.

The Panther defensive backs are led by senior Chris Orlemann.  Orlemann missed last season but returns as a ball-hawk.  Sophomores Eternal Aris, Ty Csencsits, Dante Mahaffey and Anthony Orlemann bring a whole lot of skill into the secondary.  Freshmen Cameron Brown and Travis Riefenstahl are looking to make contributions at corner back.

Other contributors on defense will be seniors Vincent Rao and Dale Sorensen.  Both will make their mark after settling in along the defensive line or at linebacker. 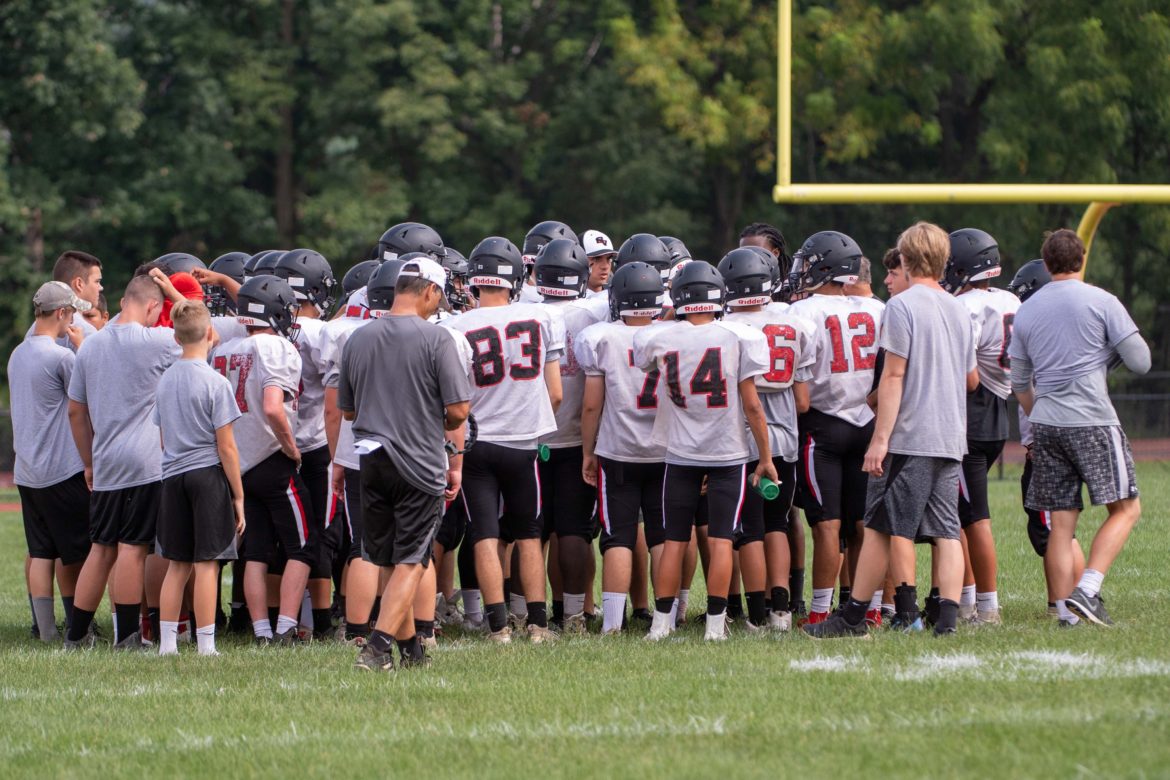 Huddle up and let’s go!

Up Next: Saucon Valley will host the Southern Lehigh Spartans in the 2019 Colonial League opener on Friday night, August 23rd at 7 p.m.