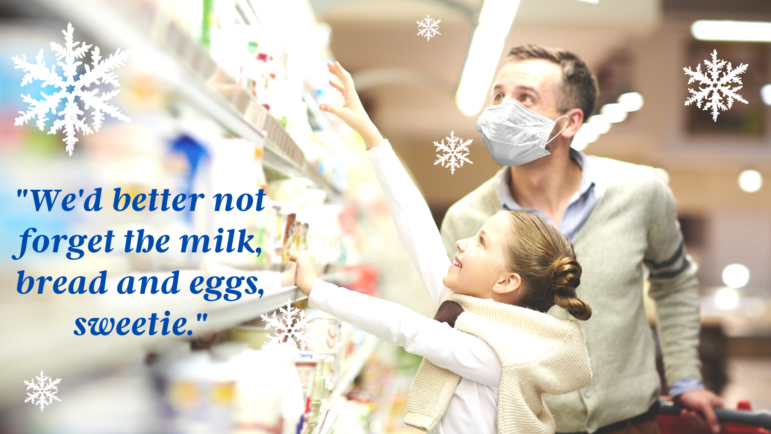 Grocery store dairy aisles have largely been replenished since panic-buying reduced them significantly in March and April, as a result of the coronavirus pandemic. Toilet paper stock on the other hand…

If you thought the weather in 2020 has been weird so far, Mother Nature wants you to hold her proverbial beer. Pennsylvania forecasters says it’s about to get weirder, and possibly even historically odd.

Pennsylvania Weather Action Wednesday released a “first call” forecast predicting accumulating snow for much of the state on Friday and calling for up to 3 inches across a wide swath of central and northern Pennsylvania, with isolated totals of up to 5 inches possible in places like the higher elevations of the Poconos.

Lehigh Valley Weather Authority is also predicting snow, although forecaster Tony Luchini stressed in a Facebook post Wednesday afternoon that any accumulation in this area would likely only occur on grassy surfaces and “in spots.”

The National Weather Service has yet to weigh in on the possibility of snow across the  area. It is currently forecasting a low of 32 degrees Friday night, along with rain and snow showers after 2 a.m., but “little or no snow accumulation (is) expected,” it said.

Even if it amounts to little more than a few flakes flying, however, forecasters are in agreement that any snow this late in the spring would be a remarkable weather event, with Luchini calling the models he is interpreting for Friday nearly “unbelievable.”

“It certainly is fitting with the theme of 2020,” he said, referencing an unusually mild winter during which the area saw temperatures that averaged as much as eight degrees above normal, with almost no snow at all in December, January, February and March.

By the time temperatures began to fall to seasonal norms (or below them) it was early March, the coronavirus pandemic had arrived in Pennsylvania (along with restrictions on public gatherings that culminated in a statewide stay-at-home order issued April 1) and weird winter weather–or a lack thereof–seemed to be the least of anyone’s concerns.

Yet the wacky weather continued.

Spring flowers bloomed, but flurries also fell and temperature-wise April seemed colder than the “winter of 2020” that had preceded it. The cooldown seemed particularly ironic, since under the stay-at-home order outdoor recreational activities were among the few that millions of Pennsylvania residents could still enjoy without fear of violating it.

Temperatures finally seemed to be returning to seasonal norms this past weekend, when they reached the seventies and even the low eighties on Sunday. Parks and trails were packed, as residents of Saucon Valley and beyond enjoyed the spring sun and with it a sense of normalcy that has been absent from most people’s lives for the past two months.

News broke Tuesday that the Hellertown Pool won’t open this summer because of the pandemic, but at least the weather would still be pleasant. Right?

Then the weather map started to turn sideways. Again. And ironically, it’s doing it just as parts of the state are preparing to reopen under a plan that allows areas to resume activity as COVID-19 incidence rates decline. In fact, Friday is the day 24 northern and north central counties–counties which could see more significant impacts from any snow that falls–will move from red to yellow, under Gov. Tom Wolf’s Plan for Pennsylvania.

Stay tuned, and continue to follow your local weather forecasters for updates on what is increasingly shaping up to be a most unusual Mother’s Day weekend, meteorologically.

A mid-May snow forecast may seem far-fetched, however, if there’s one thing 2020 should have taught us by now it is to expect the unexpected.

And look on the bright side. There is no need to worry about whether or not school will be canceled.