Tuesday was a day of digging out and cleaning up in Hellertown and communities all across the Lehigh Valley, after a powerful Nor’easter dumped as much as 36 inches of snow on the area over a 48-hour period. And for some, the work isn’t over yet.

Borough officials said Tuesday afternoon that contractors using borough equipment will be removing the enormous piles of snow that now line Main Street, blocking access from the street to the sidewalk and the businesses beyond, in many cases. Other borough roads and intersections will also receive the post-storm treatment, the announcement said. 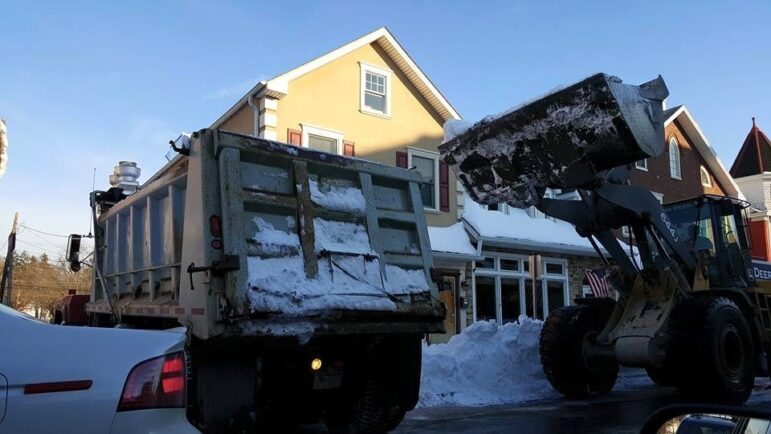 Above, crews remove large snowpiles from the 600 block of Main Street in downtown Hellertown on Jan. 26, 2016. A similar effort will be under way following this week’s snowstorm, which dumped about 28 inches on the borough. (FILE PHOTO)

In the meantime, the borough remains under a snow emergency until further notice, which means parking is banned on Main Street and other snow emergency routes.

All residents who had recycling pickup scheduled for Tuesday, Feb. 2 now will have their pickup on Thursday, Feb. 4.

According to the borough’s ordinance, residents have 24 hours from the end of a storm to remove snow from sidewalks.

The heaviest snow ended Tuesday morning, but light snow lingered in the area until around 4 p.m. Tuesday, which was when the National Weather Service’s winter storm warning for Lehigh, Northampton and Upper Bucks counties expired.

By then an astounding 36.1 inches of snow had fallen at Nazareth, which recorded the highest total of any Lehigh Valley muncipality. Other snowfall totals reported by the National Weather Service included:

Click here to review the complete list of totals from across eastern Pennsylvania, New Jersey and parts of Delaware.

The snowstorm was the biggest to strike the area in just over five years, and came close to matching the late January blizzard of 2016 that dumped more than 30 inches of snow on much of the Lehigh Valley.

The Jan. 31-Feb. 2 storm was a longer-duration weather event and–like the 2016 storm– overperformed, shattering the predictions of many weather forecasters. As recently as Saturday, the National Weather Service predicted that it would deposit just 6 to 9 inches. Whether this year’s storm becomes known as the Groundhog Day Blizzard remains to be seen, but fittingly Punxsutawney Phil emerged from his home at Gobbler’s Knob Tuesday to see his shadow, meaning six more weeks of winter are on the way.

As of Tuesday evening, no significant storms appeared to be on the horizon, although there is a chance of snow showers Thursday night and Friday morning as well as another chance for snow showers Sunday night, according to the NWS forecast for Hellertown.

Beyond Sunday, more frigid air is expected to invade the region, with highs in the 20s and lows in the single digits currently forecast. Until the,n temperatures will remain relatively mild, with highs above freezing expected Wednesday, Thursday and Friday.

Schools in the Saucon Valley and many surrounding districts will be closed again Wednesday, which will be the third day in a row without classes for students and staff.

For an updated list of cancellations, closures and delays, visit the Channel 69 News StormCenter.

For additional updates on traffic, weather and more, follow Saucon Source on Facebook and Instagram. Subscribe to our free newsletter to get the latest headlines in your inbox, and sign up to become a member to help support our the local news you value. 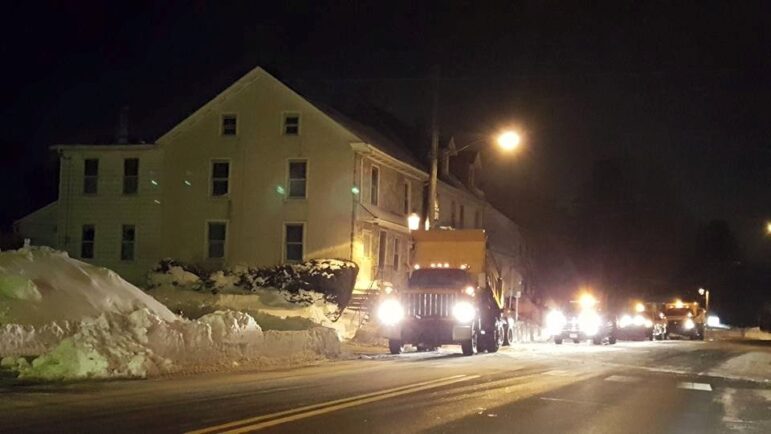 Above, night-time snow removal operations along Main Street in Hellertown following the Blizzard of 2016. Five years later, a similar effort is getting under way, after nearly 30 inches of snow fell over a 48-hour period from Jan. 31 to Feb. 2.