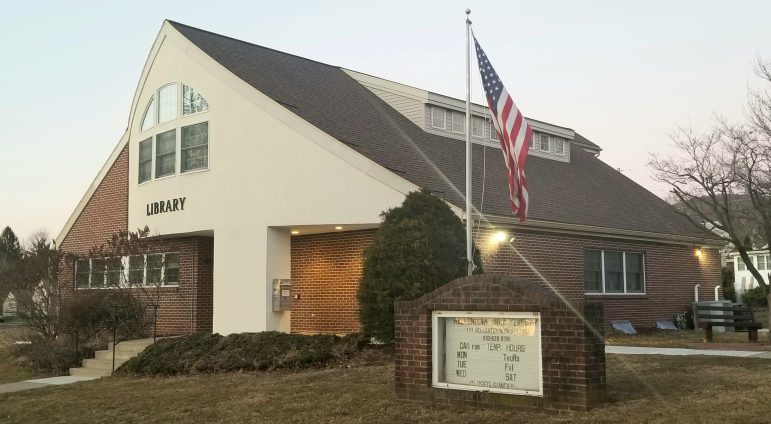 The Hellertown Area Library and the borough of Hellertown have been involved in a dispute with Lower Saucon Township that began when Lower Saucon Township Council voted 4-1 to reject a new 5-year library services agreement in January. In lieu of the new agreement, council approved $50,000 donations to both the HAL and the Southern Lehigh Public Library; funding which both libraries have so far declined. At the same meeting, Lower Saucon Council authorized filing a lawsuit against the HAL if it denies township residents access to its programs and services. In the ensuing conflict that arose, Hellertown Borough Council voted to pause all of the borough’s agreements with the township for review.

A meeting about “issues pertaining to the Hellertown Area Library” was held last week, Mayor David Heintzelman revealed in a letter about it which he read at Monday night’s Hellertown Borough Council meeting and shared on the borough’s Facebook page.

One purpose of the gathering was apparently to foster a better understanding of what issues may be preventing Lower Saucon Township officials from adopting a new agreement with the Hellertown library, since an earlier agreement ended on Jan. 31.

The agreement expired after council voted 4-1 to reject a proposed five-year agreement in lieu of offering the library a $50,000 donation and, separately, to initiate a lawsuit against the HAL if township residents are denied access to its programs and services.

That donation was later rejected by the HAL’s board of trustees, which has floated a proposal to negotiate a new agreement with the township that so far has not been entertained publicly by township council.

An effort to put the proposal on Lower Saucon Township Council’s meeting agenda for Wednesday, April 20 was apparently unsuccessful, as the agenda does not include it.

In Heintzelman’s letter, he named only one issue brought to the table by township officials, which he said is an interest in regionalizing library services.

“This is a new concept being presented to both Hellertown borough and the library,” he said. “All parties agreed to take the concept back to their respective bodies, receive initial reactions and create conversations of thoughts and concerns, which will be used toward possible future discussion… Our promise is to be transparent in all our discussions.”

“We ask for patience,” Heintzelman said. “As we learn about the regionalization process, we will learn from other Commonwealth of Pennsylvania municipalities that have embraced this model. If it does not fit for our communities we will move on separately.”

Lower Saucon Township Council blogger Andrea Wittchen recently speculated on what possible issues related to the library could be on the township’s end in a blog post titled “What’s the Excuse This Time?” Regionalization of library services was not one of them.

In her blog, Wittchen postulated that the stalemate over a new library services agreement could be a result of “bullying gone bad” or possibly rooted in class-driven ideology:

“In this explanation, LST Council is more than happy to steal services from HAL for as long as HAL (who are suckers in their opinion) is willing to supply them and then, when that ends, we’re all just out of luck. Or perhaps we will have forgotten about it. It’s in this context that the threat of a lawsuit is useful. The idea is that the Township has the funds to sue the ‘poor’ library and so the Library will just kowtow to the township’s demands.”

The idea of pursuing a regionalized approach to library services has come up at recent township council meetings within the context of discussions about a possible agreement, but other subjects–including alleged lack of transparency by library trustees and borough officials during negotiations for the new agreement last year–have been the main focus of criticism. Little to no evidence to support those claims has been presented to date.

Whatever the reasons for the current stalemate may be, the township’s refusal–so far–to reconsider a library agreement with the HAL has been unpopular with many residents, who have voiced their frustration at meetings, in letters and by displaying yard signs. 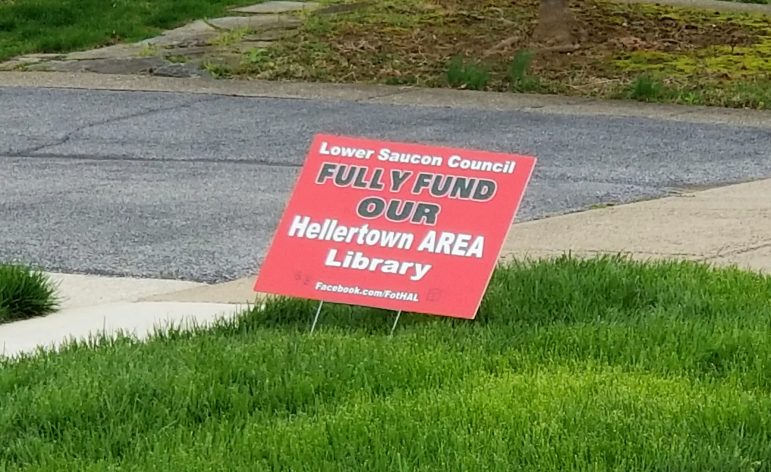 A yard sign sold by the Friends of the Hellertown Area Library is displayed along Magnolia Road in Hellertown on Tuesday. The signs have been sold both to raise awareness about the lack of a service agreement with Lower Saucon Township and to raise money for library programs and services. Except for a modest amount of revenue the HAL received from the state, all Lower Saucon funding for the library ended with the expiration of the township’s former service agreement on Jan. 31, 2022.

Comment at township council meetings is reserved for residents only, following a meeting agenda policy change that was adopted by a 4-1 vote in January.

For individuals unable to attend meetings in person, Wittchen has been livestreaming them via the Facebook page for her blog, Saucon Shenanigans.

Lower Saucon Township residents continue to have access to the Hellertown Area Library, although how long it will be available without a new agreement is unknown.