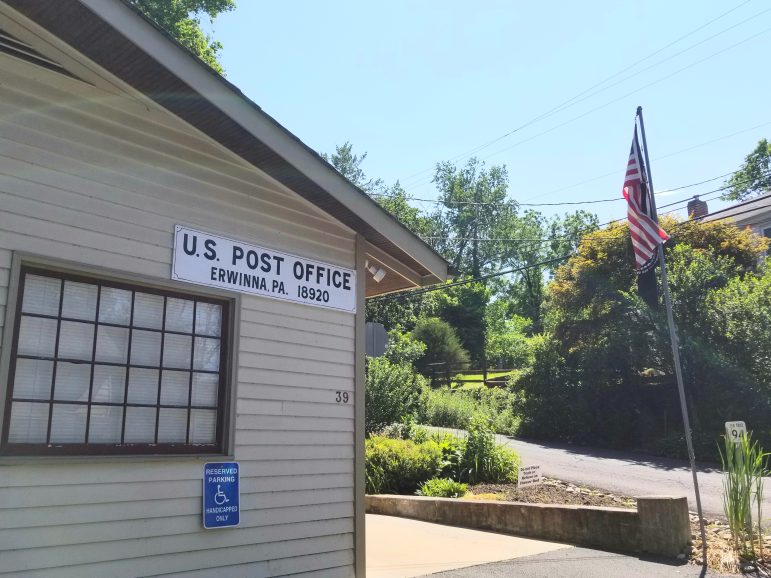 The tiny village of Erwinna in Tinicum Township is today home to a post office and a small cluster of historic homes, but nearly 200 years ago it was a hub for canal boat construction. The popular D&L canal passes through Erwinna, and signs along it detail the history of the settlement for hikers, bikers and others who use the canal tow path as a recreational trail.

In a previous “Fun Day Trips” post we told readers about the Nockamixon Cliffs, a natural wonder along the Delaware River just south of Kintnersville, Bucks County.

Heading further south along the Pennsylvania side of the river are many other recreation areas, beauty spots, historic sites and communities to visit and enjoy within the Delaware & Lehigh National Heritage Corridor.

One of them is the village of Erwinna, which is located just off River Road and Headquarters Road along the D&L canal in Tinicum Township.

Today the village is little more than a cluster of well-maintained homes and a post office, however in the 19th century it was a center of industry, as signs along the canal explain. 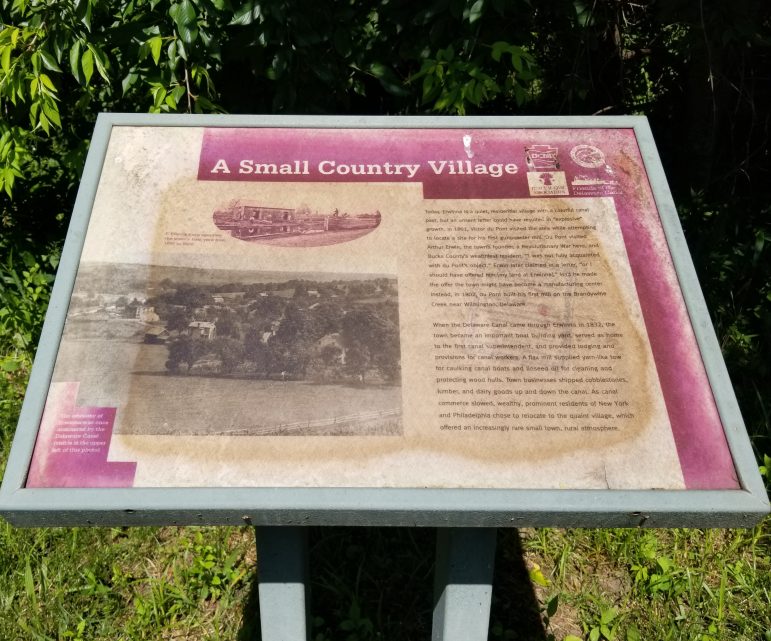 A marker along the D&L Canal trail near the village of Erwinna, Bucks County, highlights some of the area’s unique history.

Erwinna was so named in honor of Arthur Erwin, who founded the settlement after serving heroically in the Revolutionary War, according to a canal trail marker provided by the Department of Conservation & Natural Resources, the Tinicum Civic Association and other groups associated with historic preservation in the area.

The History of Erwinna

The marker notes that Erwinna was visited by the founder of the Du Pont chemical dynasty in 1801. Although Victor Du Pont ultimately established his gunpowder manufacturing operation near Wilmington, Del., it explains that “the town might have become a manufacturing center” had Erwin known what he was planning to develop.

In the 1830s, following the construction of the Delaware Canal, Erwinna became “an important boat building yard,” the marker states. Later, “as canal commerce slowed, wealthy, prominent residents of New York and Philadelphia chose to relocate to the quaint village, which offered an increasingly rare, small town atmosphere,” it states.

Today, Erwinna retains that atmosphere, and remains a popular location for trail users to stop and enjoy the scenic surroundings.

Nearby are several other points of interest along or near the river, including Tinicum Park, the village of Frenchtown, N.J., and Sand Castle Winery, to name just a few.

Note: Some sections of the D&L Canal in Bucks County are currently undergoing rehabilitation. For updates about trail obstructions and construction-related closures, visit DelawareAndLehigh.org. 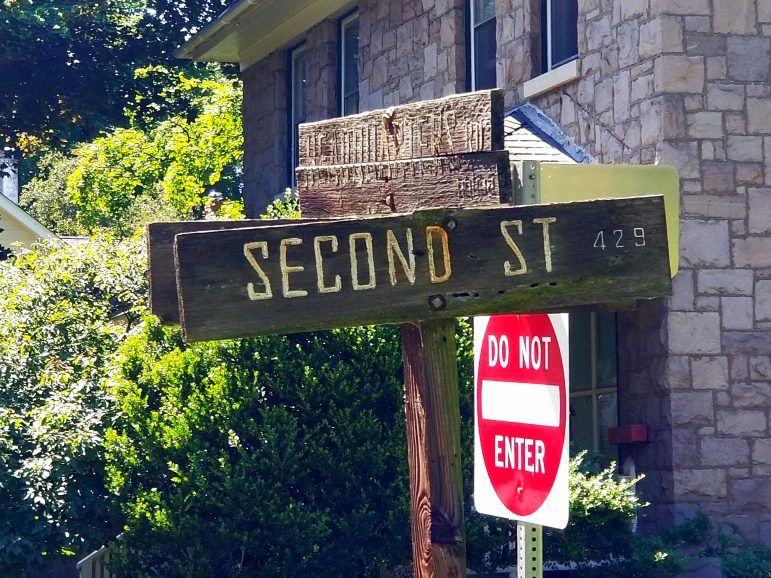 The village’s street signs are unusual because they are carved out of wood; a material that gives them a rustic charm. 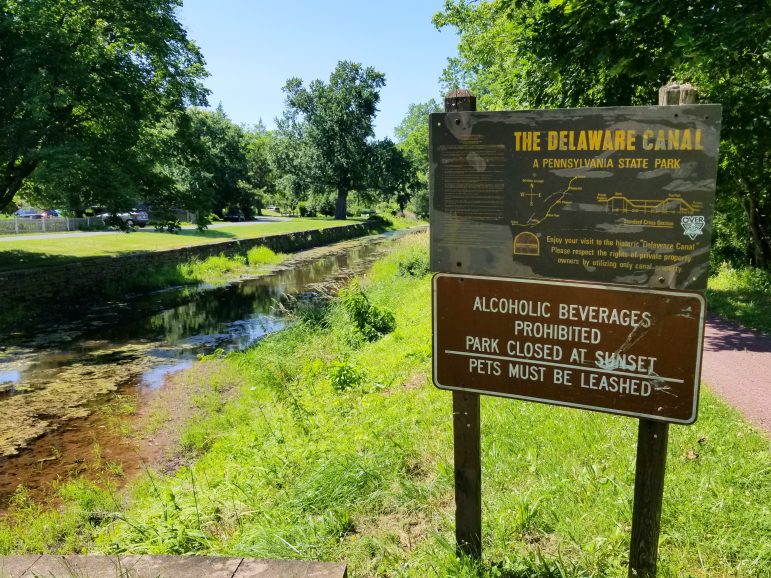 Above, a view of the D&L Canal and tow path from the area of Headquarters Road in Erwinna, Bucks County. 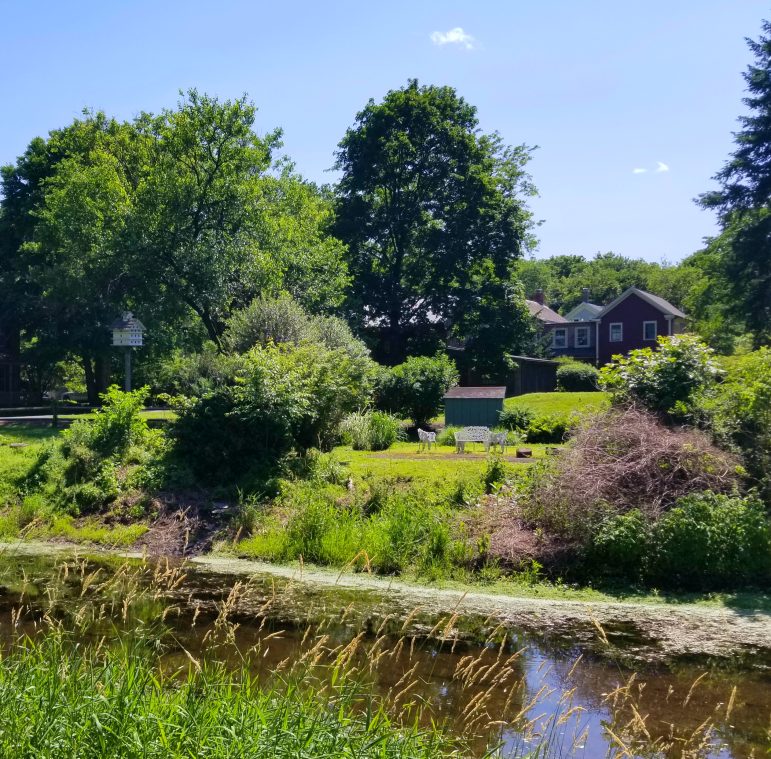 The historic D&L canal in Erwinna offers a stunning natural backdrop for hikers and bikers to enjoy year-round. 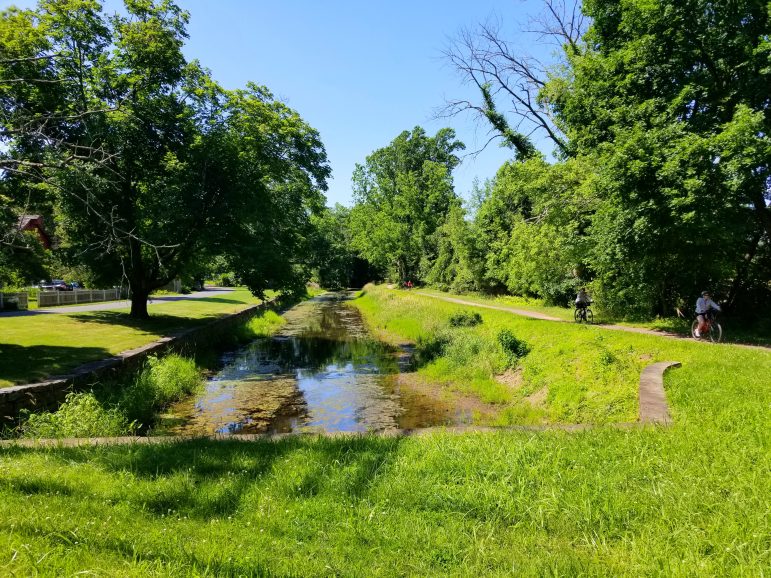 Pictured above, the D&L Canal in Erwinna is part of a transportation network that was developed in the 1830s, at the start of the Industrial Revolution in the United States. Today, the canal links together 165 miles of scenic countryside, historic sites and river towns between Bristol, Bucks County and Wilkes-Barre, Luzerne County. The canal tow path provides recreational opportunities for visitors to the areas that are preserved as part of the Delaware & Lehigh National Heritage Corridor.