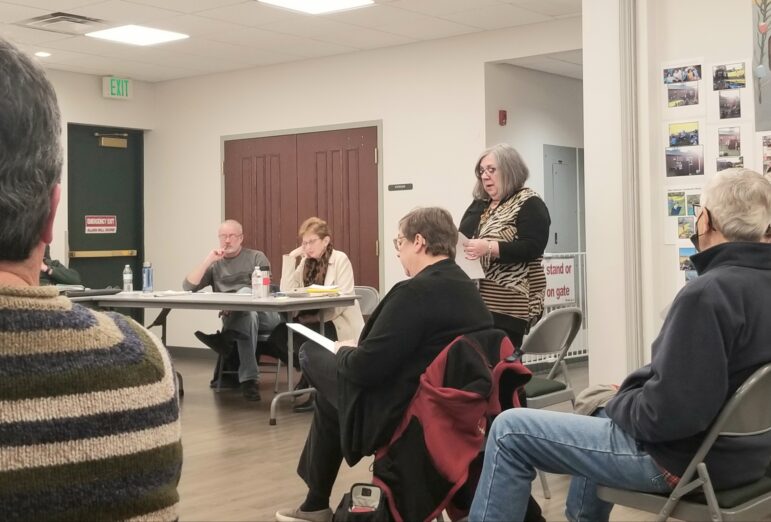 Southern Lehigh Public Library’s (SLPL) Board of Directors met Tuesday to reorganize and discuss pressing questions involving Lower Saucon Township; questions one board member said have dominated the majority of their meetings for the better part of a year.

Chief among the board’s questions was how to formulate a response to a question they said came up during a recent conversation between their solicitor and the solicitor for Lower Saucon Township Council, Linc Treadwell.

As detailed in the board’s Dec. 20 meeting minutes, Treadwell and SLPL board attorney Joe Leeson had an “informal” conversation late last year, during which “Treadwell asked if the SLPL board would accept a month-to-month agreement.”

Lower Saucon resident Priscilla deLeon–who is a member of township council–was at Tuesday’s meeting and told the board she had no knowledge of such an offer, which she said had her “in shock.” DeLeon went on to tell the board she wants to discuss library services issues at township council meetings, but that under council meeting rules two council members must request that a discussion item be placed on meeting agendas.

At Wednesday’s township council meeting, deLeon brought up the $10,000 per month agreement proposal during her council report, and also questioned Treadwell about it.

Treadwell said that by talking with Leeson he was simply following a council directive to look for library services at various local institutions, and said he has had many conversations in that vein over the past year. He told deLeon that he has prefaced these discussions by telling his counterparts that any decision would be up to council.

DeLeon also read from a letter she said was from a resident who asked in it how a month-to-month contract costing $10,000 a month would be superior to the rejected agreement with Hellertown Area Library, which would have cost less than $10,000 a month and would have provided residents with AccessPA services and materials from other libraries.

During their tense and at times terse exchange, Treadwell, however, disputed that there was any discussion of a contract.

DeLeon was the sole opponent of a controversial 4-1 decision council made last year to offer the Hellertown Area Library a $50,000 donation instead of entering into a new five-year agreement worth more than $500,000, and she has publicly maintained support for renewing a relationship between the township and HAL; support that a number of Lower Saucon residents who were in attendance at Tuesday’s SLPL board meeting voiced.

Many said they appreciate all that the Southern Lehigh Public Library offers its patrons, but that they would prefer HAL to be their home library again for various reasons.

“Hellertown needs our money,” said Bob McKellin, who displayed a hand-drawn map that showed the distance between the SLPL and eastern parts of Lower Saucon Township compared with the Hellertown library, which geographically is more centrally located.

“HAL…should really be our home library,” said Laura Ray of Lower Saucon. Like deLeon, Ray told the SLPL board it is difficult to find out any information about library services from Lower Saucon council, since it has not been made an agenda item in some time.

“We hear none of this,” she said. “Everything (Lower Saucon Township Council) is doing is behind everybody’s back. Nobody is supportive of it.”

Lower Saucon resident Victoria Opthof-Cordaro, who along with deLeon and Ray is campaigning for a council seat on a platform that includes restoring library services in Hellertown, also described a lack of transparency by the current council majority. 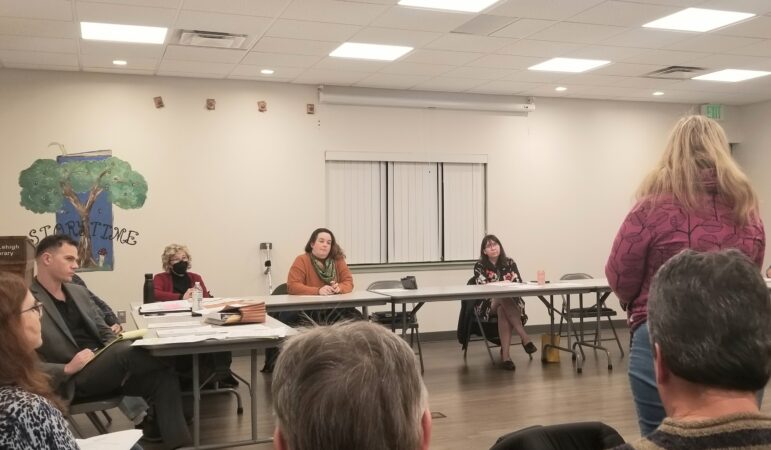 Above, Lower Saucon Township resident Victoria Opthof-Cordaro addresses the Southern Lehigh Public Library board regarding the potential for a month-to-month agreement for library services between the township and the library.

Opthof-Cordaro called it a “sham” that the offer Treadwell communicated to the SLPL board wasn’t previously discussed with township residents in an open council meeting.

Township resident and council blogger Andrea Wittchen cautioned the board to be careful if it decides to consider a month-to-month library agreement with Lower Saucon Township, which she said “could be an unreliable and deceptive partner.”

SLPL director Lynnette Saeger said she is concerned about entering into anything but a temporary agreement with Lower Saucon Township. Saeger contrasted an earlier “no strings attached” $50,000 donation the township made to the library with a month-to-month agreement she said likely would have them. She added that the library only accepted the earlier donation with “trepidation” and under threat of the loss of funding from some of their current member jurisdictions, which include Upper Saucon Township, Lower Milford Township, Coopersburg borough and Southern Lehigh School District.

A district consultant librarian and liaison between the SLPL board and the state Office of Commonwealth Libraries, Mark Sullivan, echoed Saeger’s concern about those vocal jurisdictions, which he said remain interested in exploring the possible expansion of SLPL’s service area to include Lower Saucon Township for budgetary reasons.

Sullivan suggested that SLPL could potentially serve Lower Saucon Township residents in 2023 without an agreement and benefit not only financially, but also by collecting valuable usage data about their newest patrons.

Saeger said that her perception is that the majority of Lower Saucon patrons utilizing Southern Lehigh library services would prefer to use the Hellertown Area Library.

One question that multiple board members had was about a statement SLPL released in the fall in which it said it wanted a more transparent discussion about library services to take place with Lower Saucon Township as a prerequisite for studying the matter further.

Board member Kathie Parsons said she was “frustrated” that SLPL’s requests to have Lower Saucon Township council representatives come before their board and to put a library services discussion on a LST council agenda hadn’t gone anywhere, and that Lower Saucon Township “isn’t doing anything above board.”

Leeson said that what he read into his discussion with Treadwell was that Lower Saucon Township representatives might be concerned about “blowback” they could receive if addressing the SLPL board in a public meeting, which he stressed was only his impression.

Ultimately, the board came to a consensus to maintain their status quo with regard to Lower Saucon Township–which currently means serving township residents with either a new Hellertown Area Library card or one that is expired–until their next meeting, with a goal of making a decision about the potential month-to-month agreement then.

The motion the board approved 5-0 also called for Leeson to set up a meeting with Treadwell as well as two representatives each from Lower Saucon Township and the SLPL board, and for Saeger to outline any potential concerns she has about a month-to-month agreement with Leeson in detail prior to that meeting taking place.

The next Southern Lehigh Public Library board meeting is scheduled for Tuesday, Feb. 21 at 6:30 p.m. in the library’s meeting room.