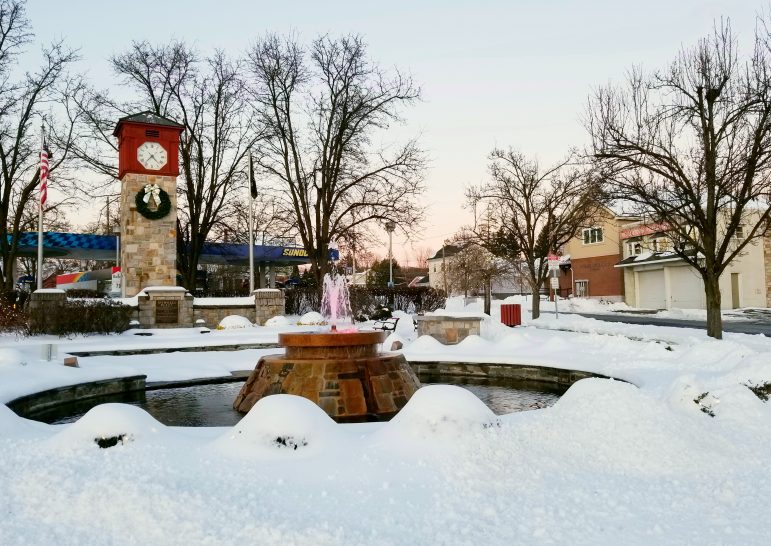 Detwiller Plaza in Hellertown was snow-covered before Christmas for the first time in several years following Wednesday night’s snowstorm.

Was it a late fall snowstorm or an early winter weather event? Technically, the Nor’easter that pounded Pennsylvania with snow, sleet and wind late Wednesday and early Thursday was the former. Whatever you want to call it though, it caused disruptions.

The mid-December storm also left behind plenty of work for residents near the holiday season’s peak, when many people’s to-do lists are packed with pre-Christmas tasks and businesses are eager to stay open to meet consumer demand for products and services.

Up to a foot of snow fell in the Lehigh Valley and temporarily made parking scarce in many places. Hellertown borough lifted its snow emergency by late Thursday morning, meaning vehicle owners could once again park their cars on Main Street and other roads.

Officially, 11.5 inches of snow was the storm total at Lehigh Valley International Airport, in Hanover Township, Lehigh County, according to the National Weather Service.

The NWS reported the following totals in a post-storm list released Thursday:

Snowplow operators weren’t complaining about the heavy snowfall, especially since last winter was virtually snow-free in the Lehigh Valley. The amount of snow that fell in a relatively short period of time meant a lengthy workday for some in the field, including public works and PennDOT crews.

Saucon Valley and many other school districts were closed Thursday, due to the weather, which also resulted in temporary vehicle and speed limit restrictions being placed on highways by PennDOT. The restrictions on I-78, Rt. 33 and other highways were lifted Thursday morning, after the snowstorm departed the area.

The heaviest snow stopped falling throughout most of the area by daybreak, and during the day Thursday the sun came out at times, facilitating melting on roads and sidewalks.

With temperatures forecast to drop into the upper teens Thursday night, however, there is the possibility that black ice may form on area roads and bridges.

In Hellertown and most other boroughs and cities in the Lehigh Valley, snow and ice must be removed from sidewalks within 24 hours of a winter weather event. Fire hydrants are also required to be dug out, for the purpose of public safety.

Want to see Christmas lights in the snow? Check out our 2020 Holiday Lights Tour & Contest, which features some of the prettiest decorated homes and businesses in the area. Be sure to cast your vote for your favorites by Tuesday, Dec. 22! 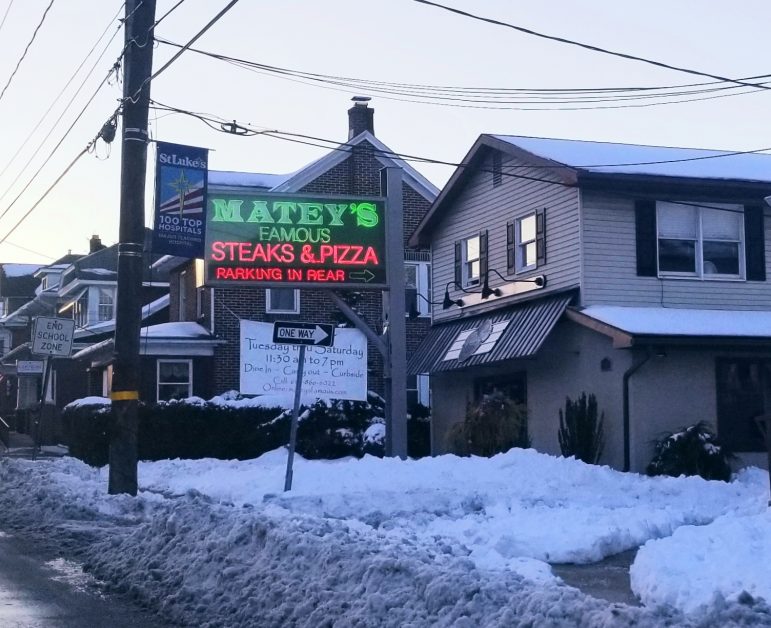 The sign at Matey’s Famous Steaks & Pizza on Broadway in Fountain Hill was like a ray of light for hungry Hillers after a day of shoveling out. 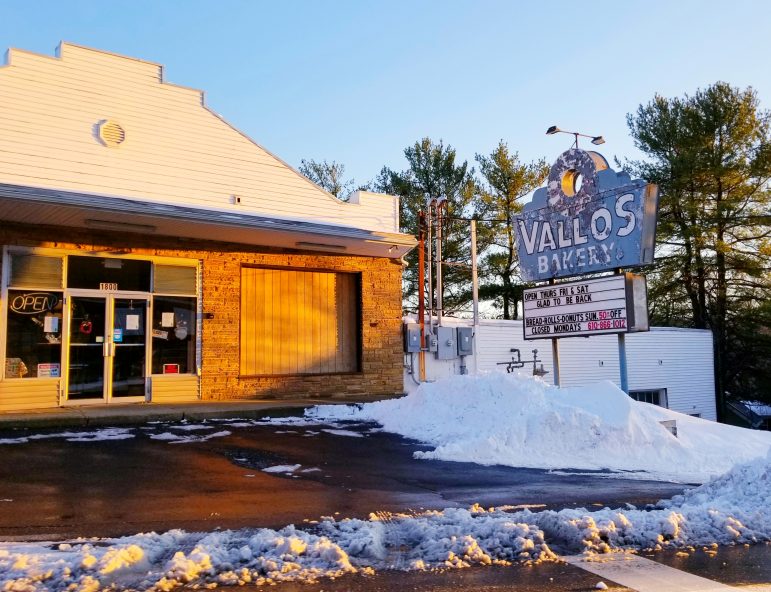 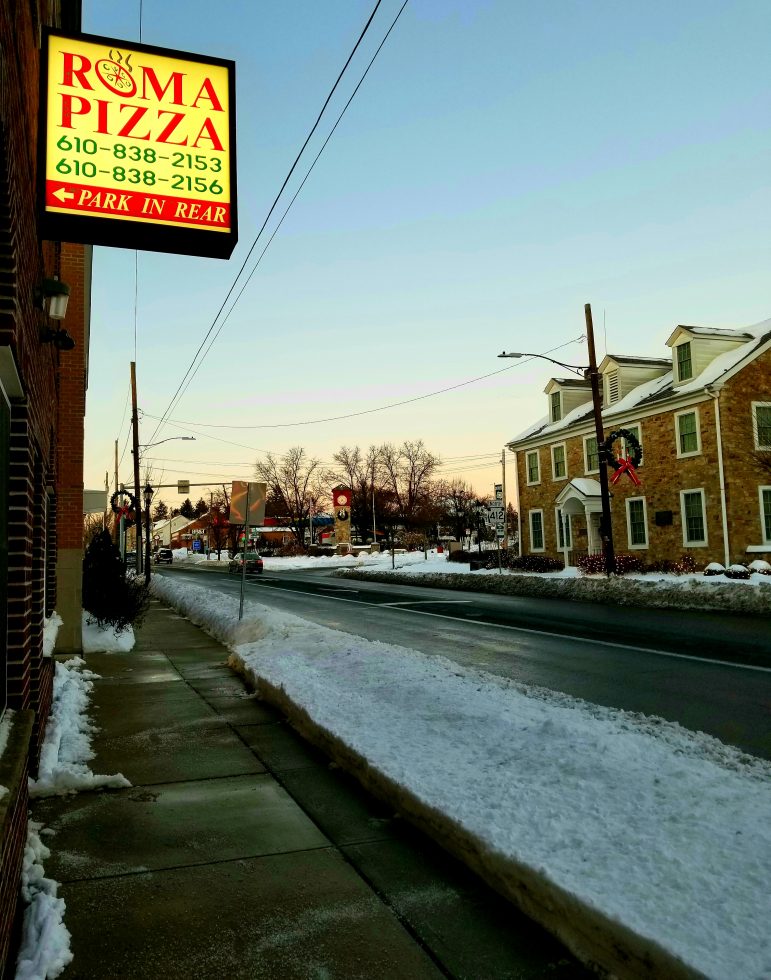 The sidewalk in front of Roma Pizza in Hellertown was scraped clean after Wednesday’s snowstorm. The easy access to the Main Street entrance didn’t appear to tempt many Hellertonians, who typically enter the restaurant from the rear, where there is a parking lot. 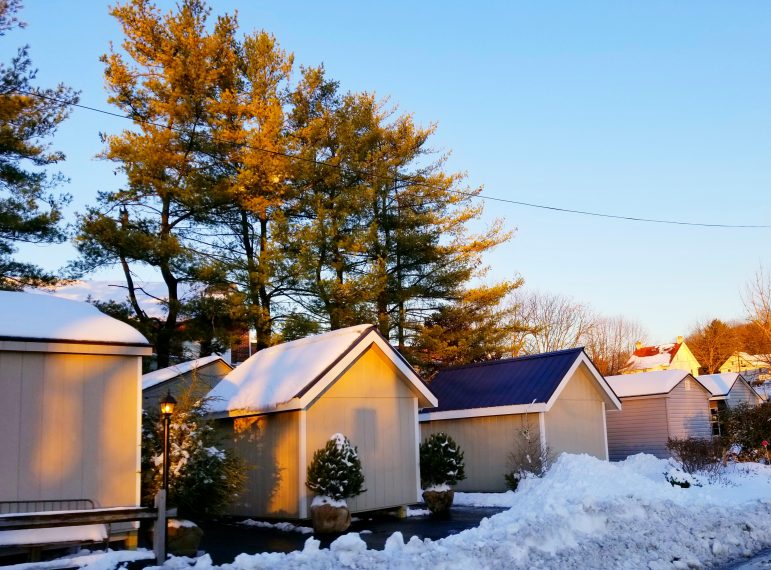 A new dining experience awaits customers at Bolete, where a collection of sheds is being transformed into a Nordic-style village. The huts will house dinner parties due to ongoing COVID-19 restrictions on indoor dining in Pennsylvania. 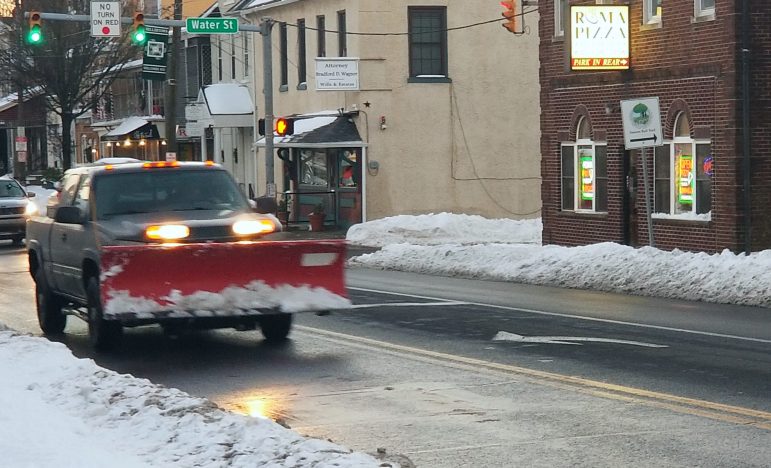 Although traffic was lighter than normal Thursday, plow drivers were noticeable on the roads as they headed from one snow-covered location to another. 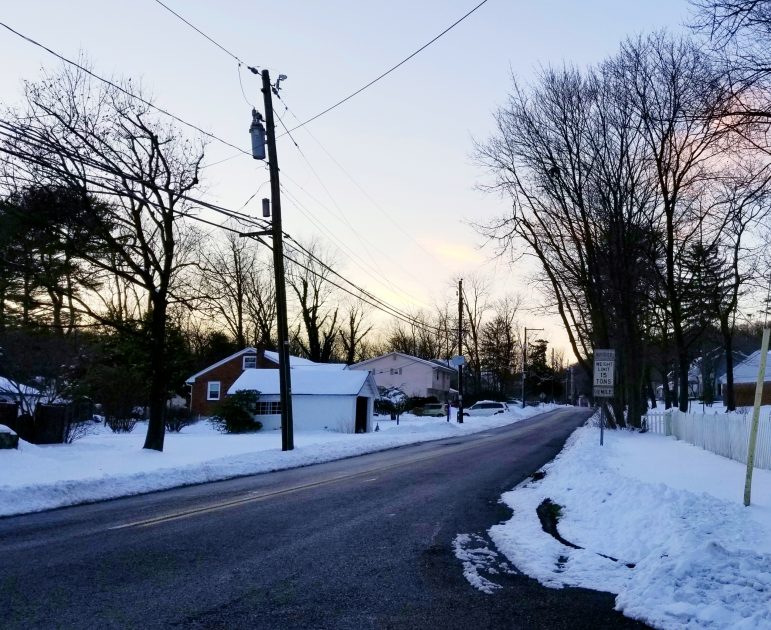 The view looking west on Black River Road from Old Philadelphia Pike in Lower Saucon Township, just after sundown Thursday, was serene. Most well-traveled roads were cleared of snow and ice down to blacktop by the end of the day. 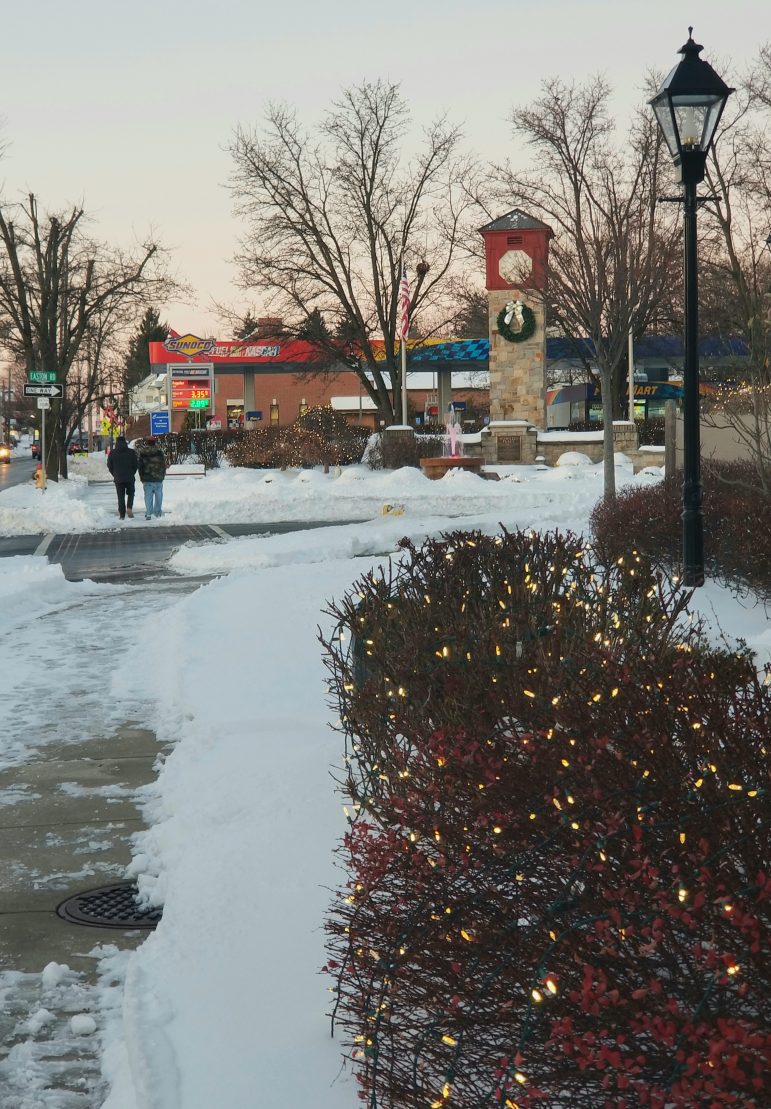 A few people strolled Main Street in Hellertown as the sun set on a snowy Detwiller Plaza. 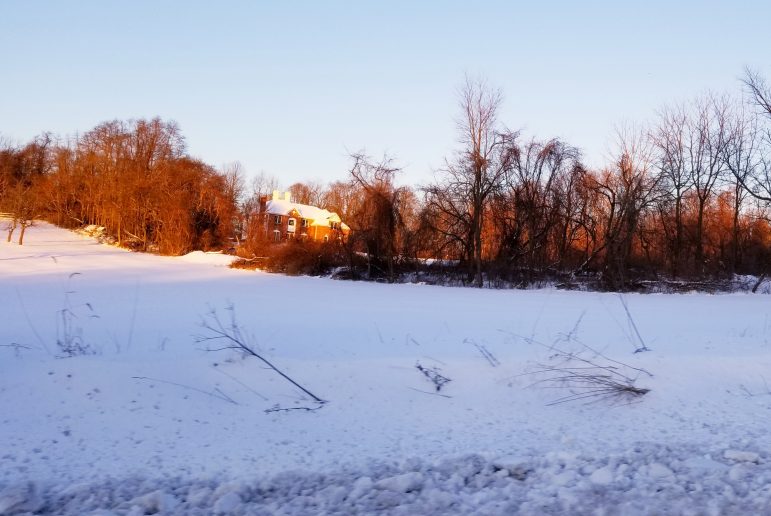 A snow-covered field along Seidersville Road in Lower Saucon Township was cast partly in shadow as the sun set on what had begun as a very wintry day. 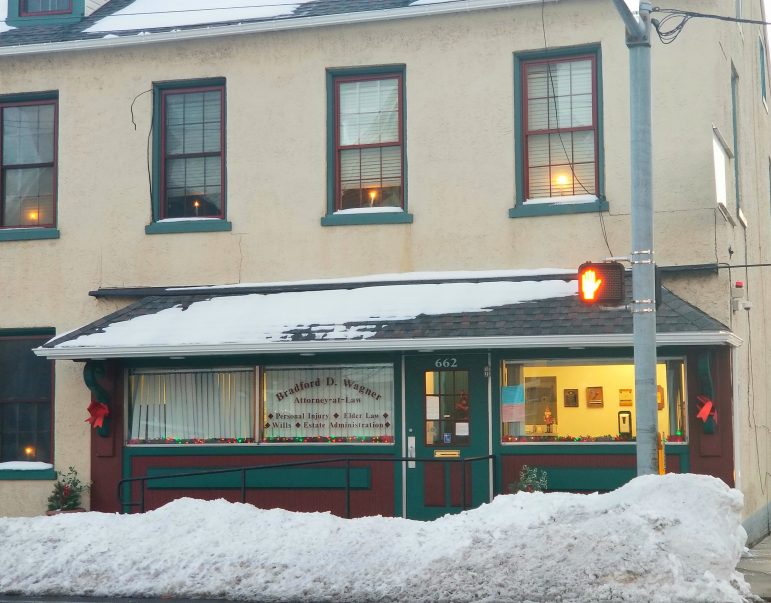 A bit of snow made the Law Offices of Bradford D. Wagner at Main and Water streets in Hellertown look all the more festive. 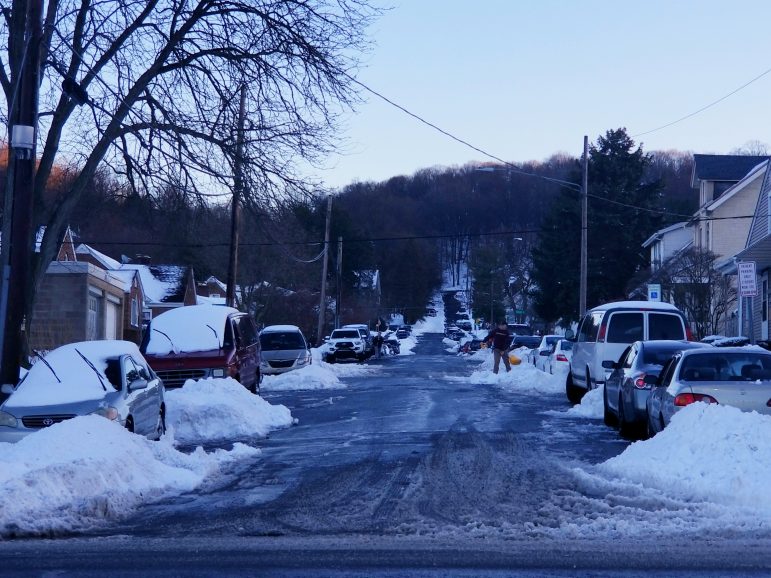 Shoveling out continued as daylight began to fade on S. Hoffert Street in Fountain Hill borough Thursday afternoon. Some cars remained buried by snow, their windshield wipers suspended in the air like the hands of a person under surrender. 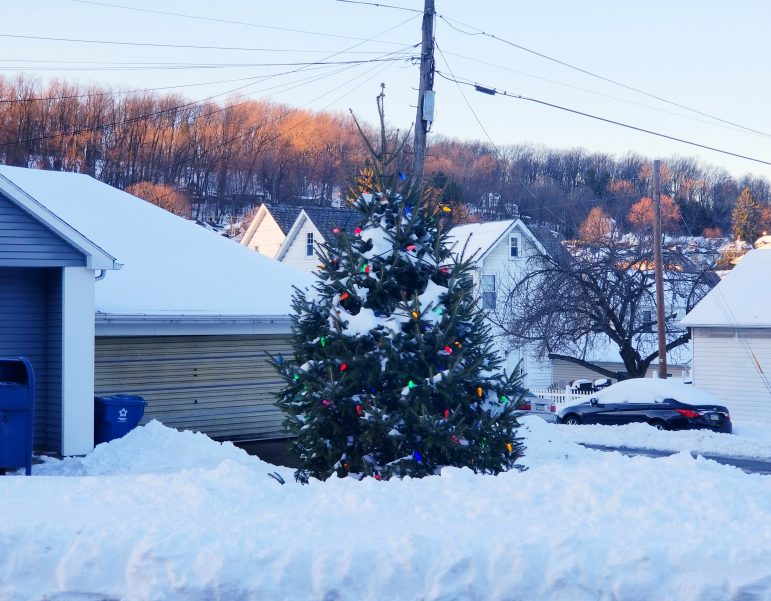 The borough Christmas tree in the triangle at N. Lynn Street and Broadway in Fountain Hill was surrounded by a deep blanket of snow. 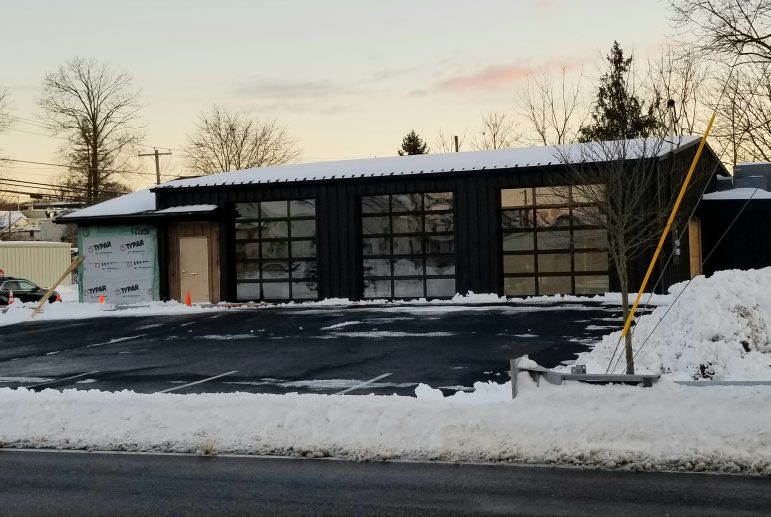 The parking lot of what will become Hellertown’s newest eatery–and the restaurant nearest the Saucon Rail Trail–sometime next year was clear of snow at Front and Water streets late Thursday afternoon. 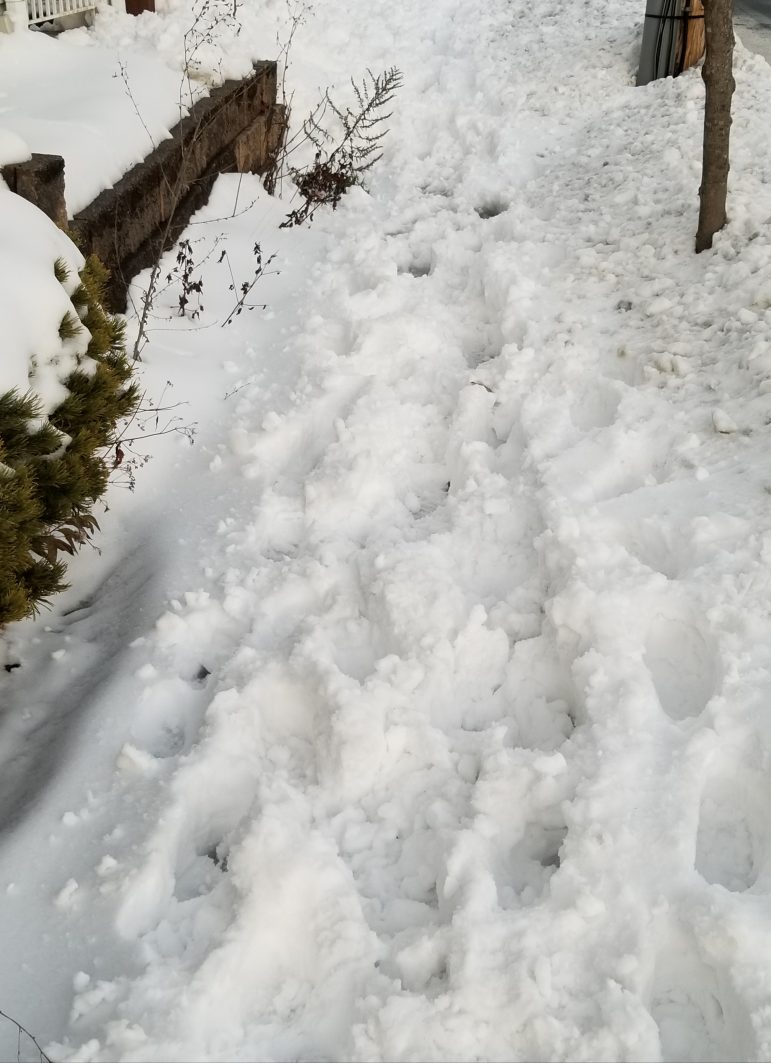 Although most borough sidewalks were passable, some still hadn’t seen shovel-action by late afternoon. This sidewalk along W. Water Street bore the evidence of many people walking along it. 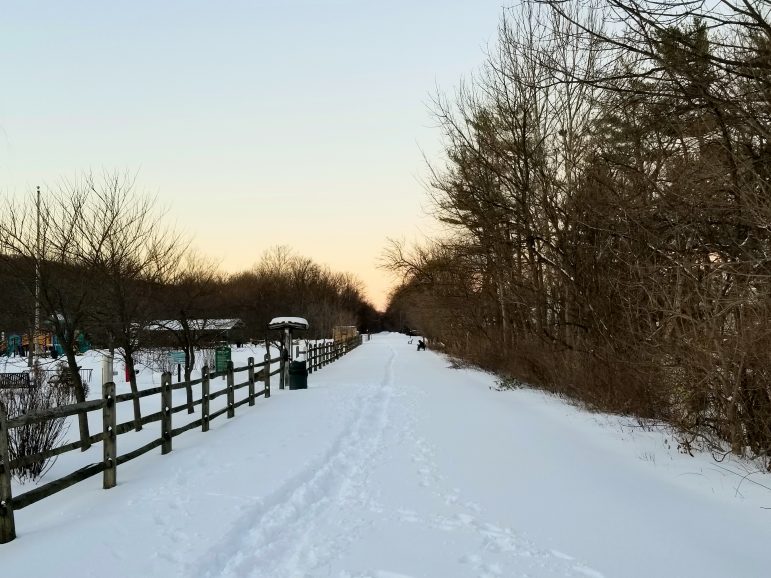 A good place for contemplation, the snow-covered Saucon Rail Trail at Hellertown’s Water Street Park was covered in footprints in the wake of the snowstorm. 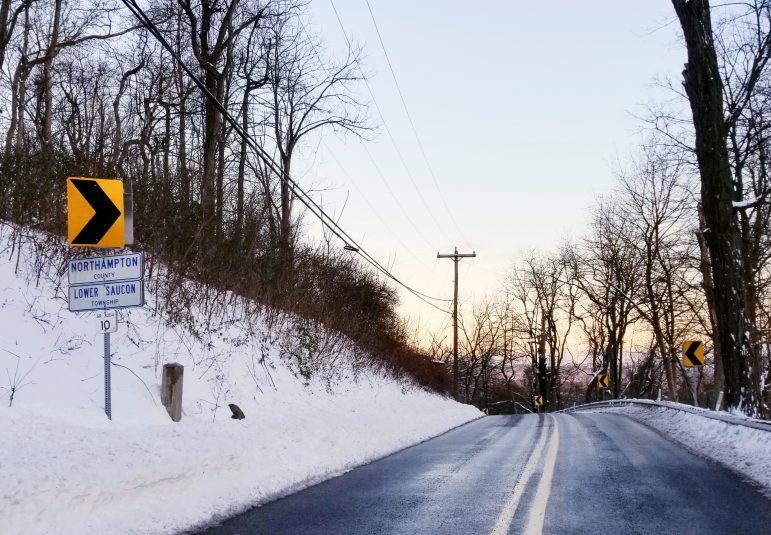 Seidersville Road was clear down to its blacktop at the Lehigh-Northampton County line, which is also the boundary between Salisbury and Lower Saucon townships. 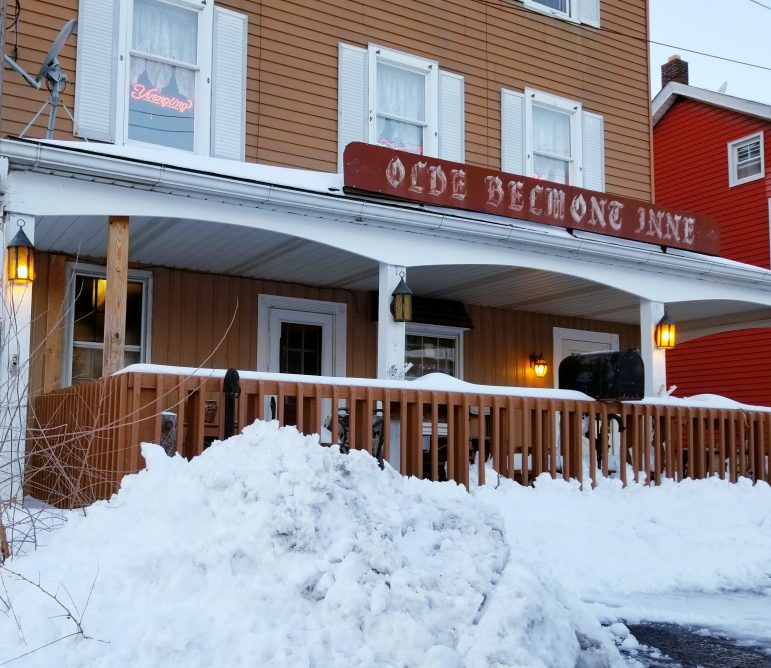 The cozy-looking entrance to the Belmont Inne on Old Philadelphia Pike in Lower Saucon Township was a welcome sight after the snowstorm. 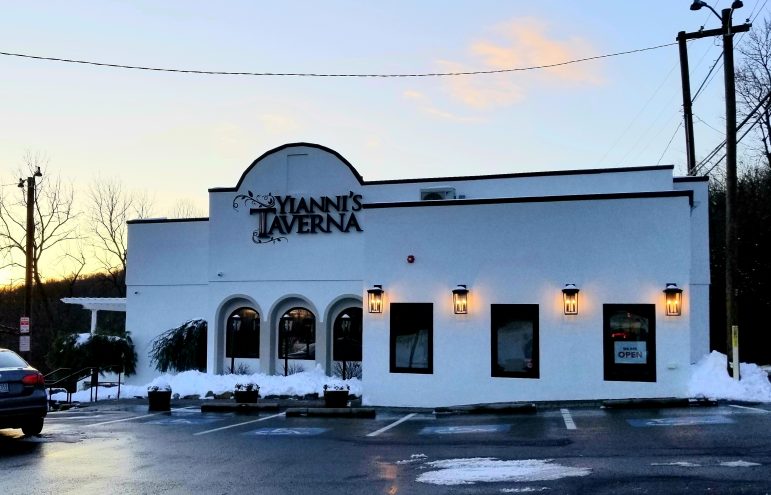 The wintry weather likely left many people dreaming of warm destinations, like the Greek islands. The closest you’ll get to them in Saucon Valley is Yianni’s Taverna, a popular Greek restaurant that recently reopened in Lower Saucon Township. 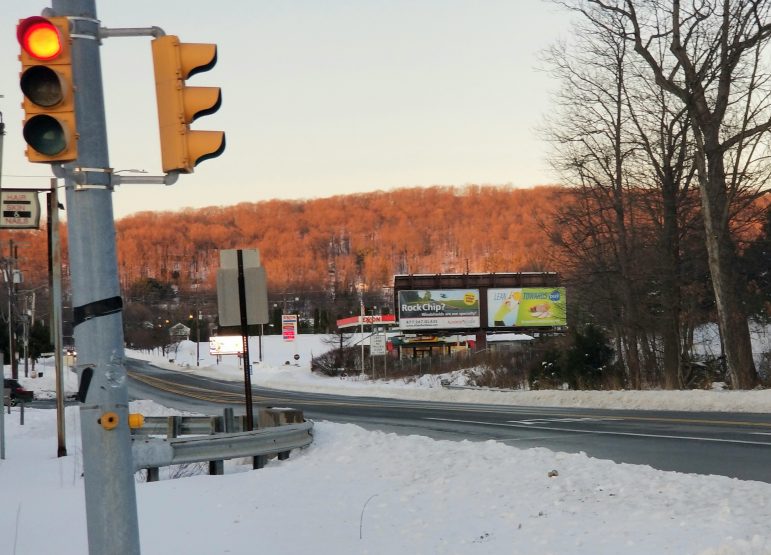 Traffic around 4 p.m. Thursday was much lighter than normal, as this view of Rt. 378 in Lower Saucon Township shows. 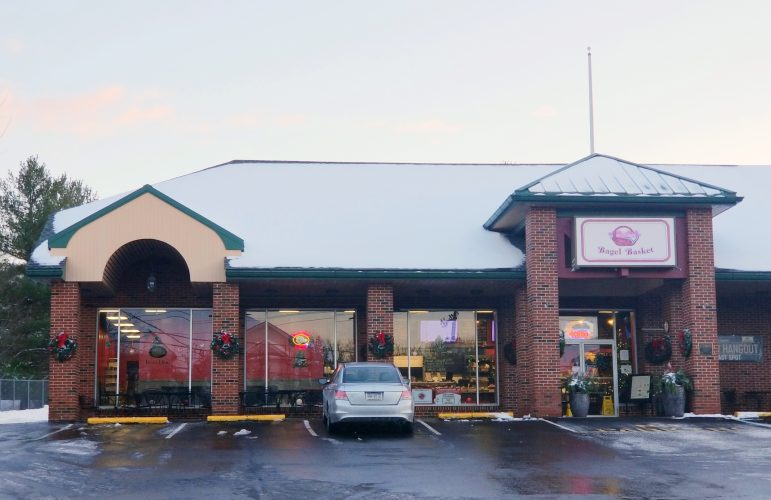 Customers had no problem getting to the Bagel Basket on Friedensville Road in Lower Saucon Township. The parking lot was easy to navigate following earlier snow removal. 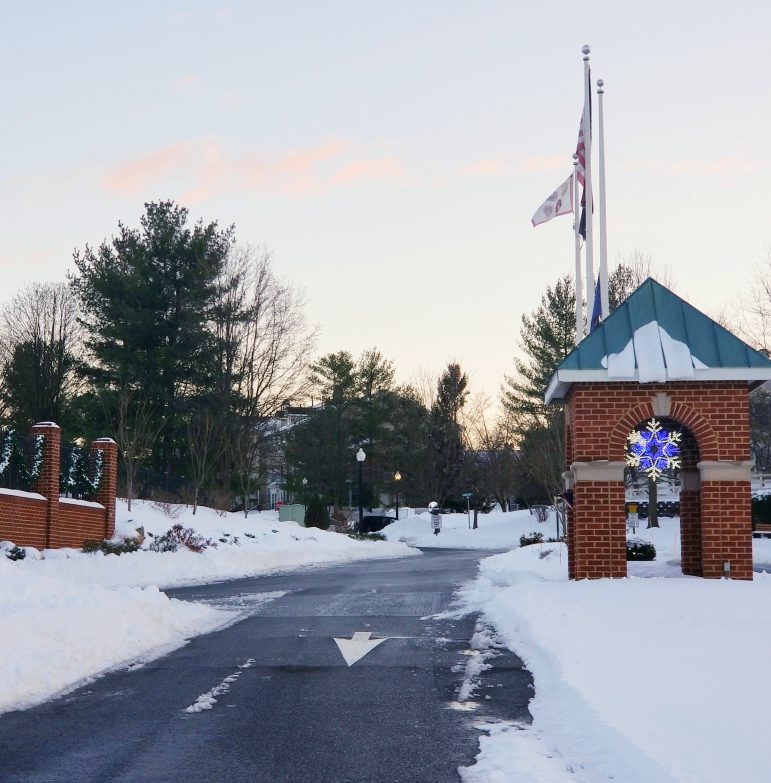 The festively decorated entrance to the Society Hill complex in Lower Saucon Township was plowed down to blacktop. 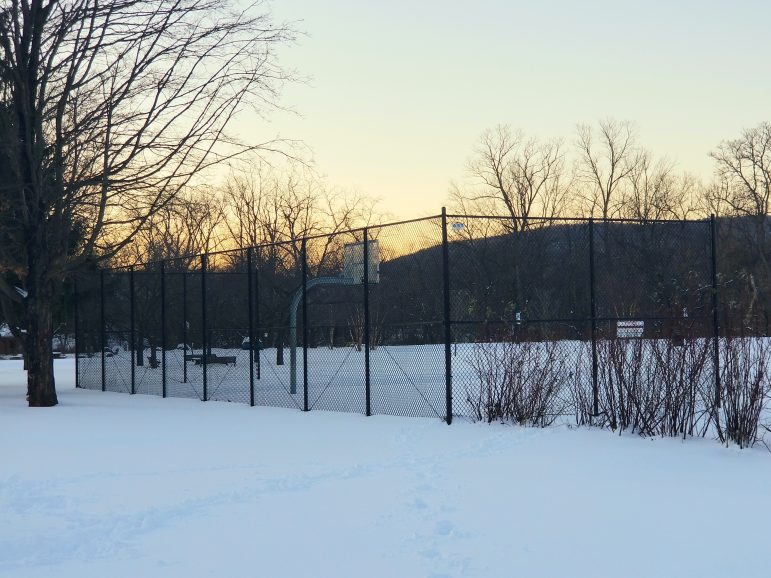 Basketball at Hellertown’s Water Street Park will have to wait til another day. The popular courts were snow-covered and silent at sunset Thursday. 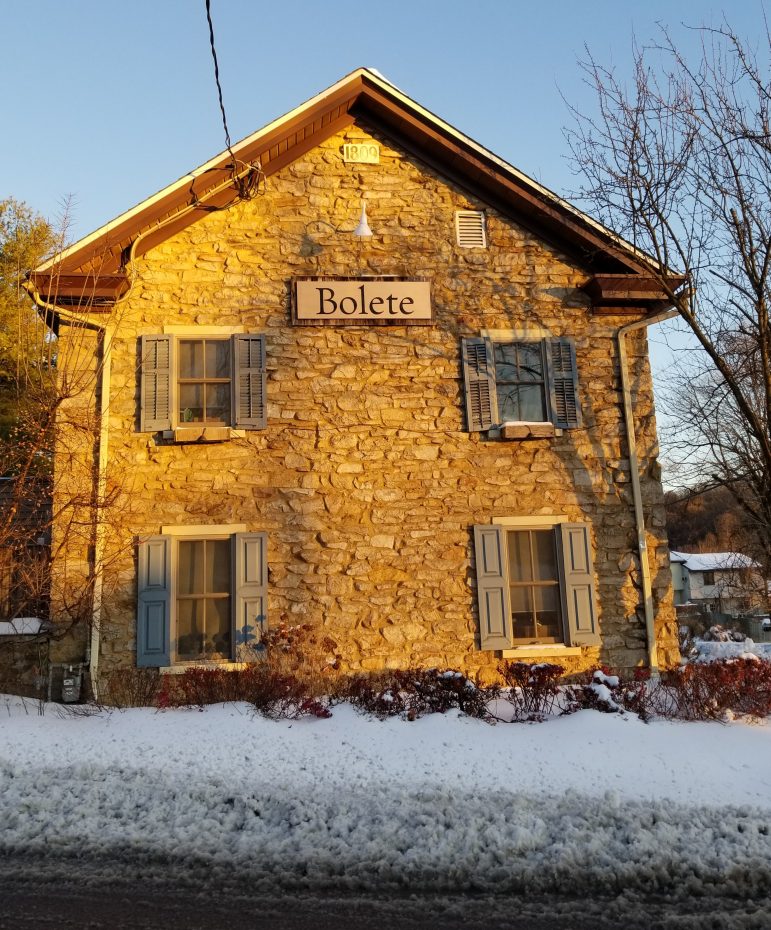 Thursday’s setting sun cast an orange glow on Bolete, an acclaimed restaurant located in a historic stone building at Seidersville Road and Broadway in Salisbury Township.