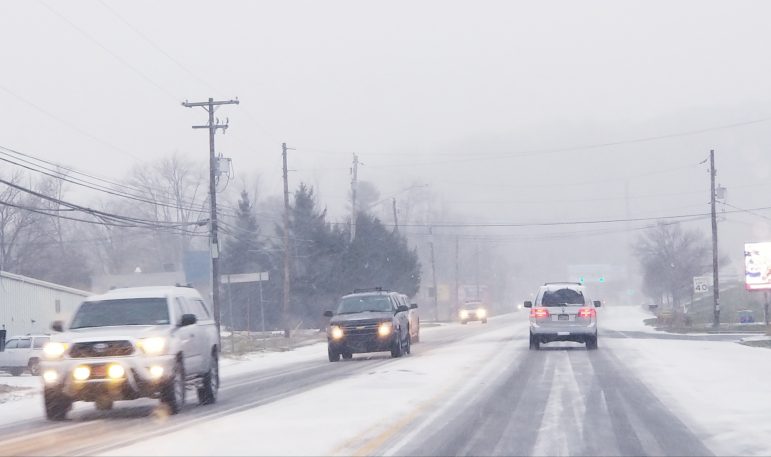 Traffic moves along Rt. 378 in Lower Saucon Township Wednesday afternoon after snow from a major storm began to fall.

A powerful winter storm invaded the Lehigh Valley Wednesday afternoon and brought with it the expectation that as much as 20 inches of snow could be deposited on the area.

Light snow began falling in Hellertown around 2 p.m., after Saucon Valley and many other school districts dismissed students early, so buses wouldn’t be on the road as the snowfall intensified.

Indeed, by mid-afternoon, steadier snow had begun to fall on places like the Promenade Shops at Saucon Valley, where shoppers filled The Fresh Market and the Wine & Spirits Shoppe in search of last-minute supplies.

Much of Pennsylvania and parts of New Jersey remain under a winter storm warning issued by the National Weather Service for 12 to 20 inches of snow, which it said could be accompanied by wind gusts of up to 40 mph.

The wind and heavy snow have the potential to cause power outages, the NWS said in a warning statement Wednesday afternoon.

Travel during the overnight hours and early Thursday morning is expected to be “difficult to impossible” due to the combination of snow and wind, it said, and the NWS warned anyone who must travel to keep an extra flashlight, food and water in their vehicle.

State and local officials have advised residents to stay off roads if at all possible, in order to stay safe and help road crews plow and salt the thoroughfares more effectively.

PennDOT reminded motorists “to allow plenty of space when driving near plow trucks.”

“Also, for their own safety and the safety of plow operators, motorists should never attempt to pass a truck while it is plowing or spreading winter materials,” it said in a news release Wednesday.

PennDOT has also temporarily reduced the speed limit on I-78, Rt. 33 and other highways to 45 mph, because of the storm. Late Wednesday afternoon it announced that it is also restricting certain types of traffic because of the snowstorm’s severity.

Fountain Hill, Hellertown, Lower Saucon Township and many other municipalities in the Lehigh Valley are under snow emergencies, which may mean different things depending on the municipality. In more urban areas like Fountain Hill and Hellertown, vehicles must be removed from designated snow emergency routes or else risk being towed.

In rural Lower Saucon, however, “the declaration of an ’emergency’ by the Township Manager during some…snow events is done solely to extend the driving hours of our snow plow operators so they can continue clearing and salting our roads and streets,” an email from township staff stated.

Pennsylvania Gov. Tom Wolf signed a proclamation of disaster emergency in anticipation of the winter storm, which is expected to produce the most snow the area has seen in years. The last significant snowstorm to affect Saucon Valley dropped several feet of snow on Hellertown, Lower Saucon Township and surrounding areas in January 2016.

Precipitation is forecast to end Thursday morning, with cleanup likely to take much of the day.

Some sleet may mix with the snow in the Lehigh Valley and areas further south, which could reduce snowfall amounts. However, the Poconos and other parts of northern and central Pennsylvania are expected to receive two feet or more of fresh powder.

If you’re snowbound over the next day or two, be sure to check out the entries and vote in our 2020 Holiday Lights Contest & Tour, which is co-sponsored by Blair Custom Homes Inc. and Bob’s Valley Wide Carpet Care. The story includes a gallery of photos, a voting form and a map of the featured homes and businesses, so you can view and enjoy their lights in person once the roads are clear. 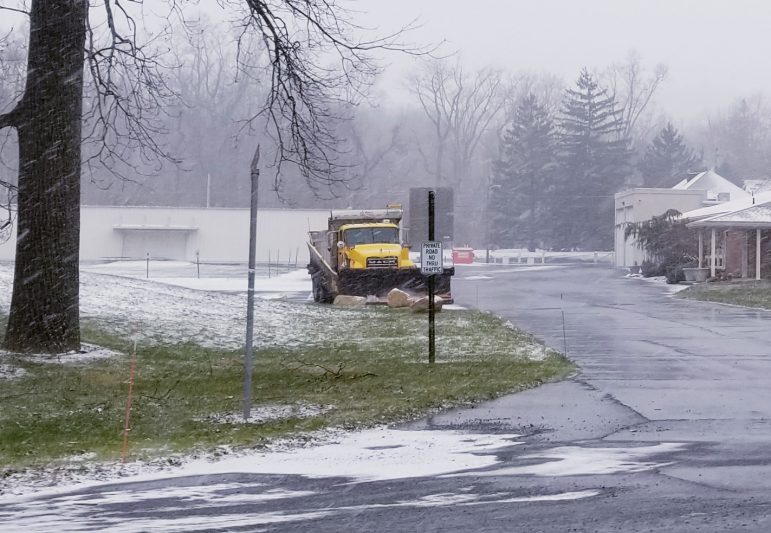 A plow truck sits parked in the lot of the Se-Wy-Co banquet facility on Rt. 378 in Lower Saucon Township Wednesday afternoon. 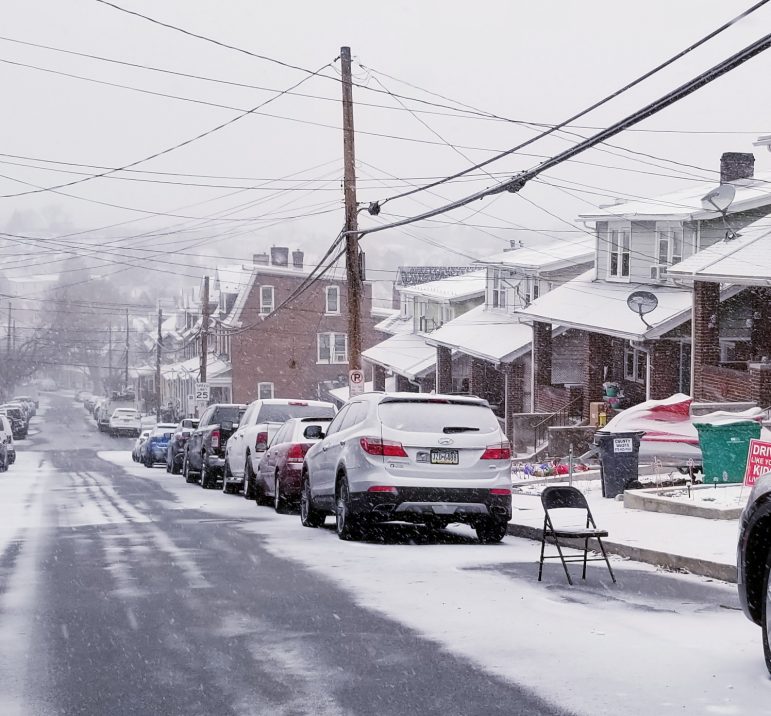 Snow falls on Fiot Street in South Bethlehem, where a resident attempted to save an on-street parking spot with a folding chair. 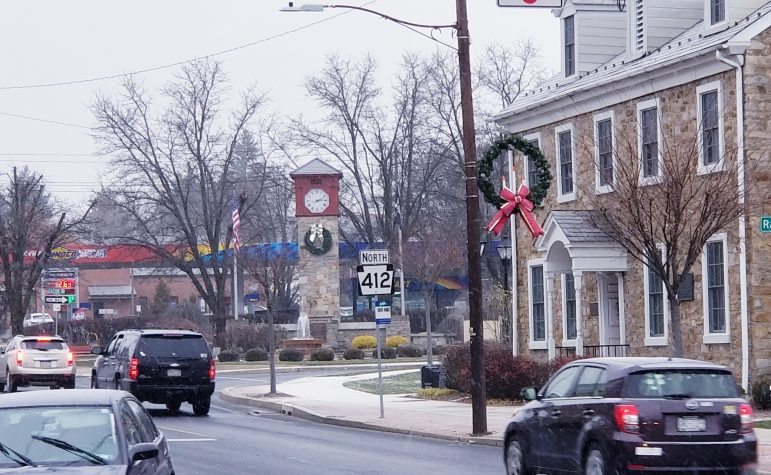 Fine flakes began to fall on Hellertown around 2 p.m. Wednesday. Though light at first, the snow’s intensity steadily increased as the afternoon wore on. 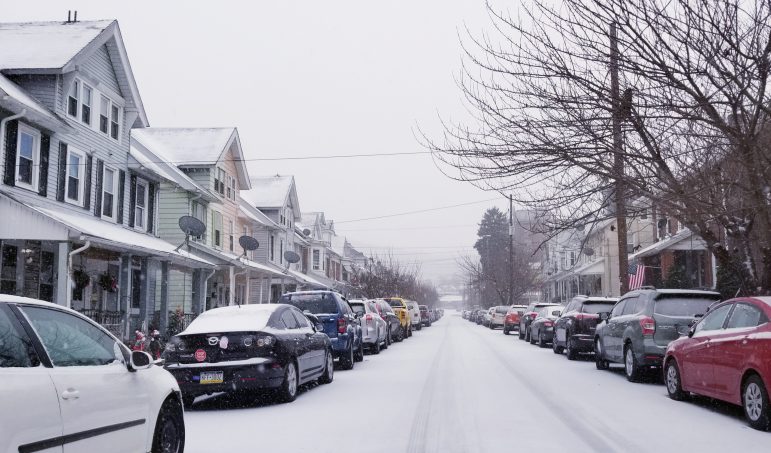 The 1000 block of Seneca Street in Fountain Hill was snow-covered by 3 p.m. Wednesday. 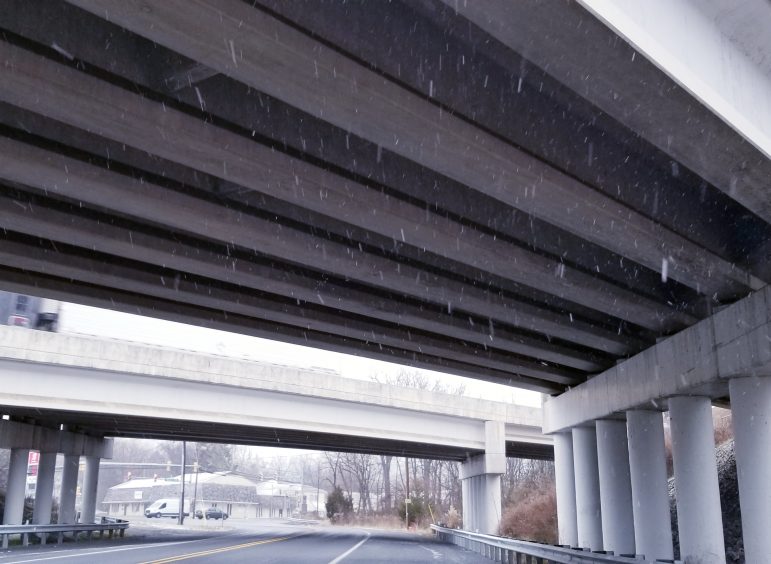 Falling flakes are visible under the I-78 overpass on Black River Road in Lower Saucon Township Wednesday, after a winter storm moved into the area. 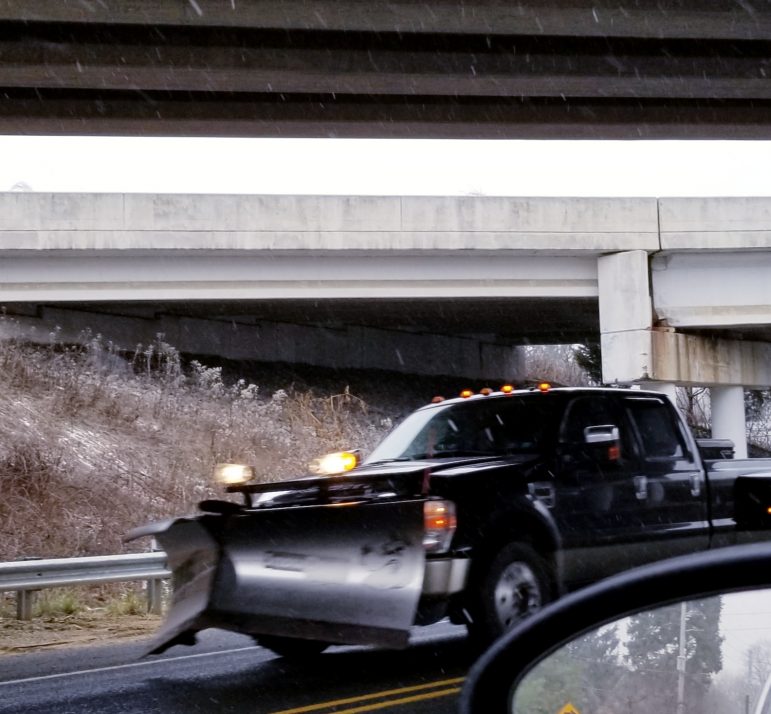 Plow trucks were a common sight on area roads throughout the day Wednesday, as many were moved to strategic locations before the storm began. 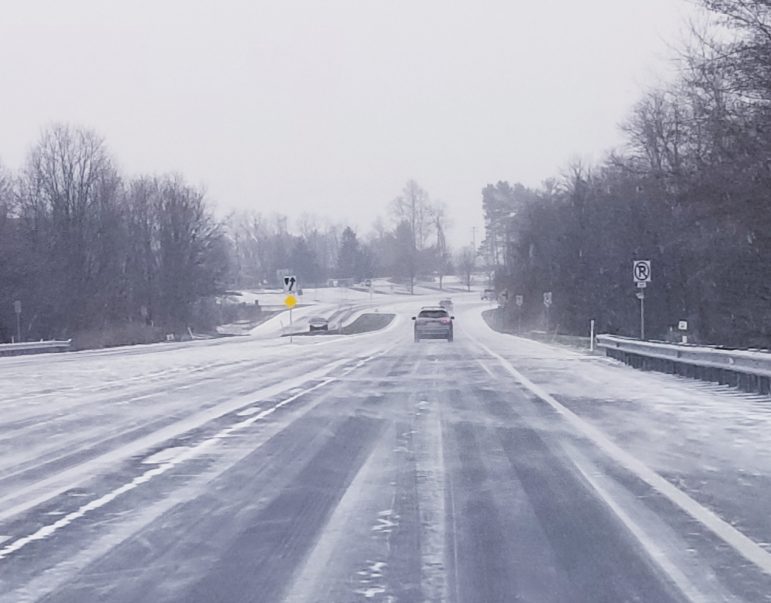 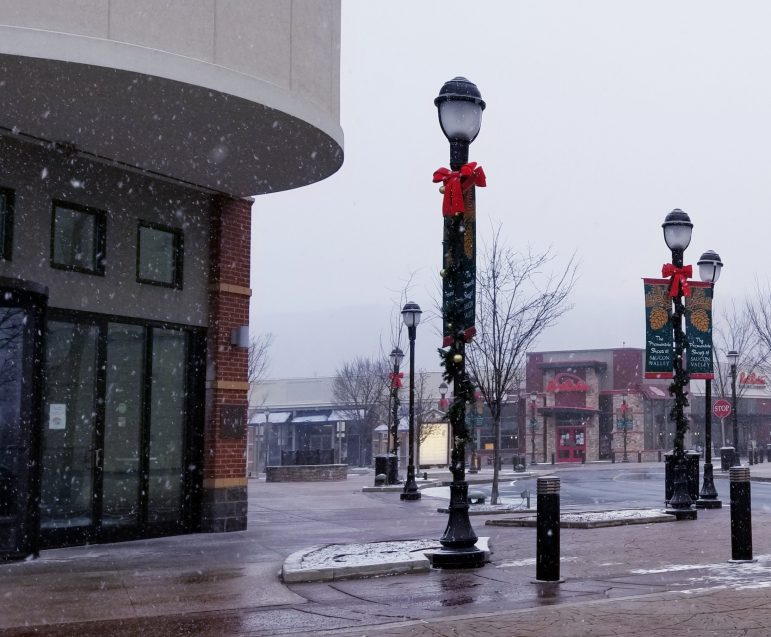 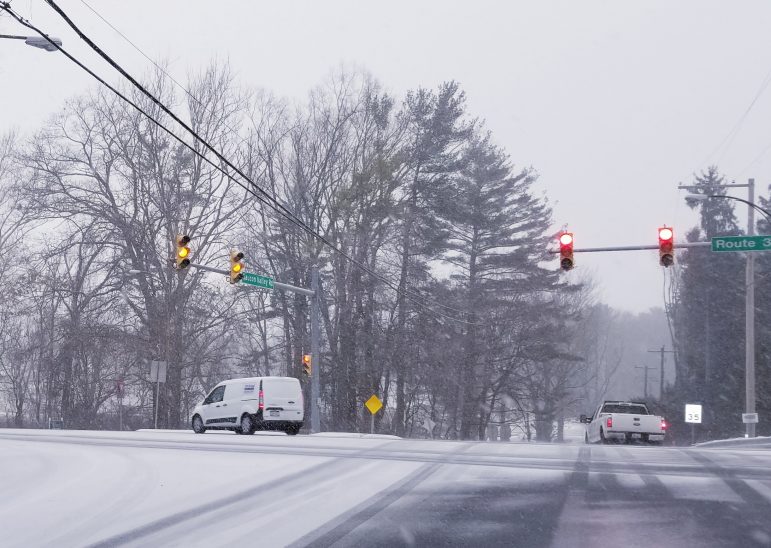 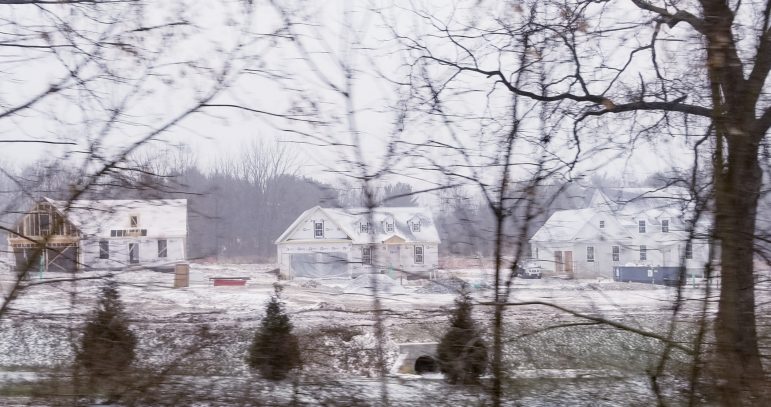 Houses under construction at The Cottages at Old Saucon were dusted with snow by mid-afternoon Wednesday, as a winter storm began to intensify. 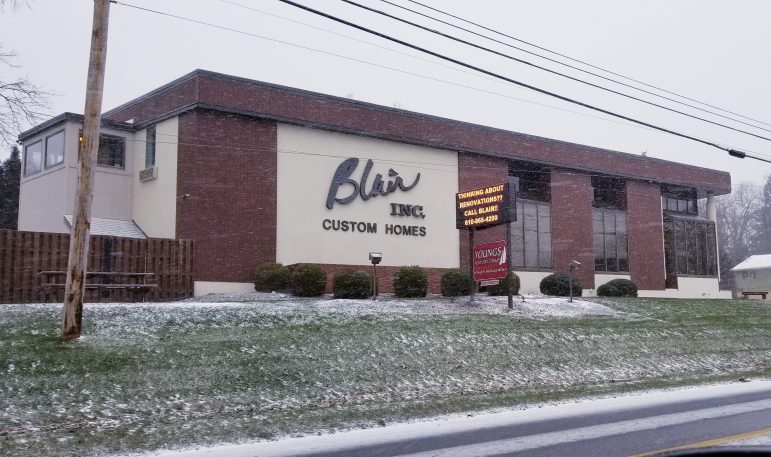 Snowflakes whipped past the offices of Blair Custom Homes Inc. on Rt. 378 in Lower Saucon Township as the winter storm moved closer to the region. 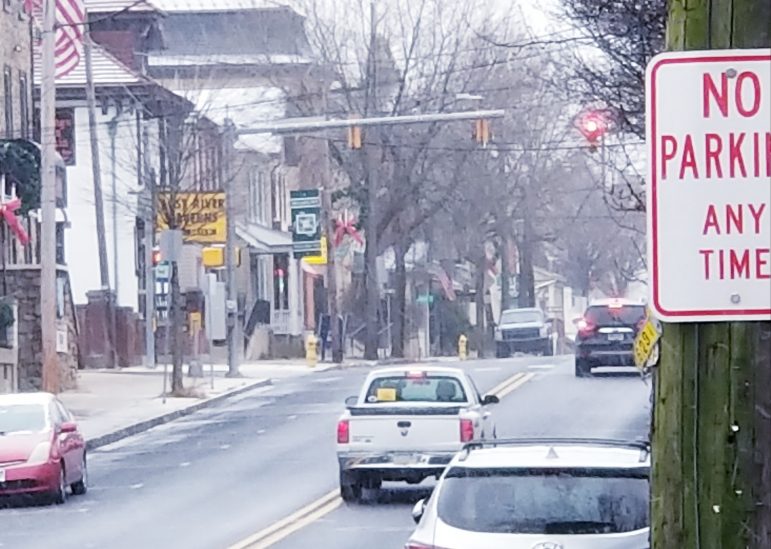 By mid-afternoon Wednesday, traffic was light on Main Street in Hellertown. Schools dismissed students early, and many residents appeared to have run errands earlier in the day. 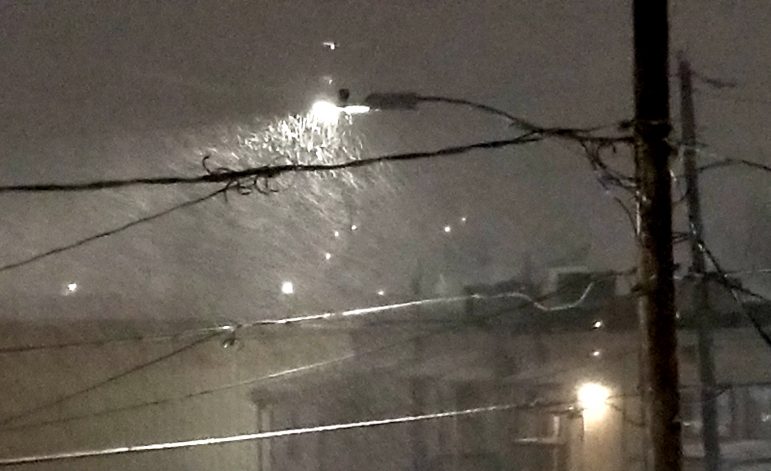 By nightfall, heavier snow was falling in the Lehigh Valley, with visibility reduced to a half-mile or less in some areas.