Pennsylvania’s legalization of most fireworks for consumer sale in 2017 has resulted in a huge increase in sales, which is why many police chiefs now issue annual reminders to residents about fireworks safety and the rules that exist for their use in their community.

“Now that the summer and holiday season are upon us there have been some uestions regarding the Borough’s Fireworks Ordinance,” Shupp said in the open letter to residents. “The ordinance can be found on our website if you would like to review it further, but I will touch on the main points.”

The Hellertown fireworks ordinance includes the following stipulations, which are based on the 2017 state fireworks law, also known as Act 43 of 2017.

First, fireworks are only legal for possession and use by individuals who are 18 or older.

Additionally, there are five prohibitions that apply to the ignition and/or discharge of consumer fireworks in the borough:

The requirement that fireworks may not be exploded within 150 feet of any occupied structure is significant because it means most borough homeowners may not explode them in their yards, due to the relatively small size of most residential lots in Hellertown.

“There are very few places where people can shoot them off (legally) within borough limits,” borough council president Tom Rieger explained in June 2019.

Ordinance 824 also states that consumer fireworks shall not be ignited or discharged on streets, sidewalks or any property owned by the Borough of Hellertown, including parks.

Consumer fireworks may only be discharged before 10 p.m. under the ordinance, and anyone violating the ordinance “shall have their fireworks confiscated and destroyed and the owner shall be responsible for the storage and destruction of the fireworks,” it says.

Violators are also subject to a fine of not more than $1,000 per violation, and may be imprisoned to the extent allowed by law for the punishment of a summary offense.

“​Please be safe and remember to be courteous to your neighbors and other residents of the Borough of Hellertown,” Shupp said in his email.

Upper Saucon Township officials last week addressed concerns about the use of consumer fireworks; concerns which were raised in a letter from a representative of a large local homeowner’s association.

Both a supervisor and the township solicitor said municipalities’ hands are essentially tied on this issue by the state law, because under it they cannot impose additional regulations on the possession or sale of consumer fireworks. 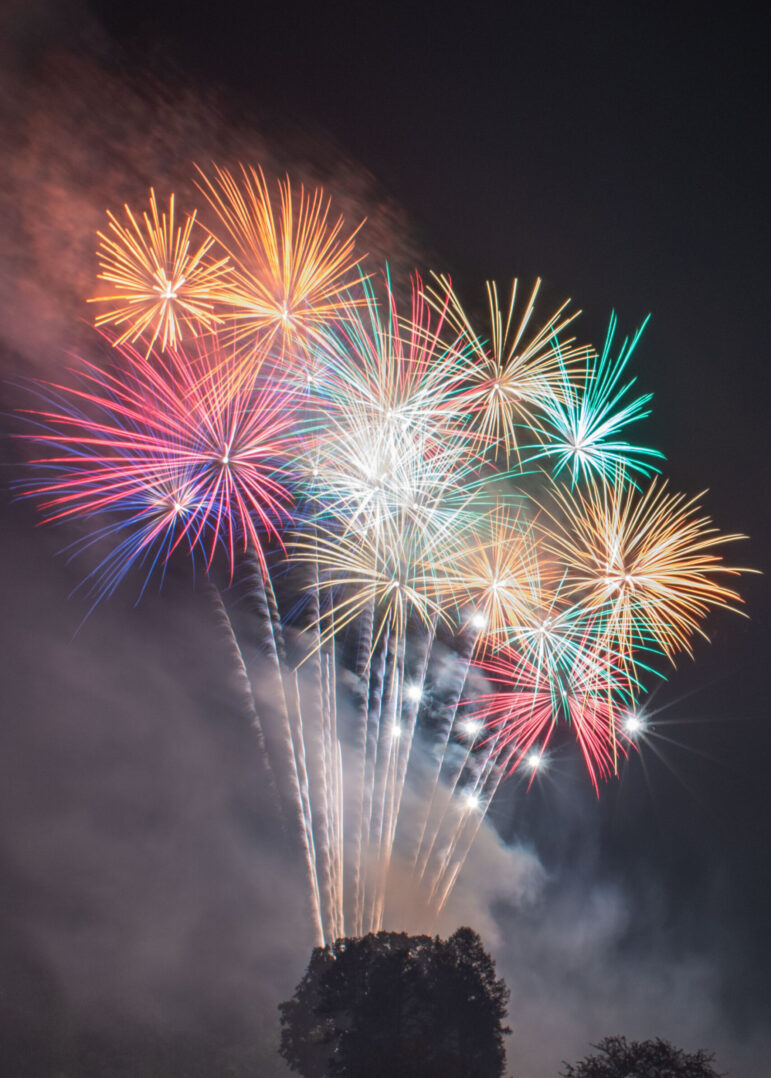 Fireworks shot off from the Steel Club property explode high in the sky above Hellertown in August 2020. (FILE PHOTO)

Hellertown’s community fireworks show is not held on the Fourth of July, but rather on a Friday night during the week of Dewey Fire Company’s annual carnival, which is held in Dimmick Park. This year’s carnival is scheduled to be held Tuesday, July 13 through Saturday, July 17.

There is also a GoFundMe Charity page set up with a goal of raising $12,000 toward next year’s and future Dewey fireworks shows.

“The fireworks do come at a significant cost to Dewey Fire Company (~$12,000) and while we love providing them for the community, it is becoming more and more difficult to be financially sustainable and incur expenses such as these each year,” the GoFundMe page description says. “So we are asking for any help that you could contribute to help us be able to continue to provide fireworks for the community for years to come. The generosity of the community allows us to pay for fireworks last year and this year, so this campaign is in preparation of fireworks for 2022 and funds raised in this campaign will ensure the continuation of this tradition.”

Community and business donations totaling nearly $20,000 helped make the 2020 Dewey fireworks show–which was held at Steel Club last August–a reality. Excess money that was raised would be set aside to help pay for this year’s show, officials said last July.