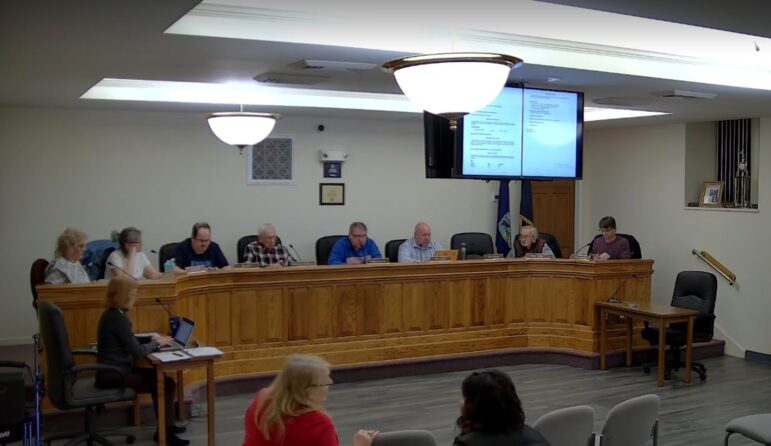 Above, Fountain Hill Borough Council meets at Borough Hall on Jan. 18, 2023. Council meetings are livestreamed on Facebook, where recordings of them can also be viewed on the borough’s page. (Credit: Borough of Fountain Hill/Facebook)

Fountain Hill Borough Council’s meeting Jan. 18 was a tale of decisions already made as well as some things still to be decided.

Preceded by a recreation committee meeting and a rare borough planning commission meeting, a few key items from those meetings were discussed at the council session.

The planning commision heard a petition by attorney Joe Piperato on behalf of his clients–Lehigh Valley restaurateur-developer Donnie Petridis and Carlos Travanos of Joao Construction–to amend the borough’s zoning ordinance; a change that would allow an apartment building project they proposed last year to advance. The commission voted to recommend the change, which would reduce the required lot size square footage from a minimum of 3,000 square feet per dwelling unit to 1,150 square feet per dwelling unit for new multi-family dwellings in the borough’s Town Center zoning district.

“It was also on the table to (change) it borough-wide, and they elected–and eventually it was a unanimous vote–to make a recommendation for town center only,” borough manager Eric Gratz told council.

The next step in amending the zoning ordinance is for the borough solicitor to write an amendment to the current law that will be advertised for possible adoption by council.

The property Petridis and Travanos want to develop at 940 Cherokee Street currently includes a two-story apartment building and an adjacent parking lot.

Borough council member Jamie Johnson reported on the discussion the recreation committee had, which she said included pay rates for pool employees.

Fountain Hill’s pool was closed last summer and it is still unclear if it will be able to open for the upcoming swimming season, even as a grassroots coalition of borough residents is meeting and coordinating with borough officials to make a reopening a reality in 2023.

“We did have a lengthy discussion on the pool. We understand that staffing is going to be the number one determinant–not just lifeguard staffing, but cashiers as well–in regards to opening the pool,” said Johnson, who added that she will work with Gratz to put the summer staffing discussion on council’s February meeting agenda.

The committee also discussed an effort to secure a grant or other funding source for a new pickleball court which is proposed for where an underused sand volleyball court is currently located in the borough park on Stanley Avenue.

“The big cost, it seems, is going to be fencing for that,” said Johnson.

She said there had been a discussion recently with St. Luke’s officials regarding the pickleball court and a possible donation to help fund its construction.

“It’s just a matter of finding the manpower and the funding, but we can work on that,” said Gratz.

The borough’s police department would like more signage to make parents aware of it and a parking ordinance amendment so violators may be fined if necessary, he said.

Resident Iris Kale brought up another issue with student drop-offs and pickups. She said when there’s snow it blocks parking areas and has created an issue along Moravia Street.

Gratz said Fountain Hill’s small public works department has to prioritize clearing snow emergency routes like Delaware Avenue but would try to address other problem areas if possible, though he said coordinating a solution with the school district would be better.

“Even in small snowfalls, we handle a tremendous amount of concerns from residents who want every–you know, they want their area cleared,” he acknowledged.

The next Fountain Hill Borough Council meeting will be held Monday, Feb. 6 at 7 p.m.