With less than 48 hours until a snowstorm is expected to begin, forecasters are urging residents of eastern Pennsylvania to prepare for potentially record-breaking accumulation and possibly significant disruptions to work, school and other activities.

The latest, “second call” prediction by forecasting outlet PA Weather Action is for the storm to drop up to 15 to 20 inches across a roughly 50-mile wide swath from south central to east central Pennsylvania and into northern New Jersey.

Lead forecaster Josh Adams called the storm potentially “historic,” meaning it could break December records for snowfall that have stood for decades.

The storm being tracked is likely to be a two-day weather event, with snow expected to begin in eastern Pennsylvania early Wednesday afternoon. The snow is expected to increase in intensity during the evening, which is when Adams said “intense banding” with snowfall rates of up to 3 inches per hour could set up across parts of the state.

The last time the Lehigh Valley area experienced a winter storm of that ferocity was in late January 2016, when a coastal system dropped nearly three feet of snow on the area.

Major snowstorms don’t impact the Lehigh Valley every year, and when they do they more commonly strike during the months of January, February and March.

The fact that this pre-holiday storm could temporarily close transportation routes in the midst of a deadly pandemic, when shipments of a new vaccine are being rushed to hospitals nationwide, is no doubt of concern to federal, state and local government officials.

Adams said the storm also has potential to affect electricity in the Northeast, where outages may be possible due to the combination of strong winds and snow that is expected.

In the immediate aftermath of the snowstorm, temperatures are currently predicted to be below normal, with highs in the low 30s and lows in the teens for several days.

The National Weather Service has issued a winter storm watch for Wednesday morning through Thursday morning for snowfall in excess of 12 inches.

In a watch statement, the NWS said wind gusts as high as 35 mph could accompany the snow, making travel “very difficult to impossible.”

“The hazardous conditions could impact the evening commute Wednesday and the morning commute Thursday,” it said. “The heavy snow could result in power outages.”

Among the areas covered by the winter storm watch are Lehigh County, Northampton County and Upper Bucks County.

If the storm is still forecast to have a significant impact Tuesday, it’s likely that the National Weather Service will change the watch to a warning. A watch means that a weather event is possible, while a warning means it is likely or imminent. 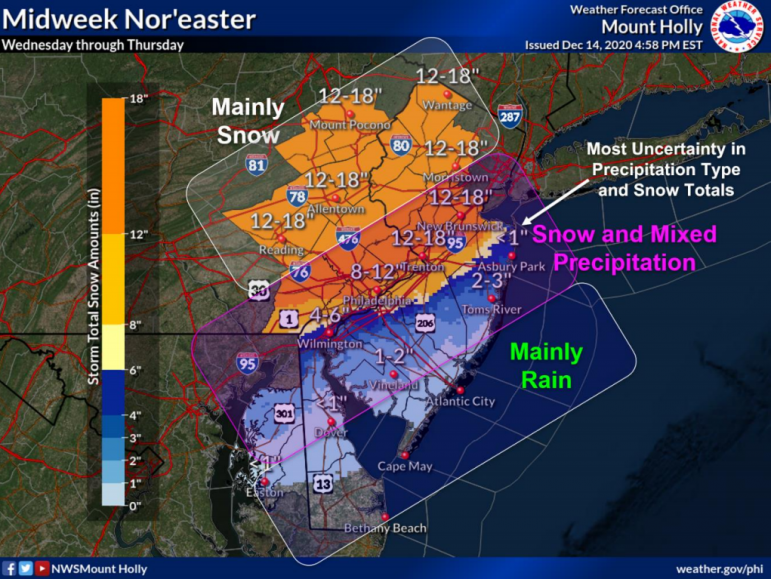 The NWS forecast office at Philadelphia/Mount Holly released this snowfall accumulation map as part of a 6 pm Monday briefing on Wednesday’s potentially historic winter storm. The next storm briefing will be issued early Tuesday morning.

In a 6 p.m. storm briefing Monday, the NWS forecast office at Philadelphia/Mount Holly referred to the storm as a Nor’easter with the potential to dump 12 to 18 inches of snow across the Lehigh Valley and southern Poconos.

Closer to the I-95 corridor and Philadelphia, there is less confidence in potential snowfall totals due to the possibility that the snow will mix with rain or sleet, the forecast office said.

It noted that “snowfall rates could reach 1 to 2 inches per hour for a time late day Wednesday into Wednesday night causing significantly reduced visibility and potentially crippling travel impacts in places.”

The next briefing on the storm will be issued by the NWS at 6 a.m. Tuesday. 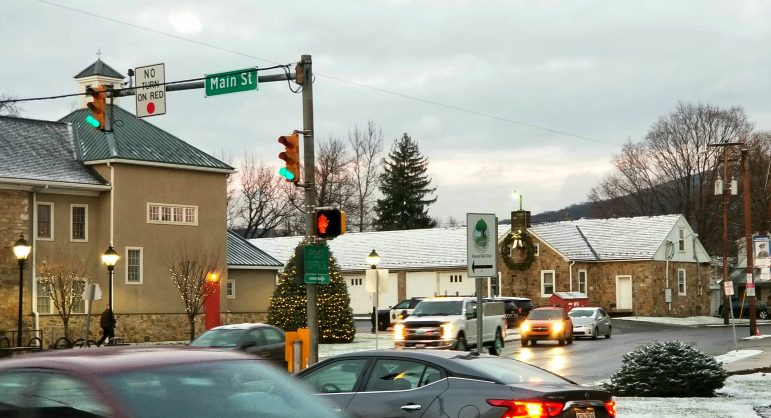 Motorists had no real issues negotiating the streets of Hellertown Monday. Although snow fell for several hours at mid-day, it failed to accumulate on most roads and walkways in town. Wednesday could prove to be a different story, however.

The Lehigh Valley had another taste of winter Monday, when light snow fell during the day and accumulated on vehicles and vegetation. With temperatures around freezing, the snow failed to accumulate on most roads and walkways, which remained wet.

School wasn’t impacted, and it remains to be seen whether students now accustomed to learning online much of the time will enjoy a “snow day,” even if there is a major snowstorm later this week. As long as electricity and Internet service aren’t affected by the weather, all Saucon Valley students have the technology to attend classes at home.

Grocery stores are expected to be busy Tuesday, as are other businesses area residents typically frequent before an expected snowstorm, such as beer distributors.