The seat became vacant in July when councilman Philip “Phil” Weber announced his resignation from his seats on borough council and the borough’s planning commission. Weber cited health concerns at the time of his resignation.

Four candidates applied to fill the seat, which will be held by the appointee until Dec. 31.

The four candidates: Kevin Smith, Andrew Hughes, Tom Opsanick and Richard Weddigen, each briefly addressed council and those in attendance at the meeting.

Hughes has been a Hellertown resident since 2016. He works as a corporate VP for New York Life Insurance and described himself as an information technology security expert. 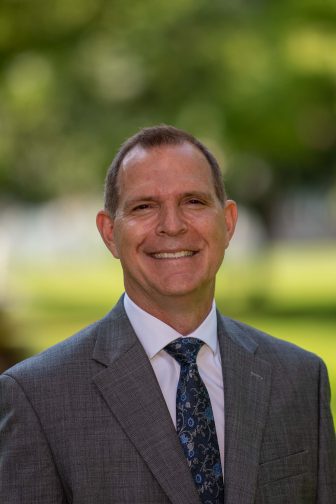 Hellertown Borough Council members voted unanimously to appoint Andrew Hughes to a council seat left vacant following Phil Weber’s resignation in July. With the appointment, Hughes will hold the seat until Dec. 31, 2021. He is a candidate for a four-year term on council, and can also seek retention of the two-year seat in this November’s election. If elected to two different terms on a governing body, an individual must choose which seat to fill, under state law.

A Republican, he was previously appointed to fill a vacant seat on Hellertown Borough Council, but lost his bid for a four-year term in 2019. Hughes, who formerly served on the borough’s zoning hearing board, is currently campaigning for a full council term. If elected, that term would begin Jan. 1, or the day after his current term ends.

Hughes told attendees that he views borough council service as a form of community service.

“I think as we get a little older we look for opportunities to give back to our community, and that perspective, for me, hasn’t changed any,” he said.

He told council he believes his diverse background has prepared him to help Hellertown navigate challenges in the future.

“In my opinion, this is a very unique place to live, raise a family and retire, too,” Hughes said. “I want to do everything I can to preserve that for future generations.”

“I may not have always agreed with the majority,” he said, referencing his opposition to the borough’s 2019 property tax increase, “but you can rest assured that I will diligently and intensely do everything I can to bring value to borough council, and I will always put the interest of Hellertown first.”

Hughes also mentioned that, if appointed, he would donate his borough council salary to a local nonprofit, which is something he did the last time he served on council.

When asked about which issues facing Hellertown he wanted to address first if appointed to council, Hughes stressed the importance of the borough’s ongoing recovery from the COVID pandemic.

“It’s not just financial recovery, but it’s also our psychology of going back to doing things in-person,” he said. “I think our biggest challenge is (getting) back to some level of normalcy.”

After hearing from all four candidates, the six members of borough council voted unanimously to appoint Hughes to the open seat.

“Even though you did not win retention last time, you jumped right on board and served other ways, joining the library, and you’re very involved in the Lions and everything else,” Borough Council President Tom Rieger told Hughes. “You didn’t take a step back, and to me that means a lot, because you’re in it for the benefit of the community.”

Hughes was sworn-in by Hellertown Mayor David Heintzelman, and then took a seat next to the rest of council for the remainder of Monday’s meeting.

Four borough council seats, including the one Hughes was appointed to, are up for grabs in this November’s election.