After Hellertown Borough Council unanimously passed a resolution in favor of the borough remaining part of the Pennsylvania House of Representative’s 136th legislative district Monday, the current representative for the district announced that he is also taking action to try and prevent its relocation to the 131st district from taking effect.

State Rep. Bob Freeman (D-136) said Wednesday that he has written to Chairman Mark Nordenberg of the Legislative Reapportionment Commission requesting that Hellertown be restored to the 136th district as part of the redistricting that is currently under way.

“Hellertown shares a Community of Interest with the other municipalities that comprise the 136th District,” Freeman said in a news release about his opposition to the redistricting that would significantly affect the borough and its roughly 6,000 residents. 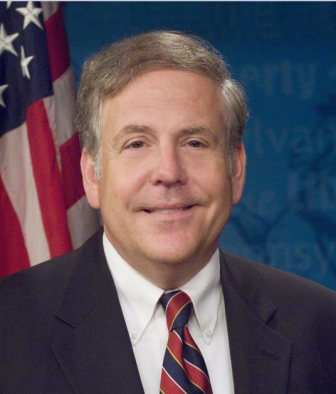 Robert Freeman (D) represents the 136th District in Pennsylvania’s House of Representatives. The 136th District has included the Borough of Hellertown for more than 50 years, but under a proposed redistricting plan it would be moved into the adjacent 131st District. Freeman says he opposes that and will tell the state Legislative Reapportionment Committee that he does in testimony Friday. (FILE PHOTO)

In his letter to Nordenberg, Freeman cited his involvement in the civic life of Hellertown, his assistance with securing funding for the borough and other close associations he’s developed with the municipality over approximately 35 years of service to it.

“I have established a long association with Hellertown, coming to know and work with their elected and community leaders, assisting them in securing funding for important community projects, holding monthly office hours in Hellertown Borough Hall to make myself even more available to meet with constituents and regularly participating in Hellertown’s community events,” he said. “From Hellertown’s Memorial Day ceremony, to participating in their Community Days, Halloween parade, the annual Christmas tree lighting ceremony, and numerous ribbon-cutting events for new businesses on Main Street I have been an active and connected Representative in the community life of Hellertown.”

“The Borough of Hellertown has been a component part of the 136th District for over 50 years, since the 1968 state Constitutional Convention established single member House districts,” Freeman noted in his letter. “In the preliminary reapportionment plan, Hellertown was assigned to the 131st District, a largely Lehigh and Montgomery counties-based district that has little association with the Borough of Hellertown.”

The 136th District is currently comprised of the City of Easton, the boroughs of Hellertown, Freemansburg, Glendon, West Easton and Wilson, as well as Williams Township and parts of both Palmer and Lower Saucon townships. All of it is located within Northampton County.

Freeman said he is scheduled to testify before the state Legislative Reapportionment Commission at their hearing on Friday, Jan. 7 at 10:30 a.m. in Harrisburg, during which he “will make the case for keeping Hellertown in the 136th District.”

The hearing can be viewed online at Redistricting.state.pa.us/.

The 131st District Hellertown could become part of if the current House redistricting plan is ultimately adopted is primarily located in upper Montgomery and southern Lehigh counties, although it also includes part of Lower Saucon Township in Northampton County. That district is currently represented by Milou Mackenzie (R-131).